I often have Christians tell me that they are not able to do what I and some others do. They cannot get up and speak to a crowd, or write books and articles, or do public lobby work. And of course in one sense that is perfectly true: we are all different, and we have differing gifts and abilities given to us from God.

But we all need to speak up and speak out when and where needed. While everyone will not do media interviews or pen great treatises, we all must speak for our faith and for the vital issues of the day. Pretending we are unable is more a case of being unwilling. 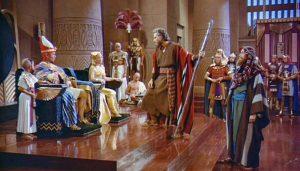 In my daily reading this morning I came across a clear example of this. In Exodus 3 God had appeared to Moses at the burning bush and told him he would use Moses to deliver his people from the grip of Pharaoh. He even promised Moses that mighty signs would accompany him.

But Moses demured. As he famously said to God in Ex. 4:10: “Pardon your servant, Lord. I have never been eloquent, neither in the past nor since you have spoken to your servant. I am slow of speech and tongue.” But the Lord was not very thrilled with that response. As we read in verses 11-17:

The Lord said to him, “Who gave human beings their mouths? Who makes them deaf or mute? Who gives them sight or makes them blind? Is it not I, the Lord? Now go; I will help you speak and will teach you what to say.” But Moses said, “Pardon your servant, Lord. Please send someone else.” Then the Lord’s anger burned against Moses and he said, “What about your brother, Aaron the Levite? I know he can speak well. He is already on his way to meet you, and he will be glad to see you. You shall speak to him and put words in his mouth; I will help both of you speak and will teach you what to do. He will speak to the people for you, and it will be as if he were your mouth and as if you were God to him. But take this staff in your hand so you can perform the signs with it.”

Moses had offered other questions/objections before this, and more were to follow. But when God calls someone, he equips them as well, so there are to be no excuses. As the old saying goes, God does not call the qualified, but he qualifies the called.

Peter Enns in his commentary on Exodus mentions some other Old Testament characters whom God had called and says this:

Some of these narratives seem to go out of their way to mention the mundane or ordinary vocation the leaders were engaged in at the time of their calling. A primary factor in God’s choice was not the individual’s résumé or experience. Rather, he calls people out of ordinary circumstances for extraordinary tasks.

We find similar things in the New Testament where we are told not to worry about our speaking abilities, etc. For example, in Luke 12:11-12 Jesus says this: “When you are brought before synagogues, rulers and authorities, do not worry about how you will defend yourselves or what you will say, for the Holy Spirit will teach you at that time what you should say.”

So it may be high time for many believers to stop making cheap excuses and to start speaking up when required. And this idea of God assisting us along the way does not absolve us of the responsibility to study and be properly prepared. We are to ‘study to show ourselves approved’ as Paul commanded.

No faithful pastor would get up in front of his congregation every Sunday without a scrap of sermon preparation. He of course prays for God’s utterance and Holy Ghost enabling and empowering, but he also carefully studies the text and does his proper spiritual and theological homework.

And I am not just speaking about preachers and pastors here. All believers can and should speak out when opportunities arise. Whether it is sharing our faith, or acting as salt and light, we need to break out of our silence and lethargy and start being vocal.

As but one practical example of this, right now submissions on religious freedom are being called for. We have a few more weeks to get in submissions to this government body: pmc.gov.au/domestic-policy/religious-freedom-review

As I have said often before, you need not put in a 30-page paper with 100 footnotes. Even a paragraph in which you state your concerns will suffice. The point is to let our voices be heard. And the critical thing here is not to fall into the trap of thinking, ‘Well, someone else can do it’.

No, YOU are the someone else. You should be doing something. A short submission into this inquiry is the least any Christian can do. Do not leave this for “the experts”. This is your chance to shine. Do not be like Moses and complain about not being eloquent. Just put pen to paper, or fingers to keyboard.

When Moses said, “Pardon your servant, Lord. Please send someone else,” recall that “the Lord’s anger burned against Moses.” You and I don’t want to be in that place. The time for making lousy excuses is over. Far too much is at stake. Our faith is under assault, millions are heading to a lost eternity, and our culture is crumbling all around us.

It is time to speak up. The days of silence are over. Indeed, silence is consent. If we are not taking a stand against the evil of our day, we are effectively siding with those destroying our culture and hamstringing our faith. And our God will not hold us guiltless if we do remain silent.

As God told the Apostle Paul in Acts 18:9-10: “Do not be afraid; keep on speaking, do not be silent. For I am with you.” That is the key: God is with us, so we have absolutely no reason to remain silent. To refuse to speak is to disobey God.

Let me finish with a few stirring quotes from Christians and non-Christians alike. I hope they inspire you to break out of your ghetto of silence, and motivate you to start speaking out on the things that matter:

“Silence makes cowards out of the best of men” Abraham Lincoln

“I am only one, but I am one. I cannot do everything, but I can do something. And I will not let what I cannot do interfere with what I can do.” Edward Everett Hale

“There may be times when we are powerless to prevent injustice, but there must never be a time when we fail to protest.” Holocaust survivor Elie Wiesel

“A dog barks when his master is attacked. I would be a coward if I saw that God’s truth is attacked and yet would remain silent.” John Calvin

“Nobody makes a greater mistake than he who did nothing because he could only do a little.” Edmund Burke

“If you are neutral in situations of injustice, you have chosen the side of the oppressor.” Desmond Tutu

“It’s not enough that we do our best; sometimes we have to do what is required.” Winston Churchill

“At the final bar of judgment, when those of us who are Christians stand face to face with our Maker, the gravest charge that will be made against us will be that we were so unconcerned. We lived at a time and in an age when the very foundations of civilization were being shaken, when the very world in which we lived was rocking, when we witnessed things such as men have never seen before. We saw the spiritual and moral, as well as the political, declension all around us, and yet we did nothing about it. We were apathetic and unconcerned. We did not feel a great solicitude that would not allow us to rest by day or by night.” Martyn Lloyd-Jones