In my continuing series on Bible study helps, designed especially for those who have committed to read the Bible through in a year, beginning on January 1, you should now be starting on the book of Leviticus. It is the middle volume of what we call the Pentateuch, the authorship of which is traditionally ascribed to Moses.

Those who have read a bit over three chapters a day would have made it through Genesis and Exodus. Those books are mainly historical narrative, but the second book started giving us law – lots of law. And so it will continue through the rest of the Pentateuch. 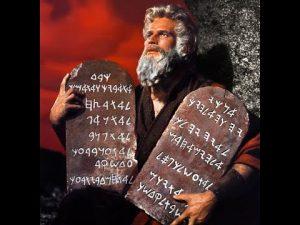 Briefly, Leviticus gets its name from the priestly tribe of the Levites, and deals extensively with various law. Numbers has to do with various numberings (censuses) of the people; instructions on the tabernacle; and an account of the wilderness wanderings. Deuteronomy (second law) repeats many of the laws found in Exodus (eg., the Ten Commandments are found in Ex. 20 and Deut. 5); and discuss how the Israelites are prepared to enter Canaan.

So from Exodus 20 to the end of Deuteronomy, much of the last three and a half books of the Pentateuch deal with law. And it is at this point where a lot of Christians can put up the white flag of surrender and just give up, overwhelmed by all the laws and how to understand them.

As I just read in James Todd’s new book, Sinai and the Saints, Christians try a New Year’s resolution to make it through the whole Bible, beginning with Genesis. They are excited about all the action of the first one and a half books of the Pentateuch, but it is all downhill from there as they get to all the law bits:

Your Bible reading plan begins to feel like hard work instead of pleasure; verse after verse of laws have replaced the exciting stories of action and adventure. The thighs and calves of your attention span begin to burn as you read the numerous chapters of laws. In fact, for many Christians, this mountain marks the end of good intentions and the frustration of yet another New Year’s goal gone awry.

Yes this happens far too often. But assistance is available to help you make your way through all these laws. In my piece on the book of Exodus I offered a number of titles looking at the Pentateuch, the law, and the Ten Commandments. You can see those titles here: billmuehlenberg.com/2018/01/16/bible-study-helps-exodus/

Here I am going to bring together all three of the final books of the Pentateuch. I will offer some helpful commentaries on each, and then look at a few other resources from my own website.

A word about my commentary selections. Almost all of the books featured in my lists happen to be commentaries that I own. Thus I at least know something about them and can recommend them. If one of your favourite commentaries is not found here, that may not mean I think it is less worthwhile: it just means I have not yet read it so cannot really say as much about it.

If you do not know what the various commentary series’ acronyms mean, and which sets are worth pursuing, I try to explain that further in this article: billmuehlenberg.com/2010/07/14/how-to-pick-a-good-commentary/

As part of my series on difficult Bible passages, I have written a few on these three books:

And I have penned various devotional articles on the books of the Pentateuch. See here for example:

Finally, since many of you are now starting to read Leviticus, and its major theme is that of holiness, let me offer a few quotes on that topic:

“Holiness is the habit of being of one mind with God, according as we find His mind described in Scripture. It is the habit of agreeing in God’s judgment, hating what He hates, loving what He loves, and measuring everything in this world by the standard of His Word.” J.C. Ryle

“Holiness has never been the driving force of the majority. It is, however, mandatory for anyone who wants to enter the kingdom.” Elisabeth Elliot

“If the Savior has not sanctified you, renewed you, given you a hatred of sin and a love of holiness, He has nothing in you of a saving character.” Charles Spurgeon

“I am the Lord, who brought you up out of Egypt to be your God; therefore be holy, because I am holy.” Leviticus 11:45

“Blessed are those whose ways are blameless, who walk according to the law of the Lord.” Psalm 119:1

“Make every effort to live in peace with all men and to be holy; without holiness no one will see the Lord.” Hebrews 12:14