Historian Jeremiah Johnston asks us to imagine what life would be like if there was no Christ and no Christianity. Those with even a rudimentary grasp of history should not have to overly strain their imagination. It should be clear what an enormous influence Christ and Christianity have had on the world for the past two millennia. 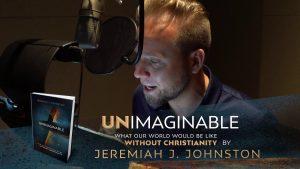 But for those wanting a nice summary and overview of the evidence, this brief (200-page) volume does a nice job of reminding us just why Christianity is so very vital to so much of what we hold near and dear. It would be a radically different world if it were not for what Christ and his followers have achieved.

Simply put, most of the important social goods that we value, whether it is the sanctity of life, respect for women, the stance against slavery, etc., are in large measure the direct result of the growth of Christianity around the globe. It is important that we remind ourselves of these truths, since attacks on Christianity are never ending.

This is not the first volume to cover such matters. Over the years other very helpful books have been penned on the good of Christianity and its impact on human history. Seven such volumes come to mind:

-James Kennedy, What if Jesus Had Never Been Born? Thomas Nelson, 1994.
-Alvin Schmidt, Under the Influence. Zondervan, 2001. (reissued as How Christianity Changed the World. Zondervan, 2004.)
-Rodney Stark, For the Glory of God. Princeton University Press, 2003.
-Rodney Stark, The Victory of Reason: How Christianity Led to Freedom, Capitalism and Western Success. Random House, 2005.
-Jonathan Hill, What Has Christianity Ever Done For Us? IVP, 2005.
-Dinesh D’Sousa, What’s So Great About Christianity? Regnery, 2007.
-Vishal Mangalwadi, The Book That Made Your World. Thomas Nelson, 2011.

So this book adds to and supplements what has gone before. And Johnstone does a very good job indeed of making his case. His book is divided into three parts. The first part looks at what the world was like when Christ first came on the scene. And it was not at all a nice place. He offers this overview:

There was indeed much to be anxious about in the ancient world. By today’s standards, it was hell on earth. Poverty, sickness, premature death, domestic violence, economic injustice, slavery, and political corruption were the givens of life. Absent were any ideas of justice, equality, mercy, democracy (as we know it today), education, and protection of the weak and marginalized.

For example, in the world Jesus entered, it was common and acceptable to simply abandon or kill an unwanted child. (One could argue that as Christianity loses its influence today, that explains in part the rise of the abortion culture.)

But as Johnston demonstrates in this helpful volume, all this started to change when Jesus appeared on the scene. The message Christ came to deliver was a far cry from that of the existing gods and goddesses of ancient Greece and Rome.

Unlike Christ, “the Greco-Roman gods had no love for humans.” Moreover, “the gods were not considered benevolent. The Greco-Roman gods were jealous, petty, vengeful, easily offended, and lustful. The essence of these gods was power and immortality. Most were mean-spirited—against one another and against humans in general.”

This was also a world of massive inequality, where concern for the poor was almost non-existent, and slavery and abuse of women was rife. Perhaps as much as 40 per cent of the population back then were slaves or servants, and women and children amounted to very little.

All this stands in marked contrast of course to the teachings and actions of Jesus. He elevated the status of women and children, and taught the common humanity of all people, where wealth matters little but one’s love of God and neighbour matters greatly.

Part two of the book looks at the various non-Christian or anti-Christian beliefs and worldviews of the past few centuries, and how they so strongly contrast to the beliefs and ethics of Christianity. He briefly looks at the views of a number of these folks: Feuerbach, Darwin, Marx, Nietzsche, Freud and others.

They offer quite a contrast. For example, Nietzsche’s commitment to atheism led him to dehumanise humanity: he “not only did not believe in God, he hated Christianity. In his eyes, following the crucified Jesus meant the refusal of life. Nietzsche also did not believe in equality. Some men were superior to others (and men were superior to women).”

He also promoted suicide and infanticide, urging doctors to kill the handicapped, and urging the elderly to end their lives. Of course bad ideas have bad consequences, and Hitler picked up on the thinking of people like Nietzsche, and we know the bitter fruit of that.

Speaking of Hitler, Johnston looks at him, his beliefs, and his actions in two chapters. Among other things, he rebuts the faulty notion that Hitler was in any way or shape a Christian: “His was a strange, incoherent, mystical religion that had its roots in paganism more than anything else.”

Part three of the book looks at some of the major benefits that Christ and Christianity brought to the world. We have already hinted at some of them, but clearly the vital importance of the value of life and human dignity which is a central feature of Christ’s teaching and Christianity’s witness must be discussed.

In addition to helping end slavery in the West and defend the value of the unborn, the weak, the vulnerable, the marginalised, and the elderly, Christianity has always led the way in helping others, even those not in the Christian fold. Says Johnston:

While the early church faced massive disadvantages – persecution, social, political and cultural hostility, etc. – it spread rapidly and soon became the primary religion. This is because the early Christians followed the pattern of their Lord, showing love and compassion and practical help to the sick, the needy, the despised and the vulnerable.

The world would be an altogether different place – and a much worse place – if Christ had never been born. But because he was, and his followers took his message and his methods everywhere, the world today is completely different.

We do not need to imagine what it is and has been, thanks to Christ and his disciples.

4 Replies to “A Review of Unimaginable. By Jeremiah Johnston.”