All over the West folks are getting fed up with business as usual. We have had the Trump revolution, Brexit, and other tangible signs of a major shift in how politics is being done in the West. As the tired-old two-party system proves to be moribund and increasingly irrelevant, fresh new faces and fresh new political arrangements are arising.

In Australia I and others have long lamented the monochrome nature of the federal Labor and Liberal parties. They are increasingly becoming mirror images of each other. This in large part is because the once great conservative party of Menzies keeps moving leftwards, most notably under the leftist Malcolm Turnbull. 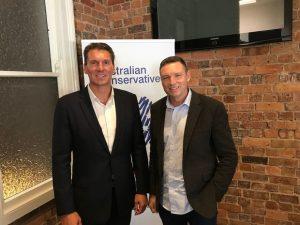 Many of us have looked to smaller parties to meet the need. The creation of the Australian Conservatives party under Cory Bernardi was one such development we applauded. I have written about them several times now, eg: https://billmuehlenberg.com/2017/06/26/demise-libs-ever-expanding-bernardi-team/

And his team just got better with the addition of former Australian Christian Lobby boss, Lyle Shelton. Of course Bernardi has been getting a number of terrific recruits and defectors from other parties, including Rachel Carling-Jenkins, Bernard Gaynor and Kirralie Smith.

Now with Shelton on board the Australian Conservatives is moving from strength to strength. Hopefully we will soon see some other defections of disgruntled conservatives from the Libs or other parties. It looks like the AC may become the wave of the political future.

Yesterday the Australian media was abuzz with the news that Shelton had stepped down from his leadership role, to be replaced by the capable Martyn Iles. As one news item put it yesterday, Sheldon had various reasons for making this move:

“Last year during the marriage campaign, I felt very much drawn to the political side of things for the partisan side of politics. With that in mind … I’ve decided to make a big step to move back to my home state of Queensland,” Mr Shelton said.
“I do believe that politics needs Christian influence from the inside and political parties need good people from the inside. I want everyone to be very clear that I’m not leaving the battle for the values that you and I hold dear, just simply going to a different part of the battlefield.”

As to his replacement, it said this:

Mr Iles said there had “never been more pressure on people of faith and on the church simply for living out our timeless convictions. Therefore there’s never been a more crucial time in history in Australia for the Church and for Christian people to continue to engage with law and with politics and with culture.”
“With God’s help and by God’s grace, we can continue to accomplish great things for his kingdom in Australia.” ACL Chairman Jim Wallace said Mr Iles would “reach a new generation” and “help us prepare for these religious freedom challenges that are already starting to unfold before us”.

And today at his hometown of Toowoomba the official announcement was made that he would join AC. As one news report puts it:

It’s official – Lyle Shelton is now part of Cory Bernardi’s Australian Conservatives party. The former campaigner against marriage equality and figurehead in conservative culture have joined forces to launch Mr Shelton’s new move.
Mr Shelton will be the party’s federal communications director, saying the result of the same-sex marriage postal survey swayed his decision. “I can tell you that Canberra is broken, but there are things in life that are worth fighting for,” he said at the press conference in Toowoomba today.
“The major parties work well for the power-brokers and the winner’s circle. Last year’s plebiscite convinced me to make the switch to partisan politics. It highlighted the lack of conviction from the major parties.” Mr Shelton also discussed the need for Christian faith in Australian culture and politics, and how it had been lost to “political correctness”.
Mr Bernardi said he was proud to have Mr Shelton as part of the team. “Lyle lives by his principles and the party needs people like him,” he said. “We want to make sure our voice resonates in every part of Australia.”

Here we have the dynamic duo in action. Of course it is early days yet, and Shelton has yet to secure a Senate seat of course, and he will have competition in his neck of the woods from One Nation and others. But simply being part of the AC team is a great start, and we wish him every success with a long life in politics.

And the Lord knows we need people like him in our Federal Parliament. As the Liberal Party continues its slow and sad sail into the sunset, we need new faces, new vision, and new commitment to the old verities and values. We need committed Christians who are unashamed to promote basic conservative principles such as the sanctity of life, and the traditional family as the building block of society.

Three cheers for this new recruit. Well done Cory for securing his services. We now need to keep praying for these two champions and their fledgling party. We also must pray for young Iles as he takes over the helm at the ACL. We trust the ACL will also go from strength to strength.

We have had a bit of a reshuffle of the personnel, but the battles continue. Indeed, the war continues, and we need to keep these Christian politicians in our prayers earnestly and regularly. God bless them richly. May they do much for the Kingdom, and for the beleaguered people of Australia.

11 Replies to “Draining the Swamp with the Dynamic Duo”