There are numerous spiritual lessons to be learned from the fourth book of the Old Testament. While many Christians may have given up on reading through the OT by the time they get to Leviticus and Numbers, perseverance is vital. This book is actually a gold mine of spiritual truths.

In chapter 32 we see one such passage. But first, let me offer a bit of background. Way back in Genesis 12 God had promised that the land of Canaan would one day become the possession of his people. They got side-tracked with bondage in Egypt, but a miraculous exodus from there made fulfilment of their promised land possible. 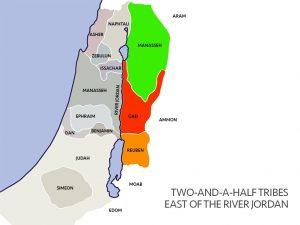 But sin, rebellion and disobedience resulted in 40 years of wandering in the wilderness before they could enter Canaan. As divine judgment, the older generation had died in the wilderness, and a new generation is about to enter the land “flowing with milk and honey”.

Chapter 31 records the first (of many battles), but by the time we get to chapter 32 a major problem has arisen, with some rebellion and disunity in the ranks. The chapter can be laid out as follows:
32:1-5 Two tribes (Gad and Reuben) request to not enter Canaan, but stay east of the Jordan River (where there was good land for their livestock);
32:6-15 The angry response of Moses to their request;
32:16-27 The two tribes offer a compromise counter-offer (accepted by Moses);
32:28-42 How all this pans out.

Moses is rightly upset with this initial request by the two tribes. It demonstrates unbelief and rebellion, and it can only lead to disunity. As Moses said to them in v. 6, “Should your fellow Israelites go to war while you sit here?” He also refers to the story of the 12 spies found in Num. 13.

There we read how ten of the spies returned from Canaan with a negative report, saying it would be a suicide mission to try to take it. Only Joshua and Caleb had a positive report. They walked by faith, not by sight, and they had God’s heart on all this.

They knew there was a twofold effort here: God would give them the land, but they had to go in and take the land. As Caleb said in Num. 13:30, “We should go up and take possession of the land, for we can certainly do it.” And as Joshua said in Num. 14:8, “If the Lord is pleased with us, he will lead us into that land, a land flowing with milk and honey, and will give it to us.”

God gives what he promises, but his people must take possession of it. This is a basic biblical principle. See here for more on this: billmuehlenberg.com/2017/02/25/salvation-cooperation-god-christian-life/

Much can be said about Num. 32 in terms of spiritual lessons, but I want to again emphasise what Moses said in verse 6: “Should your fellow Israelites go to war while you sit here?” Let me seek to make this as relevant and topical as I can, beginning with a very recent Australian news item.

All weekend the media has been abuzz with reports that a Christian lobby group leader has stepped down in order to pursue a political career, but in order to do much the same sort of work. He was replaced by another very capable youngish person.

But I can tell you that both would agree with me completely when I say this: In the various battles we are in, including the culture wars, we are always wondering where the rest of the body of Christ is. Why do so few engage? Why does it seem like our forces are so few in number?

Why, during the great battles of the day – be it the battle for life or the war over marriage and family – do most believers simply prefer to sit things out? Why do they think they can just sit back and relax while a few brave warriors slog it out in the trenches?

Why, to paraphrase Moses, should your fellow Christians go to war while you just sit there like bumps on a log? Moses even went on to call these recalcitrants “a brood of sinners” (v. 14). John the Baptist said similar things of the Pharisees: “you brood of vipers” (Matthew 3:7), as did Jesus (Matthew 12:34 and 23:33).

These are strong words for those who think they are in line with God but are really only in line with their own selfish purposes. The two tribes put their own self-interest ahead of that of the rest of Israel. This not only breached the unity that the twelve tribes so much needed, but it showed what distorted priorities they had.

How often do believers today put self-interest and love of possession ahead of doing the Lord’s work? How often do Christians sit back and watch a handful of others engage in the various battles taking place all around them? How often do compromised Christians pretend we are living in a time of peace, when open warfare is everywhere upon us?

As Iain Duguid puts it:

The temptation that faced the Reubenites and the Gadites was to settle in a place dictated by their possessions, not by the Lord’s promise…. It was ultimately economics that was driving their request, not theology. In effect they were asking to settle down somewhere other than where God had called them to live because it was more suitable for their lifestyle….
It is the same way with our self-centered affluence. The decision to settle down comfortably to enjoy what we have, without any thought of God’s call on our lives, never simply affects ourselves. It affects our brothers and sisters in the church as well. Each of us has a part to play in setting the spiritual temperature of our own congregations. If I am cool toward God, comfortably satisfied with what I already have, then that coolness will dampen my neighbor’s enthusiasm for God. Equally, if I am on fire for the Lord, passionately pursuing a life of holiness and service, then something of that heat will radiate out to those around me. We never live our lives in a vacuum. Our commitment, or lack of commitment, affects the body as a whole.

Earlier C. H. Spurgeon had put it this way:

Kindred has its obligations. The Reubenites and Gadites would have been unbrotherly if they had claimed the land which had been conquered, and had left the rest of the people to fight for their portions alone. We have received much by means of the efforts and sufferings of the saints in years gone by, and if we do not make some return to the church of Christ by giving her our best energies, we are unworthy to be enrolled in her ranks.
Others are combating the errors of the age manfully, or excavating perishing ones from amid the ruins of the fall, and if we fold our hands in idleness we had need be warned, lest the curse of Meroz fall upon us. The Master of the vineyard says, “Why do you stand here all the day idle?” What is the idler’s excuse? Personal service for Jesus becomes all the more the duty of all because it is cheerfully and abundantly rendered by some.
The toils of devoted missionaries and fervent ministers shame us if we sit still in indolence. Shrinking from trial is the temptation of those who are at ease in Zion: they would try to escape the cross and yet wear the crown; to them the question for this evening’s meditation is very applicable.

And Warren Wiersbe ties it all together with these words:

According to Hebrews 4, claiming the inheritance in the Promised land is an illustration of the different ways believers today relate to the will of God and the inheritance He has for us now in Jesus Christ. Some people are like the older generation who perished in their wandering and never entered the land. Others are like the 10 spies who visited the land, saw its wealth but failed to enter in. The Transjordanic tribes entered the land, but didn’t stay there. They preferred to live on the border and raise their cattle. God wants His people to be like the new generation that trusted God, entered the land, claimed the victory, and enjoyed the blessings.

Every Christian needs to fully enter in. The culture wars are just one obvious area where we can use everyone’s involvement and commitment. But in all aspects of the Christian life, there is no place for those who want to relax on the sidelines.

We all have work to do. We all have gifts given to us by God that need to be utilised. We all have a role to play. We all have a job to do. But far too many Christians are sitting in the premises instead of standing on the promises. It is high time for this to change.

“Should your fellow Israelites go to war while you sit here?”

4 Replies to “Lessons from the Book of Numbers”