The other day I penned a piece about the life and ministry of the great evangelist George Whitefield. It was largely based on the two-volume, 1200-page biography by Arnold Dallimore. There are so many lessons for us today that we can learn from the man, that one article was never going to be sufficient.

So here is my next instalment – and more perhaps may still be forthcoming. But several further major themes based on him and his ministry and the Great Awakening can be offered. Here I present two more vital truths and lessons from the mighty evangelist. 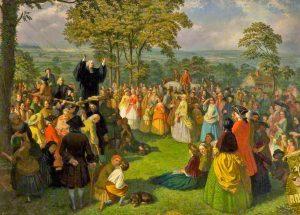 There is no question that one of the reasons for the amazing effectiveness of his ministry was the sort of gospel he proclaimed. He offered a full, biblical gospel, not a man-pleasing gospel. He never shrank back from proclaiming the whole counsel of God.

And that always included a very strong emphasis on the core Christian doctrines: the justice and holiness of God; the devastating nature of sin; the reality of future judgment including the reality of hell; the sole remedy of a crucified Christ; and the utter necessity of new birth.

Consider just one of those emphases: Hellfire preaching was a normal part of his ministry and that of the other revivalists. They were not at all shy about speaking on the wrath of God and judgment to come. Oft heard was the admonition about ‘fleeing the wrath to come’.

And this sort of preaching had the desired effect. Hundreds of thousands were converted in England and the colonies in America. Yet today most Christians think this is not the sort of thing we should even mention in our pulpits. I actually heard one megachurch pastor say these topics may have been OK in the past, but they are not workable today.

Mind-boggling! Does he actually think that he can improve on what Jesus, the disciples, and all the great evangelists and revivalists preached on? So we should tell Jesus he needs to get with the times and go with a feel-good message of acceptance and your best life now?

Whitefield speaks to us about the power of the Gospel. It was not the “social gospel” but the gospel of “redeeming grace” that brought the great change two hundred years ago. In the knowledge of the power of the Gospel Whitefield went with confidence to the semi-heathen Kingswood colliers or the equally godless aristocracy and to all other classes of mankind and witnessed the transformation of lives among all.
The Gospel is the need of this present hour. Not the partial Gospel which characterises so much of today’s evangelicalism, but the whole Gospel that declares the majesty and holiness of God, the utter helplessness of man, the necessity of repentance, and a salvation that is manifested, not in a mere profession, but in the miracle of a new life. May Whitefield’s example bring Christians back to the Gospel in its fullness and therefore its power!

Let me mention just two other things about his gospel preaching. One, it was from a heart broken by God. He loved God and so he loved sinners. As one of his associates put it:

I hardly ever knew him to go through a sermon without weeping, more or less, and I truly believe his tears were the tears of sincerity. His voice often interrupted by his affection; and I have heard him say in the pulpit, “You blame me for weeping, but how can I help it when you will not weep for yourselves, though your immortal souls are on the verge of destruction, and for aught you know, you are hearing your last sermon, and may never more have an opportunity to have Christ offered to you.”

Secondly, Whitefield was never concerned with mere numbers when he preached. He was interested in real disciples. So he never counted “converts” but instead insisted on real signs of the new birth. Says Dallimore, “He chose to wait until conversion had been manifested by months of a transformed life, and his attitude is well expressed in his words, ‘Only the judgment morning will reveal who the converts really are’.”

Whitefield did exercise an effective leadership of this movement. It was not, however, a leadership by domination and the giving of commands; rather it was one of affection and example. Most of the exhorters had been converted under his ministry and looked on him, as many of them stated, as a spiritual father. In turn, holding him in such high esteem and seeing in him an embodiment of so much of their own Christian ideal, they delighted to be his co-laborers and to co-operate with his plans. Whitefield was inflexible in matters of moral rectitude and expected the men to maintain a life of strong Christian discipline and tremendous activity, but in general his relationship with the people and exhorters throughout his movement was by his heart-felt concern, his unfailing encouragement, and his personal example.

No one reading about the life of Whitefield can fail to notice how doggedly relentless and dedicated he was. He never seemed to slow down. He never seemed to allow himself any of the luxuries and pleasures of life. His sole purpose in life was to share the glories of Christ and to win souls.

He was daily up at 4am and went to bed at 10pm, but because of his amazingly busy ministry, it was often midnight and beyond before he could retire. He preached countless sermons, sometimes two hours in length. Henry Venn said he probably spent 40 to 60 hours a week at this labour.

In addition to preaching he was constantly counselling people and dealing with their spiritual questions and problems. As he said, “I sleep and eat but little, and am constantly employed from morning till midnight.” As one person said of his life: “Whitefield’s career permitted him hardly a day of what would be called repose, till he found it in the grave at the age of fifty-six.”

Already back in 1748 he was doing so much outdoor preaching and the like that he developed pain in breathing that would afflict him until he died in 1770. Quite often after he preached to an especially large crowd, he would afterward vomit a “large quantity of blood”.

His boundless love for God and his passion for souls meant he could never rest. He always felt the need to reach out to the lost. As he lay on his deathbed one of his associates greatly concerned about his deteriorating health said that he wished he would not preach so often. Whitefield famously replied, “I would rather wear out than rust out.”

Of course most Christians today would rightly say there is indeed a place for regular rest, for breaks, and for a downtime from ministry, simply to keep our bodies in shape as temples of the Holy Spirit. So I am not saying we all should copy Whitefield in his tireless and non-stop ministry.

His incredibly busy life more than likely contributed to his perhaps premature death. But we can all emulate and learn from his total commitment to Christ, his undying passion for souls, and his determination to see God glorified in everything he did.

Says Dallimore: “The burning desire to reach the hosts of mankind with the message of saving grace overruled all trials that came in the way, and he testified to the Divine assistance he experienced in learning the task, and the joy that was his as he performed it.”

There are many other items I could mention here. But more articles will be needed for that. So let me close by encouraging you to learn about this amazing man and his amazing ministry. There are various books out there about his life.

For those who simply cannot countenance the prospect of a 1200-page read – and some Christians struggle with finding ten minutes a day to read God’s Word! – there is some relief. In 1990 Dallimore did a 200-page abridgement of his 2-volume work, which, while nowhere near as full and detailed – sort of like reading an abridged version of The Lord of the Rings – still offers a helpful overview of the man and his ministry.

Why not grab a copy and be inspired and blessed? Happy reading.

3 Replies to “More Lessons From the Life of Whitefield”