Many folks, if asked to name a religious figure who opposed Hitler and the Nazis, would be able to name Dietrich Bonhoeffer. The Lutheran pastor was indeed a leading figure in the German Christian community who resolutely opposed this diabolical political ideology.

But there is another name we should be aware of, a German Catholic philosopher and theologian who spent much of his adult life warning about the dangers of Nazism – and communism. I refer to Dietrich von Hildebrand. Born in Italy in 1889, he later moved to Germany to study philosophy, eventually teaching it from 1919. 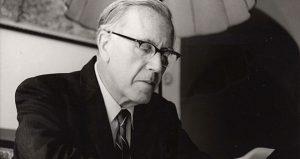 During this period he converted to Catholicism from his nominal Protestant upbringing. Already by 1921 he could see the great evils of Nazism, when most others did not or would not see it. He constantly warned against it, and was forced to flee Germany for Vienna in 1933.

He also had to flee Austria in 1938, eventually becoming part of the French resistance in 1940, and then ending up in America in the same year. The author of several dozen books, he retired from teaching in 1960 and died in 1977. He is important for many reasons, but his opposition to the Nazis is my main focus here.

An important book released a few years ago contains much of his writings on all this. In My Battle Against Hitler (Image, 2014) we have 250 pages of his memoirs from 1921 to 1938, and the last 75 pages contain 14 key articles he penned on Christian resistance to Hitler.

Here I will draw upon two of them, both from 1935: “The Danger of Becoming Morally Blunted,” and “The Danger of Quietism”. As will be seen, these two vital but brief essays are so very relevant to believers today. We too have demonic ideologies we are warring against, and we too must retain our moral concern and not abandon our political responsibilities.

I will here quote portions from each of these pieces. Let me say that if some folks have any sectarian concerns, simply replace the word “Catholic” with “Christian” – the exact same meanings still come across. So let me begin with the first essay.

Here he notes that many folks who at first were rightly outraged by Hitler and the Nazis eventually just got used to them, and lost their moral concerns. Von Hildebrand warned against becoming accustomed to evil and losing one’s moral sensitivity. He writes concerning the situation in Germany:

If a state slowly descends— in its official statements, in its legislation, and in its day-to-day conduct of affairs— ever more deeply into immorality and barbarism, then there is a tremendous risk that the populace will gradually become accustomed to its ethical level, that their initial indignation will subside, and that they will imperceptibly lower their own ethical criteria when they see that all the crimes committed by the state go unpunished as it continues to exist with the dignity of its own inherent authority and the formal recognition of other states.
At the time, the laws passed by the National Socialist regime in the year 1933 provoked great indignation everywhere in the world. Since then, however, so many even more terrible things have happened that the events of 1933 no longer make much of an impression on most people. They have gotten used to the Third Reich by means of an imperceptible process of acclimatization that has led to its increasing acceptance. Their own moral sensitivity has suffered harm. The Third Reich is fortunate there is no effective judicial decree that identifies and condemns the kind of spirit that motivates it (although such judgments are often applied to the private murderer and criminal), and this lack allows the force of habit to have its full effect, even with regard to moral issues. How accustomed the world has become to the rivers of blood, the countless instances of oppression, and the flood of the most terrible injustices perpetrated by Bolshevism! People generally remain indignant only for a short while. After a certain time, a person tends to become weary of disapprobation, even if the deed that occasioned his revulsion goes unpunished and the sin continues to cry to heaven….

He reminds us that vengeance belongs to God, and believers

must never succumb to any embittered attitude of hatred. We must always retain a profound compassion for those who have gone astray, and we cannot allow ourselves to be poisoned by our indignation. Yet we must remain alert. Our indignation and profound sorrow over the fact that a state officially proclaims, propagates, and puts into effect things that make a mockery not only of God’s commandments, but of the most elementary principles of humanity, must not be permitted to abate. There are some monstrosities we must never forget, much less accept…

In his other essay he speaks about how so many German Christians felt they must pull out of any engagement in the political arena and just concentrate on inner, personal spirituality. They saw no need to let their faith shine in the public arena.

He begins by saying that yes, we must not overly politicise our faith and ignore evangelism and our own spiritual duties to our soul, but the other extreme is equally unbiblical and harmful. He writes:

But it is utterly impossible to expect Catholics to be indifferent to politics at a time when the debates in the political sphere concern not just political issues but, as our martyred Chancellor Dollfuss once stated, fundamental beliefs about the meaning of existence.
When today the Antichrist is rearing his head in Bolshevism and National Socialism, when Christ is persecuted with unprecedented hatred, and a revolt is raging not only against the sphere of the supernatural but even the person in general, all Catholics must fight for Christ in the political sphere with full personal commitment, representing in season and out of season the claims of the kingdom of God and thus, implicitly, those of morality and the natural law….
In a time when the state expressly advances totalitarian claims and incessantly seeks to overstep its divinely ordained sphere of competence, indifference to the political sphere on the part of Catholics constitutes an outright dereliction of duty.

He goes on to once again offer biblical balance here. He reminds us that our own personal transformation in Christ is of course paramount, and we must reject all forms of earthly messianism. “Nevertheless, he makes use of all legitimate earthly means in order to shape the political community in such a way that the kingdom of Christ may be built up within it.”

Bolshevism and National Socialism are primarily worldviews. They neither are, nor wish to be, mere political systems. Apathy toward the political sphere on the part of Catholics easily leads, therefore, to apathy toward National Socialism as a whole. Many say, “Why should we always simply attack and criticize? Let us depart from the political sphere; let us search out and convert those who have gone astray. Let us, who stand aloof from politics, spread the spirit of love and reconciliation.”

Hmm, how often have I heard all this before? These objections and criticisms are constantly being offered today. When I try to stir up fellow believers to fight for religious freedom or the unborn or the institution of marriage, they offer the same cop outs and cheap excuses.

Indeed, the parallels between what von Hildebrand had to deal with and what we also deal with today are numerous. While Communism is still a threat (and von Hildebrand often spoke against it), Nazism no longer is. But plenty of dangerous ideologies and worldviews must be resisted today, be they secular humanism, cultural Marxism, political Islam, or the various groups warring against family, faith and life.

And of course the need for us to retain our moral sharpness and not just grow accustomed to evil is still so very vital. We must never grow used to the horrors of abortion or the war against marriage and family for example. We need to retain a sharp sense of moral outrage at injustice and evil, wherever they are found.

The stirring words of von Hildebrand are so very relevant for Christians in the West in 2018. We too can lose our moral edge and get used to evil. We too can just seek to opt out of the most important battles of our day. Both these moves are wrong.

Let us learn the lessons from the past. Let us reject the advice of the compromisers and the cowards. Let us eschew calloused consciences and unbiblical quietism. As von Hildebrand goes on to say:

This is, at bottom, a cowardly flight from the battle to which God is calling us. It is our obligation as soldiers of Christ to wage war against the Antichrist and to rip the mask from his face. The “apolitical” disposition cultivated by certain Catholics, which induces others to refrain from exposing and relentlessly fighting against National Socialism, is an evil sophism…
The soldier of Christ is obligated to fight against sin and error. His battle against the Antichrist is prompted by his love for Christ, and for the salvation of souls. He fights this battle for the salvation of those who have gone astray. His attitude is one of true love. But those who flee from the inevitable battle and treat irenically those who have gone astray, obfuscating their error and playing down their revolt against God are, fundamentally, victims of egoism and complacency.

8 Replies to “Von Hildebrand and Christian Moral and Political Engagement”