In these historical books we learn about how the monarchy in Israel was established. Samuel first anointed Saul as king, and then David. Four main characters are featured in these two books, and a rough outline of the book, at least in terms of these major personalities, is as follows: 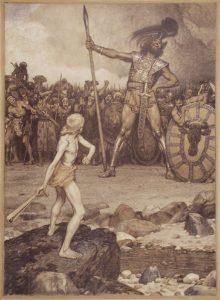 As far as a rough timeline goes, David Pawson offers this helpful but broad-brush four-fold scheme of Israel’s history from the time of Abraham to the time of Christ:

4. In the 500 years leading up to the time of Christ they were led by priests: Joshua through to Annas and Caiaphas.

One important issue that arises in these books concerns the issue of kingship, and whether Israel was in fact meant to be ruled by human kings. On this topic there is some uncertainty amongst Christians about all this, and there may well be some ambiguity in Scripture itself.

That is, was it merely a human idea – and therefore a wrong idea – to have an earthly king, or was it actually God’s idea? One needs to take all of the biblical data into account on this to make a proper assessment, and that I have attempted to do in this earlier article: billmuehlenberg.com/2016/03/20/ancient-israel-meant-king/

I concluded that article with these words:

The idea of kingship was not wrong per se, but the choice of Saul was. As Daniel Block points out, “Saul’s rule was doomed from the beginning. Ultimately he served as a foil for the one Yahweh had in mind from the beginning, the man after Yahweh’s heart (1 Sam. 13:14).”

So we see some ambivalence here in Scripture on this issue. The choice of Saul was displeasing to Samuel and to God, and it led to trouble big time. But the idea of a human king in right relationship to the heavenly king was not out of line, as David was to later demonstrate.

This was certainly true of the one true King, even as he entered the world in a cradle in a manger.

Henrietta Mears puts it this way:

We must not only crown Christ as King of our life, but we must set Him on His rightful throne. The book of 1 Samuel records the failure of man’s king, Saul. Second Samuel describes the enthronement of God’s king, David, and the establishment of the “House of David” through which the Messiah, Jesus Christ, should later come. When Christ comes again, He will sit upon the throne of David (Isaiah 9:7; Luke 1:32).

In addition to this issue, in my series on difficult Bible passages I have penned two pieces on the books of Samuel. One is on 1 Samuel 16:14 which deals with the issue of an evil spirit tormenting Saul: billmuehlenberg.com/2014/03/24/difficult-bible-passages-1-samuel-1614/

The other deals with Saul and the witch of Endor as found in 1 Samuel 28: billmuehlenberg.com/2014/04/03/difficult-bible-passages-1-samuel-28/

Those are certainly not the only difficult or hard to understand passages in these two books, and more articles may be forthcoming on other such texts. As to highlights of the books, there would be a number to choose from. One of the really great passages is that of 2 Samuel 7.

I discussed this in more detail here: billmuehlenberg.com/2008/11/24/getting-our-priorities-right/

As I said in the article:

After David had been made king and had enjoyed rest from all his enemies, he himself had a nice house to live in, as we read in 2 Samuel 7. But he was greatly concerned that God did not have a house for himself. The ark of God remained in a tent while David was in a nice cedar house.

So he tells Nathan the prophet that he wants to build a house for God. Unlike the Hebrews some 450 years later [as recorded in the book of Haggai], David had the right priorities. His heart was not on himself and self-aggrandisement, but on the Lord and his glory. But God spoke to David through Nathan and made a counter-offer – a mind boggling, amazing reversal of David’s intentions.

So as always, we can learn plenty of spiritual lessons and truths from these historical books about Israel’s history. In this case we learn about the importance of getting our priorities right as believers, and putting God first in all that we do.

And as a follow-up to this, let me offer here some of my favourite passages from these books. Any one of them can greatly bless, encourage or challenge Christians today, and they all can be turned into terrific sermons as well:

1 Samuel 2:30 Those who honor me I will honor, but those who despise me will be disdained.

1 Samuel 3:1 In those days the word of the Lord was rare.

1 Samuel 10:26 And Saul also went home to Gibeah; and there went with him a band of men, whose hearts God had touched. (KJV)

1 Samuel 14:6 Jonathan said to his young armor-bearer, “Come, let’s go over to the outpost of those uncircumcised men. Perhaps the Lord will act in our behalf. Nothing can hinder the Lord from saving, whether by many or by few.”

1 Samuel 15:22 But Samuel replied: “Does the LORD delight in burnt offerings and sacrifices as much as in obeying the voice of the LORD? To obey is better than sacrifice, and to heed is better than the fat of rams.”

1 Samuel 18:14 In everything he did he had great success, because the LORD was with him.

2 Samuel 10:12 Be strong, and let us fight bravely for our people and the cities of our God.

2 Samuel 15:21 But Ittai replied to the king, “As surely as the Lord lives, and as my lord the king lives, wherever my lord the king may be, whether it means life or death, there will your servant be.”

2 Samuel 24:24 But the king replied to Araunah, “No, I insist on paying you for it. I will not sacrifice to the Lord my God burnt offerings that cost me nothing.”

As is usually the case, the commentaries I offer in these articles have a few defining features: 1) they are overwhelmingly ones I happen to own and thus know something about, and 2) they mainly represent a more or less conservative and/or evangelical point of view.

And for those wanting less technical, scholarly and academic treatments, there are always plenty of devotional and expository commentaries available (some of which can also be scholarly however!). See these four volumes for starters: