Amy Wilson Carmichael was an Irish missionary in India, who opened an orphanage and founded a mission in Dohnavur. She served in India for 55 years without furlough. She wrote many books about the missionary work there, as well as many devotional classics.

She was born into a Presbyterian home in Ireland in 1867. She became a Christian at age 18, and soon sensed a call to become an overseas missionary. Inspired by the work of Hudson Taylor she applied to be a missionary in China, but was turned down for health reasons.

She then felt that Japan was the way forward, and arrived there in April 1893. Like Taylor she donned native apparel and sought to learn the language, but ill health meant she stayed there only 15 months. While there she determined that she could best serve the Lord by remaining single. 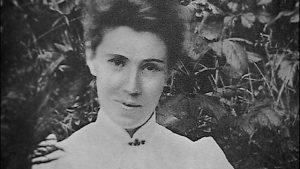 Amy then accepted a role with a Church of England mission in India. She left on October 11, 1885, and never returned home. So devoted was she to the work that she would spend the rest of her life there. She took no vacations and had no furloughs. She spent the last 55 years of her life serving in India.

At first she did evangelistic work with the Walkers, a missionary couple, but soon settled in Dohnavur in India’s south for a new work that would occupy her till her death. There in 1901 she met quite young Indian girls who were effectively being enslaved in sexual trafficking via the Hindu temples.

These children were mainly young girls who were dedicated to the gods, and usually forced into temple prostitution to earn money for the priests. Carmichael founded the Dohnavur Fellowship that same year, and helped many hundreds of young girls – and boys – as she sought to rescue them from this evil system of sexual enslavement.

Often parents would sell their daughters – even as babies – to the temples, where they then belonged for life. Those who tried to escape were treated severely, often tortured. By 1904 Amy had 17 children in her care, 6 of them temple children.

Those numbers soon mushroomed into the hundreds, as so many young children became part of a new, loving and caring family. Other Christian helpers were needed for this massive ministry and many soon joined the work. Love, prayer, and care of all kinds – including education and health care – were hallmarks of the ministry.

But persecution and opposition were relentless. Thus personal love and care were supplemented by public activism. For example, Thomas Walker often appeared on behalf of the temple girls in court cases, seeking their release from the horrific conditions they were living in. And in her numerous books Amy sought to let the whole world know about the evils of this temple prostitution.

In 1931, she was severely injured in a fall and would basically remain bedridden for the next two decades. Her work continued, but in a somewhat different form. Even though she was often in relentless pain, she still ran the work, still loved the girls and boys, and still continued writing.

Carmichael died in early 1951 at the age of 83. She asked that no stone be put over her grave at Dohnavur. Instead, the children she had cared for put a bird bath over it with the single inscription “Amma”, which means mother in the Tamil language.

Carmichael the writer, and her legacy

All up Amy wrote 35 books, 13 of them after her accident. The first 22 related to the Dohnavur work and were for the most part missionary biographies. Her latter writings included books on various Christian topics, including, not surprisingly, on the subject of suffering and infirmity. Books such as Rose from Brier (1933) and Gold by Moonlight (1935) especially are worth reading in this regard.

She has left an enduring legacy, not only through her mission at Dohnavur (the work continues to this day, although the dedication of girls to temples is now illegal), but her books have inspired millions of people worldwide. As but one example, consider another mighty woman of God who also knew all about suffering: Elisabeth Elliot.

Although she never met Amy, she left a lasting impression on Elliot. She even wrote a biography about her in 1987. In it she said this:

I “met” her when I was fourteen. Mrs. P.W. Du Bose, headmistress of a small boarding school in Florida, used to quote often in school vespers from Carmichael books. I was captivated and told her so. She lent me her books. Dohnavur became a familiar place. I knew its bungalows, its paths, its people; I breathed its air. Amy Carmichael became for me what some now call a role model. She was far more than that. She was my spiritual mother. She showed me the shape of godliness.

Elliot says this about Amy the writer: “No matter how crowded her days and nights, how many demands were made on her time, how impossible privacy or time for reflection might seem to be, Amy Carmichael managed to write. It was necessity laid upon her.”

And her books reveal the love of God that so marked her whole life. Frank Houghton says this of her in the introduction to his biography:

In Japan for a brief while, and then for a lifetime in India, the glow of God’s great love shone forth through her whole being. Ask her “children,” ask the members of the Fellowship, what most impressed them about Amma, and the reply never varies: “It was her love.”

There is plenty to choose from in her many writings. Here are just a few representative quotes to encourage you to read further about her, and from her:

“Satan is so much more in earnest than we are – he buys up the opportunity while we are wondering how much it will cost.”

“We profess to be strangers and pilgrims, seeking after a country of our own, yet we settle down in the most un-stranger-like fashion, exactly as if we were quite at home and meant to stay as long as we could. I don’t wonder apostolic miracles have died. Apostolic living certainly has.”

“All along, let us remember we are not asked to understand, but simply to obey…”

“Can we follow the Savior far,
who have no wound or scar?”

“You can give without loving, but you cannot love without giving.”

“He said ‘Love…as I have loved you.’ We cannot love too much.”

“There have been times of late when I have had to hold on to one text with all my might: ‘It is required in stewards that a man may be found faithful.’ Praise God, it does not say ‘successful’.”

“God hold us to that which drew us first, when the Cross was the attraction, and we wanted nothing else.”

Of course many memorable quotes come from her now classic yet brief 1938 volume If. Here are a few quotes from the book:

“If I am content to heal a hurt slightly, saying ‘Peace, peace,’ where is no peace; if I forget the poignant word ‘Let love be without dissimulation’ and blunt the edge of truth, speaking not right things but smooth things, then I know nothing of Calvary love.”

“If by doing some work which the undiscerning consider ‘not spiritual work’ I can best help others, and I inwardly rebel, thinking it is the spiritual for which I crave, when in truth it is the interesting and exciting, then I know nothing of Calvary love.”

“If I am afraid to speak the truth lest I lose affection, or lest the one concerned should say, ‘You do not understand’, or because I fear to lose my reputation for kindness; if I put my own good name before the other’s highest good, then I know nothing of Calvary love.”

“If I take offense easily; if I am content to continue in a cool unfriendliness, though friendship be possible, then I know nothing of Calvary love.”

“If I become entangled in any ‘inordinate affection’; if things or places or people hold me back from obedience to my Lord, then I know nothing of Calvary love.”

A week ago I discovered to my horror that I had no books in my library by or about Amy Carmichael. Needless to say I quickly and decisively remedied that, grabbing whatever I could find at various local Christian bookstores.

There are of course many of her own books which tell her story, as well as a number of good biographies now available. Here are some of them. Many of them are largely based on the helpful biography penned by Houghton.