There is perhaps no greater need today in the West than for people to be able to distinguish right from wrong. Most folks have altogether lost their moral compasses and are simply roaming aimlessly in an ethical no-man’s land. Moral absolutes have been jettisoned and relativism reigns.

This is always a recipe for disaster. And we have seen it occurring throughout human history. There has always been a connection between the abandonment of morality and the abandonment of God. When we declare the nonexistence or the inconsequentiality of God, we lose the basis for moral absolutes.

In his 2005 book Unspeakable, Os Guinness describes our modern world without God: “What was once unimaginable becomes thinkable and then fashionable. What used to be abnormal is now normal. Where we were shocked, we are now indifferent. What started as soft-core ends as hard-core.”

Here he is simply repeating the wisdom of the prophet Isaiah. Two and a half millennia ago he offered this sombre warning: “Woe to those who call evil good and good evil, who put darkness for light and light for darkness, who put bitter for sweet and sweet for bitter” (Isaiah 5:20). 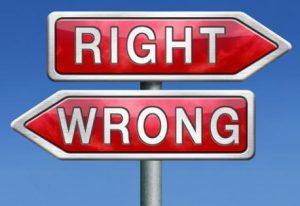 Most of the great thinkers since that time have made the connection between God, moral absolutes, and the state of a nation. Numerous quotes could be offered here. Plato for example knew that some objective basis of morality was needed.

He wrote: “Any system of morality which is based on relative emotional values is a mere illusion, a thoroughly vulgar conception which has nothing sound in it and nothing true.” The classical philosophers spoke of the importance of cultivating virtue, both private and public. As Aristotle said, “Happiness does not consist in pastimes and amusements but in virtuous activities.”

Sir Francis Bacon made this declaration: “All good moral philosophy is … but the handmaid to religion.” And John Locke said this: “To give a man full knowledge of morality, I would send him to no other book than the New Testament.”

The Irish political theorist and philosopher Edmund Burke put it this way: “Manners [morals] are more important than laws. Upon them, in great measure, the laws depend.” President George Washington said it this way: “Of all the dispositions and habits which lead to political prosperity, religion and morality are indispensable supports.”

President John Quincy Adams concurred: “There are three points of doctrine the belief of which forms the foundation of all morality. The first is the existence of God; the second is the immortality of the human soul; and the third is a future state of rewards and punishments.”

In 1835 Alexis de Tocqueville made this observation: “Not until I went into the churches of America and heard her pulpits flame with righteousness did I understand the secret of her genius and power. America is great because America is good, and if America ever ceases to be good, America will cease to be great.”

C.S. Lewis said this: “There is no escape… If we are to continue to make moral judgments (and whatever we say we shall in fact continue) then we must believe that the conscience of man is not a product of Nature. It can be valid only if it is an offshoot of some absolute moral wisdom, a moral wisdom which exists absolutely “on its own” and is not a product of non-moral, non-rational Nature.”

The great scientist Albert Einstein got it right when he said:

Science has provided the possibility of liberation for human beings from hard labor, but science itself is not a liberator. It creates means not goals. Man should use [science] for reasonable goals. When the ideals of humanity are war and conquest, those tools become as dangerous as a razor in the hands of a child of three. We must not condemn man’s inventiveness and patient conquest of the forces of nature because they are being used wrongly and disobediently now. The fate of humanity is entirely dependent upon its moral development.

Such quotes could be repeated at length. The wisdom of the ages needs to be applied to the modern dilemmas we now find ourselves in. Everyday individuals and high-powered leaders both need to get back to morality, which means getting back to God.

The reason I have all this on my mind of late has to do with what I read in my daily Bible reading. This morning the familiar words of Solomon struck me with renewed force. Israel’s King David had died and Solomon was newly established on the throne (1 Kings 1).

In 1 Kings 2 we read about him subduing his enemies and securing his kingdom. God then appears to him in a dream and asks him what he would like. Most of you would know how the story goes. Instead of wealth or power or other selfish things, he asked for wisdom so that he might rule his people rightly.

At Gibeon the Lord appeared to Solomon during the night in a dream, and God said, “Ask for whatever you want me to give you.” Solomon answered, “You have shown great kindness to your servant, my father David, because he was faithful to you and righteous and upright in heart. You have continued this great kindness to him and have given him a son to sit on his throne this very day.

“Now, Lord my God, you have made your servant king in place of my father David. But I am only a little child and do not know how to carry out my duties. Your servant is here among the people you have chosen, a great people, too numerous to count or number. So give your servant a discerning heart to govern your people and to distinguish between right and wrong. For who is able to govern this great people of yours?” The Lord was pleased that Solomon had asked for this.

God did indeed answer this request, and in the very next chapter we encounter the very familiar story of his wisdom being applied to the case of two women and a baby they were fighting over. In 3:28 we read about the outcome of his ruling: “When all Israel heard the verdict the king had given, they held the king in awe, because they saw that he had wisdom from God to administer justice.”

And at the end of chapter four we read more about how Solomon’s wisdom became known even to the surrounding nations. As we find in verse 34: “From all nations people came to listen to Solomon’s wisdom, sent by all the kings of the world, who had heard of his wisdom.”

Wow, we sure can use that sort of wisdom today. We sure need this sort of moral discernment that can distinguish between good and bad, right and wrong. That is in such short supply today. We all need it, and our political leaders certainly need it as well.

But very few seem to have it. Part of the way to get back to greatness as a people and as a nation is to have the ability to tell the difference between truth and error, between what is right and what is wrong. Would that more people – and more leaders – make the sort of prayer that Solomon did.

We sure need it bad right now.

6 Replies to “On Moral Absolutes and Discerning Right from Wrong”