There happened to be a documentary on Elvis Presley last night on TV which I watched a good part of. I assume there are plenty of such docos out there on “The King”. This one came out last year and was called “The Seven Ages of Elvis”. I found it fascinating to see how much influence he still has.

He of course died back in 1977 at the age of 42. But he lives on for millions of fans. Indeed, the doco stated that the dead Elvis has become an even bigger phenomenon than the living Elvis, ‘worth more annually than Michael Jackson, Frank Sinatra and David Bowie combined’. 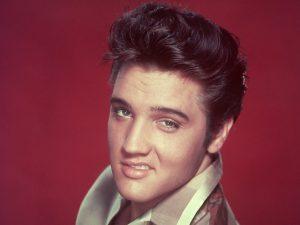 His home, Graceland, is treated like a religious shrine with non-stop visitors. Each year on August 16 there is a candlelight vigil there to mark the anniversary of his passing, with tens of thousands of adoring and emotional fans showing up. It is a secular pilgrimage for people the world over which certainly takes on religious overtones.

Moreover, it is estimated that more than one billion Elvis Presley records have been sold worldwide, more than that of any other artist. And there are the tens of thousands of Elvis imitators, and so on. Then there are those who believe he is still alive…

What is it about the man that has such a hold on so many people? It is clear that Elvis and his music has brought great joy to countless fans, both when he first made a name for himself back in the mid-50s, and still – and apparently even more so – right up to today.

One way to answer such a question is to take a look at another man who has also influenced millions of people, but certainly not in the same way and not to the same extent. Sure, his home outside of Oxford is still visited by some fans. My wife and I did this for example several years ago. But even he is not treated as royalty as Elvis is.

I refer to the great Christian writer and apologist C. S. Lewis. My aim here is not to compare the success and impact of the two men – although that could make for an interesting piece. But I want to discuss a concept Lewis wrote often about, the reality of joy as an earthly tease and foretaste to an eternal reality.

In his important 1955 volume, Surprised by Joy, he recounts his conversion story which had occurred some 24 years earlier. In it he speaks about how throughout his life he had snippets of joy: longings, feelings and experiences which pointed to something greater and more durable elsewhere.

He became restless trying to gain this illusive happiness and joy which he could only get glimpses of, and only have fleeting experiences of in this life. Let me offer a few quotes from the book. Early on Lewis speaks of three experiences he had as a youth that gave him such a strong sense of desire or longing. He writes:

The first is itself the memory of a memory. As I stood beside a flowering currant bush on a summer day there suddenly arose in me without warning, and as if from a depth not of years but of centuries, the memory of that earlier morning at the Old House when my brother had brought his toy garden into the nursery. It is difficult to find words strong enough for the sensation which came over me; Milton’s “enormous bliss” of Eden (giving the full, ancient meaning to ‘enormous’) comes somewhere near it. It was a sensation, of course, of desire; but desire for what?…

The reader who finds these three episodes of no interest need read this book no further, for in a sense the central story of my life is about nothing else. For those who are still disposed to proceed I will only underline the quality common to the three experiences; it is that of an unsatisfied desire which is itself more desirable than any other satisfaction. I call it Joy, which is here a technical term and must be sharply distinguished both from Happiness and from Pleasure. Joy (in my sense) has indeed one characteristic, and one only, in common with them; the fact that anyone who has experienced it will want it again…

I doubt whether anyone who has tasted it would ever, if both were in his power, exchange it for all the pleasures in the world. But then Joy is never in our power and Pleasure often is.

A briefer version goes like this: “All Joy reminds. It is never a possession, always a desire for something longer ago or further away or still ‘about to be’.” Or as he wrote in a letter: “All joy (as distinct from mere pleasure, still more amusement) emphasizes our pilgrim status; always reminds, beckons, awakens desire. Our best havings are wantings.”

And since we are talking about Elvis and his music, let me offer a remark that Lewis made about music:

As to…old composers like Schubert or Beethoven, I imagine that, while modern music expresses both feeling, thought and imagination, they expressed pure feeling. And you know all day sitting at work, eating, walking, etc., you have hundreds of feelings that can’t be put into words. And that is why I think that in a sense music is the highest of the arts, because it really begins where the others leave off.

So things like music and other types of art, beautiful sunsets, or views of some majestic mountains, can all trigger within us a longing and hunger and desire for eternal beauty and everlasting joy. We get the snippets in this life of what God and eternity are all about. These are pointers and indicators of something more, something greater, something eternal.

I have written much more about all this in an article penned a few years ago: billmuehlenberg.com/2014/01/30/c-s-lewis-on-real-happiness-and-real-christianity/

Getting back to Elvis and his music: even though his earlier rockabilly music may not be the music of the angels, the emotional joy that one can get by a man like Elvis and the way it moves us may also be small pointers to a greater, better reality.

And I think music certainly is important to God. I believe that we can say with some assurance that music will be found in heaven. Given how important singing, songs and music are in both Testaments, I am sure some sort of music will be found in the next life. Sure, God will be the ultimate object of all such music, but it will be music nonetheless.

Whether we will be singing “Heartbreak Hotel” in heaven is another matter, but whatever joys and happiness we have obtained from music in this life, it will be elevated and taken to the max in the next – at least in a pure and unadulterated form. Indeed, every good gift that we have enjoyed in this life will be so greatly magnified and enhanced in the next.

So if you love great works of music or art or literature, I do not think there is any reason to believe all this will disappear in the next life. Divine creativity which has inspired so many humans will continue in the afterlife I believe. God is a creative God, and we will enjoy creativity far more in the next world than in this one.

Let me close with one more item – a more sombre item. Will we see Elvis in heaven? Only God knows for sure. He of course recorded some gospel songs and albums. He had a sort of Christian faith at times. But whether he had a life-changing encounter with the risen Christ is a moot point. Only God can judge the human heart and know the human soul.

But for what it is worth, let me quote from just one person who has a view on this. Whether he is right or wrong I do not know. He said this:

Did you know that he loved Gospel music and held the message of Jesus close to his heart? How do I know this? Well, there was that time that he told his best friend, when close to death, that the only thing worthy of our time here on earth is that we follow Jesus. And when fans spread a massive banner that announced his status irrefutably as ‘Elvis is King’ – he paused a song he was singing, looked deep into the room, and with that charming smirk on his face, said ‘there’s only one king honey, and he is Jesus Christ’.
www.premiergospel.org.uk/Blog/Was-Elvis-a-Christian

But it is not my purpose here to get into a war over whether or not he was a genuine follower of Jesus Christ. My point is simply to look at one man and his influence, and get us all to think about the things that really matter in life. That is the real issue we need to contemplate here.

Elvis brought great joy to millions of people. Some of it was a purer sort of joy, and much of it may have been a carnal and fleshly sort of joy. But the fact that so many are still so devoted to him and his music means they may be looking for the right things but in the wrong places.

Jesus Christ alone can ultimately fully satisfy and bring us the joy we so much desire. We can enjoy much that we find in this life – it is part of God’s common grace to us all. But that which we are all really looking for can only be found in the true King.

7 Replies to “Elvis, Lewis and Eternity”