Oh look, a guy pretending to be a girl almost whooped all the female competition at the Commonwealth Games at the Gold Coast. But thankfully an injury has forced him to withdraw. The only thing worse than this outrage are all the brainless twits in the media calling this guy a ‘she’ and referring to him as a ‘her’.

The New Zealand athlete, Gavin Hubbard, who now pretends he is a she, and calls himself Laurel Hubbard, was to have competed today in a weightlifting event. But an elbow injury has meant he was forced to withdraw from competing. And that is a good thing too. 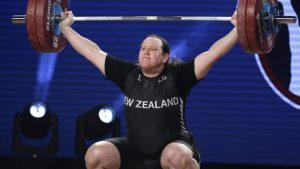 The bulky guy would have easily beaten all the real women in the competition, illustrating what an utter farce the trans con game is, and what numbats our sporting officials are. That they even allowed him to compete as a woman in the first place shows what PC goofballs they are.

As to the recent injury, one write-up explains the state of play (pardon the moonbat references to him as a her):

Transgender weightlifter Laurel Hubbard has withdrawn from her event due to an elbow injury. Earlier a Commonwealth Games boss said the discourse surrounding New Zealand weightlifter Hubbard is clearly an issue the sport needs to deal with. The 40-year-old transgender athlete was set to compete in the women’s 90kg-plus category on Monday but was injured while attempting a Commonwealth Games record lift.
She lifted 120kg but injured her elbow after attempting 132kg with her third effort. Having set New Zealand junior records as a male before her transition, Hubbard’s inclusion on the Gold Coast has led to claims from opponents that she holds an unfair advantage.
Australia’s weightlifting association tried unsuccessfully to have her selection overturned while on Sunday Samoan head coach Jerry Wallwork said he remains firmly opposed to Hubbard competing.
Despite criticism from the Samoan coach, Commonwealth Games CEO David Grevemberg says Laurel Hubbard is eligible for the competition on the Gold Coast. “A man is a man and a woman is a woman and I know a lot of changes have gone through but in the past Laurel Hubbard used to be a male champion weightlifter,” Wallwork said.

An earlier media report noted that there is indeed some controversy about his entry into the women’s sport:

New Zealand’s first transgender athlete at the Commonwealth Games is expected to take gold in the women’s 90kg-plus weightlifting category on Monday at Carrara Sports Arena 1 where she will take on Aussie Deb Lovely-Acason.
Games officials have repeatedly declared their support for Hubbard’s inclusion in the event, despite the 40-year-old having previously competed internationally on the men’s weightlifting circuit under the name Gavin Hubbard.
Hubbard reportedly made her transition to become a woman at the age of 35 and she has satisfied every criteria under Commonwealth Games rules to qualify for the women’s lifting event.
However, she has been the target of widespread protests and uproar from rival weightlifting federations which have publicly called on officials to ban her from competing. Australian Weightlifting Federation chief executive Michael Keelan last month called on the International Olympic Committee (IOC) and the Commonwealth Games Federation to rewrite the rule book that has allowed Hubbard to compete on the Gold Coast.
Australia and several rival federations have claimed Hubbard has an unfair advantage, having transitioned to a woman just five years ago. She became eligible to compete as a woman after showing testosterone levels below the threshold required by the International Olympic Committee.
Hubbard won two silvers at the world championships in Anaheim in December, becoming New Zealand’s first medallist at the competition. Her expected success and potential to inspire has led to a push in New Zealand for Hubbard to be given the honour of carrying the Kiwi flag and lead the team into the stadium during the Games’ closing ceremony.

Um, folks, he is a he! Stop the fantasyland madness please. Simply growing your hair and wearing a dress does not magically make a guy a female. It does indicate some emotional and mental problems that need to be dealt with however.

As commentator David Kupelian has put it:

Unfortunately, sooner or later, there is always a very big price to pay when a society willfully denies reality. The LGBT movement has not only succeeded in mainstreaming behaviors all previous generations considered pathological and immoral; it also insists that the rest of society not only accept these behaviors, but affirm and celebrate them – or be punished….
Is it not madness to think we can transform a man into a woman by surgically fiddling with his plumbing and feeding him hormones – when every single one of his body’s 37.2 trillion cells is permanently coded “male” with Y chromosomes? Paul R. McHugh, Johns Hopkins Hospital’s former top psychiatrist, affirms it simply is “biologically impossible” to change the sex you were born with, and that those who advocate “sexual reassignment surgery” are thus promoting mental illness.

And as I have documented previously, when men compete with women in sporting events, big trouble can only result. We have had female athletes taken to the hospital as a result of this madness. How many more women must be battered and bruised by men, and maybe even die, before we wake up to the insanity of this gender bender activism?

Walt Heyer who has transitioned back and forth knows all about this. He writes:

No objective tests can prove that the transgender condition exists. No physical examination, blood test, bone marrow test, chromosome test, or brain test will show that a person has gender dysphoria. It is a condition revealed solely by the patient’s feelings. Yet the recommended treatment is extreme—cross-gender hormones and sex-reassigning surgery.

I for one am glad that Hubbard had to pull out of the Commonwealth Games. But this issue is far from over. It is time that some sanity and reality comes back into professional sports. If not, we will see the end of women’s sports, and perhaps the death of some key female athletes.

All because nutjob ideology and loony tune social and sexual activism have taken over reality.

16 Replies to “The Trans Destruction of Sport”