Our damnable apathy, indifference and silence has helped to kill all these people, and next it will be our own family members. While little Alfie is now in a better place, one can rightly ask how his death came about. Yes, there was all the evil emanating from doctors, hospitals, judges, courts and the State. 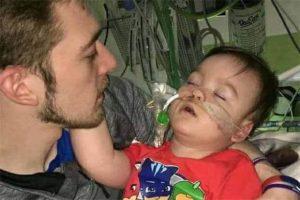 But they have simply been empowered to do what they do because of our horrific apathy, indifference and silence. Thus we all have had a hand in the death of little Alfie. Sure, we expect many folks to not give a rip about any of this. Already some ugly atheists have been celebrating his death, saying he should have been bumped off long ago. But we expect such vile bile from these morally perverse misotheists.

But I would have thought that some others should have shown far more interest and spoken out much more – eg., Christians, conservatives, etc. Yes, a number of them did. I tried to do my bit – this is my fourth article in four days on this case. But for the most part the silence was deafening, even from those who should have known better.

The truth is the West is now more or less dead, and so such widespread and disgusting indifference and apathy is to be expected. The cult of death rules, while humanity and a culture of life are struggling. As usual, such decline and decay does not happen overnight. It takes a while for the rot to set in.

But after decades, and now centuries, we have pretty well bottomed out as a culture. Much of the West is now in terminal decay. Let me just mention my own country of Australia. Why do I suspect that for every person here who cares greatly about what has happened in Liverpool, a thousand are far more concerned how their fav team fares this weekend?

This is how the West dies: widespread selfishness, coupled with bread and circuses. It is a perfect recipe for cultural suicide. Our own apathy and unwillingness to speak out about the things that matter lead the way here. Christians will scream themselves hoarse at a football match, but never once like or share a pro-life post on the social media for fear of offending someone.

We will spend hours telling our buddies about our new car, our new wardrobe, or our new big screen TV, but we will remain completely silent when gross evil raises its ugly head all around us. We condemn ourselves with our indifference and with our silence.

Indeed, our national schizophrenia is so very telling. At the same time that much of England and the world celebrated the birth of Louis Arthur Charles to Kate Middleton and Prince William this week, they remained absolutely silent on the death of another precious soul.

All I can do here is remind us all what the sins of apathy and cowardice look like. Let me do this by offering a few quotes from those who know all about this. I begin with American abolitionist William Lloyd Garrison who put it this way 150 years ago:

I am aware that many object to the severity of my language; but is there not cause for severity? I will be as harsh as truth, and as uncompromising as justice. On this subject, I do not wish to think, or to speak, or write, with moderation. No! No! Tell a man whose house is on fire to give a moderate alarm; tell him to moderately rescue his wife from the hands of the ravisher; tell the mother to gradually extricate her babe from the fire into which it has fallen; — but urge me not to use moderation in a cause like the present. I am in earnest — I will not equivocate — I will not excuse — I will not retreat a single inch — AND I WILL BE HEARD. The apathy of the people is enough to make every statue leap from its pedestal, and to hasten the resurrection of the dead.

The famous suffragette Susan B. Anthony said this: “Cautious, careful people, always casting about to preserve their reputation and social standing, never can bring about a reform. Those who are really in earnest must be willing to be anything or nothing in the world’s estimation, and publicly and privately, in season and out, avow their sympathy with despised and persecuted ideas and their advocates, and bear the consequences.”

Dietrich Bonhoeffer, who died in a German prison for daring to resist Hitler and the Nazis said this: “Speak out for those who cannot speak. Who in the church today realises that this is the very least that the Bible requires of us?” And again:

Let the fellowship of Christ examine itself and see whether it has given any token of the love of Christ to the victims of the world’s contumely and contempt, any token of that love of Christ that seeks to preserve, support, and protect life. Otherwise however liturgically correct our services are, and however devout our prayer, however brave our testimony, they will profit us nothing, nay rather, they must needs testify against us that we have as a church ceased to follow our Lord.

And another Christian pastor who faced off against Hitler was Martin Niemoller. His famous quote is the one I paraphrased above. We must let his words sink in deeply:

How many of us spoke up for little Alfie? How many of us prayed for him, or wrote letters on his behalf, or even signed a petition? Or were we far too busy watching our latest fav TV show or playing our fav internet game? It is high time we started getting serious about the things that matter.