It is a sad reality that many churches today do not even talk about sin. But hopefully the more evangelical and Bible-based ones still do. And then you will hear about sins “without” like abortion or homosexuality, or sins “within,” such as fornication or greed or gossip or materialism, etc.

One sin not spoken about very often but which is certainly something that needs to be dealt with is the sin of an unteachable spirit. This sin can take various forms. Sometimes it simply means refusing to listen to and heed necessary correction and rebuke.

Perhaps there is some sin in your life and other concerned Christians point it out and urge you to deal with it, but you refuse to listen or see the need of repentance. Simply being close to the Lord and sensitive to the Holy Spirit in your life can help greatly here.

But I want to speak to some other types of an unteachable spirit, and this has much to do with being willing to learn, to alter one’s beliefs, to change one’s thinking when necessary, and to be open to other points of view. Of course I am not saying we should waver and be uncertain about core Christian teachings.

On basic biblical truths we must stand strong and resolute, and not give in to every wind of doctrine. Thus we can and should have certainty on things like the deity of Christ, the triune nature of God, the authority of Scripture, and the exclusive work of Christ at Calvary for our salvation. 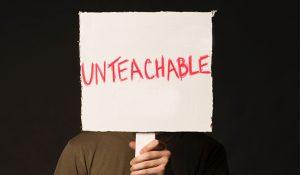 But there are so many other areas where a teachable spirit is so vital, and the lack of one causes so much trouble. All sorts of Christians get hung up on all sorts of issues, many of which we actually should have some room to move in. But many believers will stubbornly cling to one spin on things, and refuse to listen to any others.

Again, core biblical doctrines need to be solidly held on to, but secondary matters should be allowed more leeway. Part of this means not to major in minors. But I have written about this elsewhere: billmuehlenberg.com/2014/09/21/the-madness-of-majoring-in-minors/

And some of these minors that believers run with can often turn into full-blown cultism, at least when taken to extremes. I am still utterly dumbfounded that there are Christians who claim to be both biblical and intelligent who push the foolishness of flat earth theories. Good grief.

At the moment I am writing a rather long and detailed assessment of the King James Only movement. The more into this some folks get, the more cultic, belligerent and out of control they become. It is just utterly bizarre what some are saying here, and the extreme nonsense being peddled is not just embarrassing, but downright dangerous.

They will share an awful, unhelpful, fraudulent and misleading meme for example on the social media, and think they have somehow made their case. But the issues involved are actually incredibly complex and nuanced, and the majority of these folks do not have the slightest clue as to what they are talking about.

But when you try to calmly and rationally confront them with some facts and information, they show how utterly closed and unteachable they are. They will go into an emotional huff and get mad at you. They have no intention of hearing another version of events, and an iron wall springs up if anyone dares to try to offer some reason and common sense.

Clearly their hot button has been pushed, in other words, and they reveal that they do NOT have a teachable spirit, at least in this area. I have met far too many of these people over the years. They can be so difficult to deal with, and they seem to lack some basic humility and Christian grace.

BTW, for those who are now convinced that I am the devil incarnate and should be burned at the stake, please save your anger and invective for when my piece on the KJV-only silliness appears thanks. And even then, emotional rants and uninformed tirades will just be binned anyway!

Of course there are plenty of other issues like this where people basically just emote, and refuse to hear anything different. So I am not picking on just that particular hobby horse. There are heaps more out there alas. There are all sorts of theological or historical matters for example where folks go absolutely loony on, even though they really know little about such things.

They will come along pontificating about various matters as if they are some sort of experts, when it is absolutely clear that they really are way out of their depth. They really have no idea what they are rambling on about. As has often been said, a little knowledge can be a dangerous thing. And as Paul said, ‘knowledge puffs up’.

All this grieves me to no end, and I am sure it greatly grieves the heart of God. It is one thing to be well-intentioned and to share something you think might be true, because it is something you care deeply about. But if it happens to be false or incorrect or only partially right, the real Christian will be open to correction and to well-meaning rebuttals.

The genuine believer will test things out and be open to learn new things. But the immature, arrogant and proud believer will just get upset, shout even louder, and shut their ears to any opposing way of thinking. I have seen this happen time and time again. It is so painful to behold.

Related to this, some folks will completely misread and misunderstand what you have said or written. They will completely miss your point. But when you patiently try to explain to them how they have missed the point or taken it the wrong way, they often will just dig in their heels even further, get even more upset, emote even more, and keep on misunderstanding you!

Talk about frustrating! It seems they have made their minds up on these things. They have decided ahead of time what they want to hear, and they will just block out what they do not want to hear. Either they are just not very bright, or they are lousy reader or listeners, or maybe they are just pesky trolls who get their jollies out of arguing all the time.

I know of far too many people like this. They exist simply to argue it seems. You can explain something to them a half dozen times and they still will not get it – or choose not to get it. They will still misrepresent you, and they will still carry on with their lame arguments, bogus objections, and false accusations.

They have an unteachable spirit. You just cannot reach them. They do not want to be reached. Their head and their heart is shut tight like a drum. All this springs from the flesh, from pride, and from selfishness. They do not seek to learn, to grow, to develop intellectually and spiritually. It seems they just exist to get into fights with others. They seem to get their kicks out of that.

Not only should we not waste time with such people, but we can only really do one thing; pray for them. Pray that they get on their knees before almighty God and humble themselves and turn from their ugly arrogance and stubbornness. Unless that happens, they are not in a good place, and cannot easily be helped.

In contrast to this, the first thing any mature and thinking Christian does is show some basic humility. They are open to being proven wrong. They will be open to learning. They will take proper correction. They will readily accept differing points of view and check them out carefully to see if they might in fact be true.

They will NOT just pull out in a huff, take things personally, take offence when none was intended, and seek to shut down all debate and communication. They will not instantly unfriend you on the social media just because you had a somewhat different viewpoint on a minor issue.

They will not carry on about ‘you’re being mean to me’ and the like. They understand that simply having facts and evidence presented to them on a complex issue is not being mean. It is called debate, and adults should be able to deal with facts and data and discussion in an adult fashion.

If they can’t maybe they should avoid all discussions and debates. But there is a place of course to eventually let someone go if they are a serial troll, or if you have politely asked them several times to cease and desist if there are good reasons to do so.

We all need to take this matter seriously. We all can be unteachable, stubborn and impatient with others at times. We all can do better here. I know I have a long way to go in this area. But some folks are without question altogether closed to learning from others. They are arrogant and they have an unteachable spirit. They need to repent, and ask God to change them from within.

As Proverbs 26:12 puts it (in the Amplified Bible): “Do you see a man [who is unteachable and] wise in his own eyes and full of self-conceit? There is more hope for a fool than for him.”

5 Replies to “The Sin of an Unteachable Spirit”