The Bible the Christian reads contains two Testaments and 66 books. The Old Testament contains 39 books while the New Testament has 27 books. That is our Bible, and basically only false teachers and cultists will try to tell you we do not need the entire Bible.

But this has happened throughout church history. For example, the second century heretic Maricon insisted that we not only should jettison the OT, but he greatly reduced much of the NT as well, whittling it down mainly to some of Paul’s writings. Some hyper-grace teachers of today can come close to this as well, emphasising the importance of Paul almost to the exclusion of the rest of the Bible. 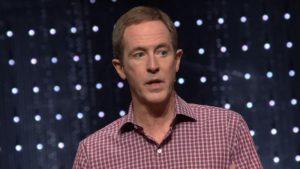 To be cavalier about the OT, or to minimise its importance is asking for trouble. We would have very little Bible left if we chose to ignore it. Indeed, it makes up over three quarters of our Bible (77 per cent to be exact!). So no biblical Christian can talk about overlooking it or downplaying it.

Yet that is just what has happened lately. A well-known American pastor has stirred up some real controversy by suggesting that Christians can go easy on the OT and mainly run with the NT. Andy Stanley, a Georgian pastor, and son of Charles Stanley, recently said in a sermon series that we Christians need to “unhitch” ourselves from the OT.

Now to be honest I have not listened to his entire series, but a report on this from the Christian Post seems to be reliable and even-handed, so I will base my remarks on that report. In fact, let me first run with some of the better things he is reported to have said, including:

The Jewish scriptures are the backstory for the main story. They’re an important backstory. They’re divinely inspired. They are God on the move through ancient, ancient times. It’s the fabulous story of God the Founder playing by the rules of the kingdoms of this world, to establish a kingdom not of this world. To send a king who would be like no other king. A king who lay down His life for His subjects. A king who would introduce the entire world to God the Father.

Nothing wrong with that, as such, but it is what he also said that has so many Christians rightly concerned. The report also says this:

North Point Community Church Senior Pastor Andy Stanley has stated that Christians need to “unhitch” the Old Testament from their faith. In the final part of a recent sermon series, Stanley explained that while he believes that the Old Testament is “divinely inspired,” it should not be “the go-to source regarding any behavior in the church”…
“The Bible did not create Christianity. The resurrection of Jesus created and launched Christianity. Your whole house of Old Testament cards can come tumbling down. The question is did Jesus rise from the dead? And the eyewitnesses said he did.”
Stanley acknowledged that his comments may be considered “a little disturbing” to some, but then added that for many it is “liberating.” “It’s liberating for men and women who are drawn to the simple message that God loves you so much He sent His Son to pave the way to a relationship with you,” Stanley said.
“It’s liberating for people who need and understand grace, who need and understand forgiveness. And it’s liberating for people who find it virtually impossible to embrace the dynamic, the worldview, and the values system depicted in the story of Ancient Israel.” While noting that he believed the church needed to unhitch itself from the Old Testament, Stanley still regarded the Jewish scriptures as having importance, saying they were “a means to an extraordinary end.”

Hmm, notice the emphasis on behaviour here. What is all that about? Stanley has had some problems over the years, especially on the issue of homosexuality. He has urged Christians to basically opt out of the culture wars, and has claimed that Christians can believe different things about matters such as homosexual marriage.

So it seems that what he is saying here is more of the same. He seems eager to detach himself from the OT – perhaps because of its clear teachings on homosexuality. But of course the NT is just as clear on the topic. So if this push to ease up on the OT is part of a way to go easy on homosexuality, we can see why Stanley might be doing this, but we can also see why he is so very wrong.

That case I have made many times over, so I will not repeat it here. But let me say that he also seems to be trying to give us the impression that the God of the OT is somehow different from the God of the NT. You know, he is wrathful and judgmental in the OT, but gracious and merciful in the NT.

Nothing could be further from the truth. And that I have also written about in the past. See here for example: billmuehlenberg.com/2012/02/27/modern-day-marcionism/

It is not my intention to single out Stanley here. Others have said similar sorts of things. And there is no question that Christians need to think carefully about how we understand the OT and how it relates to the NT. This is a massive discussion, and whole libraries already exist seeking to deal with it.

While the OT is fully the inspired Word of God, just as the NT is, we do know that there is both continuity and discontinuity between the Testaments. That is, some things obviously carry over (the nature and character of God for example) while some things do not (Christians today no longer offer sacrifices in a temple to Yahweh – there is no temple, so we can’t, even if we wanted to).

So Christians can and do differ on how exactly we understand the OT law for example, and how it applies today. Again, this is a massive discussion, but as I have written before, the common three-part division of the law – while a bit arbitrary – can still be rather useful.

Thus we believe the moral law (things like the Ten Commandments) continue today, while the ceremonial law (dealing with sacrifices and offerings), and the civil law (dealing with Israel as a nation) may not carry over, at least directly.

But much more needs to be said about this, and I have tried to do that elsewhere, eg., billmuehlenberg.com/2015/01/30/leviticus-law-and-love/

So if Stanley is simply saying that we need to think carefully about how we understand the OT in the light of the NT, that would be one thing. But it seems he is trying to say more than that. As I mentioned, given his somewhat weak position on the issue of homosexuality, that seems to be a motivating factor for him here.

He seems to want to emphasise the grace, love, mercy and forgiveness of God (something we all should do and all should celebrate), but at the same time downplay or minimise the holiness, purity, justice and wrath of God. That is always a recipe for disaster.

The same God who is loving and merciful is also holy and implacably opposed to sin. And we see all these attributes of God fully manifest in BOTH Testaments. He is just as gracious in the OT for example as he is holy in the NT. So any attempt to pit God against himself, or the Testaments against each other, is really to stand on dangerous ground.

Today when biblical literacy is at an all-time low – at least in the West – and when, I suspect, most Christians have never even read the OT all the way through, now is NOT the time to talk about ‘unhitching’ the OT from our faith. Now is the time to talk about hitching and re-hitching the OT to our Christian faith and practice.

14 Replies to “One Bible, Two Testaments”