I have been reading a whole lot of books on revival of late. Absolutely inspiring stuff. In these dark days in this ungodly world I would think that all true followers of Christ would be desirous of and praying for heaven-sent revival. They would know this is the need of the hour, and without it we are in a real bad place. 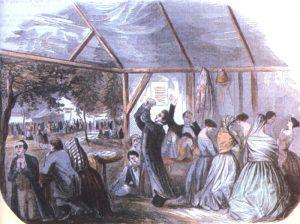 Unless we see God breaking forth in a new and powerful way, the death, degradation and decline we see all around us will only get worse. We need a mighty move of God, beginning in our largely moribund and comatose churches, and spreading out to the rest of society.

Anyone reading about the history of revival knows that this has happened often in the past. And they know what amazing things happened as a result of the Spirit of God working wonders among God’s people. We need to remind ourselves of what God has done in the past, and pray and seek for more of the same today.

With that in mind I offer just a few snippets from a few of the better-known revivals. They give us a small sense of what happened, how revival occurred, and what were the results. And we can hopefully use this as prayer fodder and plead with God: “Do it again Lord”.

The Cambuslang (Scotland) revival of the 1740s

“The movement started because of the fervent seeking of God’s face by William McCulloch, pastor and leader of the little congregation in Cambuslang, a small community a short distance from Glasgow…. McCulloch fell under deep conviction of the dire need of renewal in his beloved congregation. At the same time, nearby, John Welsh, a devout Scot and profound man of prayer, experienced a deepening of his prayer life. He began interceding eight hours out of every twenty-four, often spending days and nights in fasting and prayers for revival. It was reported of him, ‘On the coldest winter nights . . . he hath been found lying on the ground weeping, and wrestling with the Lord’…. A deep thirst for the things of God began to sweep the entire parched community. Conviction took hold of many. By February 14 [1742], the church was overflowing with people seeking Christ, many standing for want of seats. In after-meetings, people wept in anguish of souls, crying out for salvation. The awakening was under way.” Lewis Drummond, Eight Keys To Biblical Revival

“At Cambuslang in 1742, Dr John Hamilton of Glasgow observed: “I found a good many persons under the deepest exercise of soul, crying out most bitterly of their lost and miserable state, by reason of sin; of their unbelief, in despising Christ and the offers of the Gospel; of the hardness of their heart; and of their gross carelessness and indifference about religion,..not so much…from fear of punishment as from a sense of the dishonour done to God…” Brian Edwards, Revival

“Fear gave way to peace and mourning to rejoicing. Accordingly, we need not wonder that after such experiences there were those who could not contain their feelings and that some remained in the fields [after the preaching of Whitefield] praising God throughout the night and were still there and still praising when morning dawned. Indeed, such joy was more a part of this work than the sorrow over sin. It appears many believers found themselves so moved by a sense of the Saviour’s love to them and, in turn, by their new love to Him, as to be lifted almost into a state of rapture. Whitefield, as we have seen, is spoken of as being ‘in a kind of extasy’ and others are said to have been ‘ravished with Christ’s glory’ and ‘captivated by his loveliness.’ The phrase ‘joy unspeakable and full of glory’ occurs frequently in the Cambuslang records and undoubtedly depicts the experience of many, among both the new converts and the established Christians.” Arnold Dallimore, George Whitefield, vol. 2

“In the Irish Revival of 1859, people became so weak that they could not get back to their homes. Men and women would fall by the wayside and would be found hours later pleading with God to save their souls. They felt that they were slipping into hell and that nothing else in life mattered but to get right with God… To them eternity meant everything. Nothing else was of any consequence. They felt that if God did not have mercy on them and save them, they were doomed for all time to come.” Oswald J. Smith

“One morning, a number of young women in a spinning mill were seriously overcome. Anxiety spread among the workers and, within an hour, twenty to thirty persons were prostrated. The business was so interfered with that the mill had to be closed.” Mark Stibbe, Revival

“The scourge of Ulster society in 1859 was intemperance. At fairs and markets, funerals and weddings, the ‘whiskey demon’ played havoc with many victims. The revival, however, dealt with this foremost evil and parent of all others, in no uncertain manner…. In Connor, the cradle of the awakening, two public houses were closed by the conversion of their owners. A third was forced out of business by a complete loss of trade, and the total business done by the remaining six did not equal the trade of any single one before the revival. Before the revival, Ballymena had 120 public houses. Those which did not close down were completely deserted, and a publican declared that no man could live by his trade now.” Ian Paisley, The “Fifty Nine” Revival

“By March 1859 revival fires burned in a number of villages. The Holy Spirit was reaping the harvest of years of faithful Welsh preaching and recent years of praying…. The revival fire and blessings spread from church to church among all denominations, into outlying villages and other countries. A tremendous work of God spread through the men working in the huge state quarries. Revival spread like a belt of fire encircling the mountains…. One village reported that all the churches there had new believers, chiefly young people. Another town reported scores saved, including the greatest drunkards of the area. News from yet another place reported that the Holy Spirit had been poured out and blasphemers were humbly seeking God. Revival was almost universal in the area.” Wesley Duewel, Revival Fire

“Political meetings were cancelled. Soccer matches had neither players on the field nor fans in the stands. Theatres closed down due to low attendance. Gambling and alcohol business lost their trade. And doctrinal barriers came tumbling down as Christians from all denominations worshipped together in the Spirit’s move. Some of the reporters themselves were converted at the meetings. Soon bars and movie houses closed. Former prostitutes started holding Bible studies. People began to pay their longstanding debts. And those who selfishly wasted their money on alcohol suddenly became a great joy and support to their families….
As a result of the revival, local stores couldn’t keep Bibles in stock. The Welsh coal mining industry also took on a new look. Their workhorses had previously been trained to respond to instructions that included profanity. But with the coal mining crew now born again, they found that their horses had to be re-trained because the animals didn’t know how to follow a normal command without a curse word in it.” Robert Liardon, God’s Generals

“In a short while the whole of the country was aflame. Every church was stirred to its depths. Strong men were in tears of penitence, and women moved with a new fervour. People were overpowered by the Spirit as on the day of Pentecost, and were counted as drunken men. In the services they were praying, singing and testifying. It was a church revival, turning Christians everywhere into witnesses.” Rees Howells

“With less than a score of intercessors when it burst, the churches of Wales were crowded for more than two years; one hundred thousand outsiders were converted, drunkenness cut in half, and many taverns driven into bankruptcy. Crimes were so diminished that judges were presented with white gloves signifying there were no cases of murder, assault, rape, robbery, or the like to consider. The police became ‘unemployed’ in many districts.” J. Edwin Orr

Do it again Lord

This is only a tiny offering of what might be offered here. Entire libraries exist on revival, its origins, and its impact. I recently listed a number of helpful volumes on this. See here: billmuehlenberg.com/2018/04/12/what-to-read-on-revival/

But this handful of quotes should greatly excite and enflame all believers, and create within our spirits a burning desire to see God move in such mighty ways once again today. The question is, do we really desire revival? Are we praying for revival? Are we distressed and in grief over the lax state of much of Christianity in the West today?

Unless we get God’s heart on this, it will just be more business as usual. And as Leonard Ravenhill rightly said, “The only reason we don’t have revival is because we are willing to live without it!” Several more of his quotes are worth concluding this piece with:

“If the Church today had as many agonizers as she has advisors, we would have a revival in a year.”

“Many people express an interest in revival. There are not so many deeply concerned about it, and fewer still burdened for it, still fewer heartbroken for it.”