The book of Proverbs contains 31 chapters, the first nine of which clearly make up a self-contained unit, serving as an introduction to the rest of the book, which is mainly a collection of various sayings, proverbs and maxims. In the introduction the reader is strongly urged to pursue wisdom above all else.

Solomon is mentioned five times in the book, and in 1 Kings 4:29, 32 we read: “And God gave Solomon wisdom and understanding beyond measure, and breadth of mind like the sand on the seashore…. He also spoke 3,000 proverbs, and his songs were 1,005.” 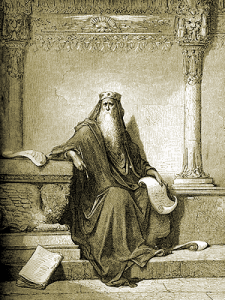 His are not the only proverbs to be found here, but most of them seem to be his. The proverbs offer general rules for living the good life, as God sees it. The proverbs found here differ from what we find in the law portions of the Old Testament. As the ESV Study Bible explains:

Proverbs is not at all the same as the Law or the Prophets. The difference is one of emphasis rather than basic orientation. The Law and the Prophets lay their stress on the covenant people as a whole, called to show the world what restored humanity can be; Proverbs focuses on what such restoration should look like in day-to-day behavior and in personal character.

There are a number of key themes dealt with in this book, of which just a few can be highlighted here. Along with several choice proverbs under each section, I will also include a brief word of commentary from others:

-The fear of the Lord

While the biblical books we call wisdom books recommend fear of the Lord (see also Job 28:28; Eccl. 12:13–14), the phrase is especially prominent in Proverbs, coming as a kind of evangelistic sermon that calls readers to take on this basic orientation toward life and God. (Paul Koptak)

Prov 10:4-5 A slack hand causes poverty,
but the hand of the diligent makes rich.
He who gathers in summer is a prudent son,
but he who sleeps in harvest is a son who brings shame.
Prov 11:28 Whoever trusts in his riches will fall,
but the righteous will flourish like a green leaf.
Prov 22:2 The rich and the poor meet together;
the Lord is the Maker of them all.

After studying the passages, I settled on the following seven categories of what Proverbs says about wealth and poverty:
-God blesses the righteous with wealth.
-Foolish behaviour leads to poverty.
-The wealth of fools will not last.
-Poverty is the result of injustice and oppression.
-Those with money must be generous.
-Wisdom is better than wealth.
-Wealth has limited value. (Tremper Longman)

Although I must hasten to add that Proverbs also tells us that poverty can be the result of laziness and irresponsibility, eg., Prov 12:24, 27.

-Folly and the fool

Prov 9:9 Give instruction to a wise man, and he will be still wiser;
teach a righteous man, and he will increase in learning.
Prov 12:15 The way of a fool is right in his own eyes,
but a wise man listens to advice.
Prov 15:2 The tongue of the wise commends knowledge,
but the mouths of fools pour out folly.

There are massive differences between individuals, but there are often enough commonalities to allow for categorizations such as wise and fools (10:1, 5). Proverbs divides humanity into two classes: the wise and righteous over against fools and the wicked. These wisdom and ethical terms are correlative, for though they do not mean the same thing they have the same referent. (Bruce Waltke)

Interpreting and applying the proverbs

One of the most important things we need to understand about the proverbs is they are NOT absolutes or unbreakable promises or ironclad guarantees that are made to everyone, everywhere, and at all the times. They are general principles that apply to life, but the right time or circumstance can be crucial in applying them.

The classic passage that demonstrates this is Proverbs 26:4 which says:

“Answer not a fool according to his folly,
lest you be like him yourself.”

So what is problematic about that? It is true, right? Well yes, but wait a moment – just read the very next verse (26:5):

“Answer a fool according to his folly,
lest he be wise in his own eyes.”

Um, so which one is it? Well both actually, but it all depends on the person and the place, on the time and the circumstance. Sometimes a fool needs to be rebuked, but at other times it is best just to ignore him. Wisdom and discernment is needed as to which approach is the right one for the right person for the right time.

Thus these are not absolute commands that we must run with, but guiding principles to help us navigate our way through life. As Lindsay Wilson comments:

This actually helps us to see the nature of proverbs. Few proverbs are designed to cover every situation. ‘Too many cooks spoil the broth’ and ‘many hands make light work’ both seem to be true, but they cannot both apply to the same situation at the same time. Similarly, Proverbs tells us that we need wisdom to know when not to answer fools according to their folly (v. 4) and when to answer (v. 5). Both are true and helpful as proverbs, but we need to discern which is the best proverb for any specific circumstance…. The difficulty is knowing when to rebuke and when to ignore.

As Fee and Stuart say in their quite helpful How To Read the Bible Book By Book:

Their function is to offer practical instruction for the young, with the focus on how to live uprightly and well in a society that understands itself to be under God. It is important to remember that these proverbs functioned primarily in the home to reinforce the benefits of living prudently and well in everyday life; they are not religious instruction as such. Nonetheless, their goal is to mold the character of the young in ways that conform to the law, even if the law itself is not mentioned.

Their method is the same as with proverbs universally – to express important truths for practical living in ways that are memorable and thus repeatable. This is done by overstatement, by “all or none” kinds of phrases, or by catchphrases that are not intended to be analyzed for their precision. Sometimes it is the overstatement-which speaks truth but not the whole truth-that makes the point. Take, for example, the American proverb, “A penny saved is a penny earned.” While true, its point is thrift, not that one should never spend. Or take its reverse, “A fool and his money are soon parted” which reminds one of the need for thrift in a different way. The latter has an earlier counterpart in Proverbs 17:16. “Of what use is money in the hand of a fool, since he has no desire to get wisdom?” Thus what is at stake for you in reading the proverbs is to determine their point by looking carefully at their content and poetic form, but to be careful also not to make them “walk on all fours”-and not to ignore counterproverbs, which also speak truth.

Or as Tremper Longman expresses it, looking at Prov. 10:1,

This proverb is not insisting on an absolute law; it is rather putting forward a generally true principle that depends on the right time and circumstance. Indeed, to read a proverb as if it were always true in every circumstance is to commit a serious error: we call it the error of genre misidentification. The proverb form, no matter the cultural background, presupposes the right circumstance for its proper application.

In sum, we have here some important, basic rules and principles for living a wise life and good life – a life pleasing to God and helpful for others.