These are the last two poetic books, or wisdom literature books, in the Old Testament. It next moves on to the prophetic books, the last main section of the OT in our English Bibles. These two brief books may be among the least read and the least understood OT books by Christians today.

Both have their fair share of challenges, and both have all sorts of hermeneutical questions that arise. But both are part of inspired Scripture, and both deserve careful reading and study. And to help in that purpose, I offer this article, the latest in my series of Bible study tools.

We are all familiar with the phrase, “Vanity, vanity, all is vanity”. It comes from Ecclesiastes, and the word “vanity” is found over 30 times in this book. The Hebrew term literally means “vapour,” and can also be translated meaninglessness, futility, or emptiness. Depending on the context, it can refer to that which is fleeting, ephemeral, elusive or inscrutable. 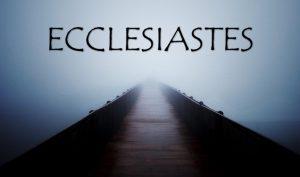 The question immediately arises: how does such a seemingly bleak and dark view fit in with the totality of biblical revelation? Indeed, plenty of questions arise here. As David Hubbard notes, “Few Old Testament writings have produced such a flurry of opinions as to how they should be read and what they mean.”

Even the identity of the speaker, Qohelet (the Hebrew term, sometimes translated preacher or teacher), is still a matter of discussion. Some OT scholars like Walter Kaiser equate him with Solomon, while others, such as Tremper Longman, don’t think so.

And then there are questions of authorship, dating, and the like. Moreover, various schemes for trying to interpret the book have been proposed over the centuries. Detailed discussions about these various issues and related matters can be found in the introductions of the commentaries listed below.

But still there are questions about such a seemingly negative and dreary worldview, and how it fits in with the rest of Scripture. And we seem to get mixed messages in the book, as if more than one voice were speaking. As Michael Eaton puts it,

The major interpretive problem of Ecclesiastes is to understand its apparent internal contradictions and vicissitudes of thought. At times the Preacher seems to be gloomy, pessimistic, a skeleton at the feast; everything comes under his lashing scorn: laughter, drink, possessions, sex, work, wisdom, riches, humour, children, even righteousness. Yet, at other points he urges that we should enjoy life, that there is nothing better than to eat well, enjoy our labour, receive with gladness the riches God gives us but be content if he gives none. A man, he says, should seek wisdom and knowledge, drink his wine with a merry heart, and live joyfully with the wife he loves. The Preacher’s argument and his relationship to Israelite orthodoxy seems ambiguous. At times he appears to overthrow everything Israel stood for; at other points we see the traditional view of God as sustainer and judge of all things, who gives life to men and who may be worshipped at Israel’s focal point, the temple.

What we do all know however is that the book finishes on a high note, that is, a very biblical note. As we read in 12:13-14): “The end of the matter; all has been heard. Fear God and keep his commandments, for this is the whole duty of man. For God will bring every deed into judgment, with every secret thing, whether good or evil.”

So whether the bulk of the book presents a perspective of the man apart from God (“under the sun” – 1:3), or a backslidden believer, or just life in a fallen world, etc, it lets us know what the final resolution is to be. A simple, brief outline of Ecclesiastes is this:

By all accounts this book – also called the Song of Solomon – is a love story. But the questions are many: Did Solomon write it? Is he the main character? Is this just about physical love? Is it merely allegorical? Should we spiritualise all this? How exactly are we to interpret this book? G. Lloyd Carr puts it this way:

“The major problem a commentator must face with this book is deciding what sort of literature this is and what basic approach to take in interpreting it.” He notes the four main ways of dealing with the question over the centuries: allegory; typology; drama; and the natural, or literal.

He opts for the last one and says, “The Song is a celebration of the nature of humanity—male and female created in God’s image for mutual support and enjoyment.” David Hubbard lists four themes of the book:

Iain Provan offers a helpful overview of how we should think about such matters:

The Bible teaches us of a creation that is good and of a sexuality that is a hallowed aspect of what is good (Gen. 1). It knows that sexuality is touched by sin and damaged, as are all aspects of creation; but redemption, biblically, is not about escape from createdness. It is about the restoration of the image of God in human beings (as well as the renewal of all creation); such restoration involves, at least on this side of eternity, the restoration of sexuality and sexual expression as it should be under God.…

There is no justification, then, for thinking that Christian living must necessarily be ascetic living or that ascetic living is somehow more spiritual than living that is not ascetic. God made everything good—and it remains good, even though marred by sin. Sexual expression remains good in itself, even though touched by sin (whether committed by us or upon us).

Or as Richard Hess says,

The Song fills a necessary vacuum in the Scriptures because it endorses sex and celebrates it beyond all expectation. Although abuse is possible and to be avoided, sex is not inherently evil, nor is it limited to a procreative function. Instead, sex enables an experience of love whose intensity has no parallel in this cosmos and serves as a signpost to point to the greater love that lies beyond it.

Finally, a summary statement from Duane Garrett: “In contrast to the tendency to treat sexuality as intrinsically vile and the antithesis to holiness, the Song of Songs presents sexual love as a thing of great beauty and an activity that enriches human life. The Song teaches that love and sex are good.”

Given the dark days that we now live in, in which everything good is perverted, and theological revisionism is rife, some further words from Garrett are needed here. He goes on to say:

Song of Songs does not prescribe rules for human sexual life or even explicitly speak of them (with one significant exception), but this does not mean that there is no moral outlook pervading the text. The sexuality of the Song is monogamous and heterosexual. This is not imposing a bourgeois Protestant morality on the Song. In reality, heterosexual monogamy is the foundation for all of the Song’s celebration.

The sexuality of the Song is heterosexual; a “gay reading” of the Song is the most violent kind of an imposition of extrinsic values on the Song. Not only are the central lovers in the Song male and female, but it is understood that this is the outlook of the community at large. At the beginning of the Song, when the splendors of the man’s love are being praised, the woman responds that the girls “rightly” love the man (Song 1:3–4).

This love is monogamous in nature. The woman is to the man “my sister, my companion, my bride” (e.g., Song 5:1). She is the lotus blossom; all other women are thorns (Song 2:2).

Devotional books and expository commentaries include:

3 Replies to “Bible Study Helps: Ecclesiastes and Song of Songs”