Forty years ago a very significant commencement address was given to the graduating class of Harvard University. It was delivered by one of the most important figures of last century, Alexander Solzhenitsyn (1918-2008). The Soviet dissident, author and historian did much to help bring about the end of Soviet Communism and the Cold War.

I wrote about him often, including when he passed away: billmuehlenberg.com/2008/08/04/the-passing-of-a-prophet-vale-solzhenitsyn/ 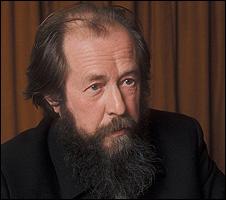 But here I want to look again at his incisive and prophetic address he gave exactly 40 years ago. The background is this: He was a political prisoner from 1945 to 1953. In 1962 his important work exposing the Soviet labour camps, One Day in the Life of Ivan Denisovich was published.

In 1970 he was awarded the Nobel Prize in literature. He was deported from the USSR in 1974 for publishing The Gulag Archipelago. He lived in Europe for several years and then settled in Vermont in 1976. Harvard University conferred on him an honorary doctor of letters degree, and invited him to be its commencement speaker.

The speech, delivered on June 8, 1978, was his first major public statement since his arrival in America. The same year Harper & Row published it as a paperback entitled A World Split Apart. In it he argued that a demoralised and post-Christian West was no match for, and not much better than, atheistic communism.

Let me offer some parts of it here. He begins by speaking about the importance of truth:

Harvard’s motto is “VERITAS.” Many of you have already found out and others will find out in the course of their lives that truth eludes us as soon as our concentration begins to flag, all the while leaving the illusion that we are continuing to pursue it. This is the source of much discord. Also, truth seldom is sweet; it is almost invariably bitter. A measure of truth is included in my speech today, but I offer it as a friend, not as an adversary.

He looks at the two main competing political and ideological systems:

It is almost universally recognized that the West shows all the world the way to successful economic development, even though in past years it has been sharply offset by chaotic inflation. However, many people living in the West are dissatisfied with their own society. They despise it or accuse it of no longer being up to the level of maturity by mankind. And this causes many to sway toward socialism, which is a false and dangerous current.

I hope that no one present will suspect me of expressing my partial criticism of the Western system in order to suggest socialism as an alternative. No; with the experience of a country where socialism has been realized, I shall not speak for such an alternative. The mathematician Igor Shafarevich, a member of the Soviet Academy of Science, has written a brilliantly argued book entitled Socialism; this is a penetrating historical analysis demonstrating that socialism of any type and shade leads to a total destruction of the human spirit and to a leveling of mankind into death. Shafarevich’s book was published in France almost two years ago and so far no one has been found to refute it. It will shortly be published in English in the U.S.

But should someone ask me whether I would indicate the West such as it is today as a model to my country, frankly I would have to answer negatively. No, I could not recommend your society in its present state as an ideal for the transformation of ours. Through intense suffering our country has now achieved a spiritual development of such intensity that the Western system in its present state of spiritual exhaustion does not look attractive. Even those characteristics of your life which I have just mentioned are extremely saddening.

A fact which cannot be disputed is the weakening of human beings in the West while in the East they are becoming firmer and stronger. Six decades for our people and three decades for the people of Eastern Europe; during that time we have been through a spiritual training far in advance of Western experience. Life’s complexity and mortal weight have produced stronger, deeper and more interesting characters than those produced by standardized Western well-being. Therefore if our society were to be transformed into yours, it would mean an improvement in certain aspects, but also a change for the worse on some particularly significant scores.

It is true, no doubt, that a society cannot remain in an abyss of lawlessness, as is the case in our country. But it is also demeaning for it to elect such mechanical legalistic smoothness as you have. After the suffering of decades of violence and oppression, the human soul longs for things higher, warmer and purer than those offered by today’s mass living habits, introduced by the revolting invasion of publicity, by TV stupor and by intolerable music. All this is visible to observers from all the worlds of our planet. The Western way of life is less and less likely to become the leading model.

There are meaningful warnings that history gives a threatened or perishing society. Such are, for instance, the decadence of art, or a lack of great statesmen. There are open and evident warnings, too. The center of your democracy and of your culture is left without electric power for a few hours only, and all of a sudden crowds of American citizens start looting and creating havoc. The smooth surface film must be very thin, then, the social system quite unstable and unhealthy.

But the fight for our planet, physical and spiritual, a fight of cosmic proportions, is not a vague matter of the future; it has already started. The forces of Evil have begun their decisive offensive, you can feel their pressure, and yet your screens and publications are full of prescribed smiles and raised glasses. What is the joy about?

He concludes with these words:

Today it would be retrogressive to hold on to the ossified formulas of the Enlightenment. Such social dogmatism leaves us helpless before the trials of our times. Even if we are spared destruction by war, life will have to change in order not to perish on its own. We cannot avoid reassessing the fundamental definitions of human life and society. Is it true that man is above everything? Is there no Superior Spirit above him? Is it right that man’s life and society’s activities should be ruled by material expansion above all? Is it permissible to promote such expansion to the detriment of our integral spiritual life?

If the world has not approached its end, it has reached a major watershed in history, equal in importance to the turn from the Middle Ages to the Renaissance. It will demand from us a spiritual blaze; we shall have to rise to a new height of vision, to a new level of life, where our physical nature will not be cursed, as in the Middle Ages, but even more importantly, our spiritual being will not be trampled upon, as in the Modern Era. The ascension is similar to climbing onto the next anthropological stage. No one on earth has any other way left but — upward.

Absolutely. Yet incredibly this powerful, passionate and prophetic call was greeted with boos and derision by the ‘educated’ elites at Harvard. The spoiled, secular and amoral Harvard grads despised what he had to say. Yet it was exactly what they needed to hear.

And even more so do we need to hear such truths today. Our world is even more split apart than it was when he gave his speech. And truth is even more absent than it was then. We need more prophets like Solzhenitsyn. While all real prophets are rejected by the masses, we nonetheless need them more than ever.

The speech is online, and can be viewed here: www.orthodoxytoday.org/articles/SolzhenitsynHarvard.php

12 Replies to “Harvard, Solzhenitsyn and Truth”