Early on in my days of being a new Christian I learned of how important and how inspiring it is to read the stories of great Christians. These stories spoil you for life, and give you a restlessness for the extraordinary. One of the first of the amazing saints I read about was John G. Paton, the Scottish missionary to the New Hebrides.

I still have the old, large hardback autobiography of his – the 1907 edition. When I first read it many decades ago now, it so very deeply impressed me as to how much hardship and suffering one can willingly enter into for the sake of reaching the lost and glorifying God. 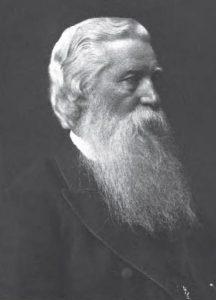 It seemed that on every other page a new calamity, tragedy or catastrophe befell him. And yet he persevered for the sake of uplifting the name of Christ among the cannibals of the New Hebrides. His name is now forever associated with the fully consecrated and committed life of the true servant of Christ.

Paton was born into a godly household in Scotland in 1824, the eldest of eleven children. They thought nothing of walking four miles to the Reformed Presbyterian Church every Sunday. Early on he had a strong sense of call to the mission field. He spent ten very fruitful years working with the poor as an evangelist for the Glasgow City Mission.

He was ordained in March of 1858, and within weeks married Mary Ann Robson, and set sail for the South Pacific. So successful was his ministry in Glasgow that most folks opposed his overseas move, and they did all they could to dissuade him.

They warned him how dangerous it was, spoke of the horrific cannibalism, and reminded him that martyrdom already happened (the first two missionaries there were killed in 1839). But the call of God lay too strongly upon him. As he said,

“If I die here in Glasgow, I shall be eaten by worms; If I can but live and die serving the Lord Jesus, it will make no difference to me whether I am eaten by cannibals or by worms; for in the Great Day my resurrection body will arise as fair as yours in the likeness of our risen Redeemer.”

So off they set, not knowing what their fate would be. They arrived on the island of Tanna on November 5. His son was born on February 12, 1859. But malaria and pneumonia struck and she died on May 3 at just 19 years of age, with the baby boy dying a few weeks later.

The islands were a stronghold of Satan, and he faced constant threats to his life. Some of his colleagues were killed and eaten by the natives. He came down with malaria and fever over a dozen times, his housing was destroyed more than once by hostile natives or cyclones, and his work was opposed throughout.

Most ordinary believers would have given up just after a month or two of this, but not Paton. He worked, he toiled, he prayed, and he ministered. He stayed there four years enduring dangerous and hostile conditions, until he basically needed to escape with his life.

He spent the next four years in Australia and the United Kingdom to get fresh recruits and stir up interest for the ministry. When he arrived in Sydney he knew no one, and had no contacts, but he persevered. He visited most Presbyterian congregations in southeast Australia, arranging his own meetings. In Victoria he spoke 265 times in 250 days.

On his second trip to Scotland he married Margaret Whitecross in June of 1864. They laboured together for over 40 years in the New Hebrides. They had 10 children, 4 of whom died quite young. They set up orphanages, engaged in education, dispensed medicines, and translated and printed Scripture.

They came to Aniwa in 1866, and after 15 years of hard work and great suffering, the entire island of Aniwa professed faith in Christ. His Aniwa New Testament was eventually printed in 1897, and soon there was the establishment of missionary work on twenty five of the thirty islands of the New Hebrides.

Over the next two decades three major word trips were taken – including the US, Britain and Australia – to alert people to the work on the islands, and the importance of world missions. The first trip commenced in 1884, with the final trip lasting two years in the early 90s, involving some 1400 audiences.

Margaret passed away in 1905 and he died in Melbourne, Australia in 1907. Their legacy endures. Today, a century on for example, the great majority of those in Vanuatu are Christians. And believers the world over look to Paton as a sterling example of the cruciform life, a life sold out completely to Christ, and set on reaching the lost.

Let me finish by simply sharing a few quotes from his autobiography. When I first read it so very long ago as a new believer, I highlighted a number of passages that certainly stood out, and so I here present some of them. The first one alone tells us of his heartache and trials, when he first arrived at the islands:

My dear young wife, Mary Ann Robson, landed with me on Tanna on the 5th November 1858, in excellent health and full of all tender and holy hopes. On the 12th February 1859 God sent to us our first—born son; for two days or so both mother and child seemed to prosper, and our island—exile thrilled with joy! But the greatest of sorrows was treading hard upon the heels of that joy! My darling’s strength showed no signs of rallying. She had an attack of ague and fever a few days before; on the third day or so thereafter, it returned, and attacked her every second day with increasing severity for a fortnight. Diarrhea ensued, and symptoms of pneumonia, with slight delirium at intervals; and then in a moment, altogether unexpectedly, she died on the 3rd March. To crown my sorrows, and complete my loneliness, the dear baby—boy, whom we had named after her father, Peter Robert Robson, was taken from me after one week’s sickness, on the 20th March. Let those who have ever passed through any similar darkness as of midnight feel for me; as for all others, it would be more than vain to try to paint my sorrows!

The women and children were treated appalling by the pagans on these islands, and the gospel was the only way to rescue them:

The girls have, with their mother and sisters, to toil and slave in the village plantations, to prepare all the materials for fencing these around, to bear every burden, and to be knocked about at will by the men and boys. Oh, how sad and degraded is the position of Woman where the teaching of Christ is unknown, or disregarded though known! It is the Christ of the Bible, it is His Spirit entering into humanity, that has lifted Woman, and made her the helpmate and the friend of Man, not his toy or his slave.

His life was in constant dangers, especially in his early years of missionary work. He never knew which day would be his last day:

Next day, a wild Chief followed me about for four hours with his loaded musket, and, though often directed towards me, God restrained his hand. I spoke kindly to him, and attended to my work as if he had not been there, fully persuaded that my God had placed me there, and would protect me till my allotted task was finished. Looking up in unceasing prayer to our dear Lord Jesus, I left all in His hands, and felt immortal till my work was done. Trials and hair-breadth escapes strengthened my faith, and seemed only to nerve me for more to follow; and they did tread swiftly upon each other’s heels. Without that abiding consciousness of the presence and power of my dear Lord and Saviour, nothing else in all the world could have preserved me from losing my reason and perishing miserably. His words, “Lo, I am with you alway, even unto the end of the world,” became to me so real that it would not have startled me to behold Him, as Stephen did, gazing down upon the scene. I felt His supporting power, as did St. Paul, when he cried, “I can do all things through Christ which strengtheneth me.” It is the sober truth, and it comes back to me sweetly after twenty years, that I had my nearest and dearest glimpses of the face and smile of my blessed Lord in those dread moments when musket, club, or spear was being leveled at my life. Oh the bliss of living and enduring, as seeing “Him who is invisible!”

But God sustained him and used these trials for his glory, as well as for Paton’s future ministry:

Oftentimes, while passing through the perils and defeats of my first years in the Mission field on Tanna, I wondered, and perhaps the reader hereof has wondered, why God permitted such things. But on looking back now, I already clearly perceive… that the Lord was thereby preparing me for doing and providing me materials wherewith to accomplish the best work of all my life: the kindling of the heart of Australian Presbyterianism with a living affection for these Islanders of their own Southern Seas… and in being the instrument under God of sending out missionary after missionary to the New Hebrides, to claim another island and still another for Jesus. That work, and all that may spring from it in time and Eternity, never could have been accomplished by me, but for first the sufferings and then the story of my Tanna enterprise!

Incredible stuff. As Paul Schlehlein says early on in his biography of the man:

“Missionaries like Paton need to be heard afresh. Our slumbering congregations devoid of zeal and passion need heroes with his kind of evangelistic pluck. Paton was an icon in his day – a household name in Great Britain and Australia. Contemporaries such as C. H. Spurgeon called him the ‘King of the Cannibals’.”

One can’t go beyond his autobiography, of which there are now numerous versions and editions. The one I have is this:

Also, one brand new and very helpful volume, and several older works can be mentioned: