Up until recently in the West we had rather minimalist governments, with individual freedoms much more widespread, and what we call mediating structures (the family, churches, civil associations) standing between the individual and the state.

Increasingly these institutions are being trampled on by the state, and as a result we are losing more and more freedom, and everything tends to get politicised. And when Big Government and Big Business team up to stand against our democratic freedoms, things quickly get out of control. 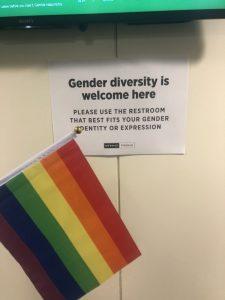 As both statists and corporatists completely fall for the agendas of the radical minority groups, they effectively conspire against the masses to ram all their destructive social engineering down everyone’s throats. We see this perfectly manifest with all things homosexual.

Governments and businesses are feverously pushing the radical homosexual and trans agendas, and as a result, life is becoming ever more politicised – in this case, sexually politicised. A perfect example of this was seen once again this weekend.

On Saturday night in Melbourne at Etihad Stadium a football match between St Kilda and Sydney took place, but it was part of a “pride round”. This meant that even a simple game of football now had to be politicised and turned into the cause of sexual activists and militants.

Thus we had rainbows on display everywhere (on the ground, on uniforms, etc), baloney talk about “diversity” and “inclusion” heard everywhere, and even ludicrous “gender-neutral” toilets at the stadium! I kid you not. Talk about the rainbow activists taking over everything.

In the old days at the end of a hard week of work or school, the family could look forward to a few hours of fun and relaxation on the weekend, supporting their favourite team. Now increasingly the footy is becoming decidedly family-UNfriendly.

All sorts of radical social agendas are being pushed, and football is no longer fun anymore. It has become one big exercise in political correctness and social engineering. We now have multicultural rounds and Muslim rounds and homosexual rounds. Many people are getting absolutely fed up with all this baloney.

As one news report states:

Etihad Stadium has introduced gender-fluid toilets for all spectators during the annual Pride Game between St Kilda and Sydney. Social commentators and footy fans have been divided by the move to designate three toilet blocks throughout the Docklands venue for all-gender use.

Signs posted throughout the stadium and then flashed on the giant screens inside the stadium advertised one toilet block on each level of seating have been converted into bathrooms that allowed spectators to use whichever gender bathroom they identified with.

The stadium signs read: “Gender diversity is welcome here. Please use the restroom that best fits your gender identity or expression.” The move follows the AFL’s staging of its annual Pride Game at Etihad Stadium, celebrated by St Kilda and the Swans before and during the round 12 game.

Both clubs have been widely applauded for their public support for inclusion of LGBTI communities in football and everywhere else in Australia. However, many other commentators believe Etihad Stadium’s decision to scrap traditional mens’ and womens’ gendered toilets was a dangerous development.
www.news.com.au/sport/afl/footy-stadium-sign-divides-australia/news-story/6b8e682b0f592a31c81591e884ac0da4

And if one online poll on this issue is anything to go by, the masses are absolutely incensed by all this PC madness and the ubiquitous homosexual juggernaut. The question was asked, “Do you support gender-inclusive toilets at Etihad Stadium?” When I last looked, a full 83 per cent had said no.

And as long as it is now really the GayFL, why would any normal footy fan want to be exposed to all their social engineering propaganda? Indeed, another piece shows that this madness may be spreading, unfortunately:

The home of Australian rules footy, the MCG, is open to making its public toilets assigned by gender identity and not by sex. Sports patrons took to social media yesterday to vent about Etihad Stadium’s decision to direct fans to use toilets that “best fits your gender identity or expression” at the weekend’s AFL Pride clash between St Kilda and Sydney. The male and female toilets at the ground were also marked with signs saying “gender diversity is welcome here”. Five disabled and baby-change toilets were promoted as gender-neutral.
www.theaustralian.com.au/sport/afl/mcg-open-to-gender-toilets/news-story/815e6af9e93fc8bd7a0216ca2011ca93

Oh for heaven’s sake! Get outta my game! Of interest, later this year Etihad Stadium will have new sponsors and a new name. It will become Marvel Stadium (Marvel is a Disney company). Disney of course has been pushing the homosexual agenda for years now.

But freedom and democracy are the first casualties of this ever-increasing politicisation. Concerned observers have of course been warning about this for a long time now. They have seen the slow but steady erosion of freedoms as the state takes over more and more roles, and engages in more and more social and cultural activities and outcomes.

One very important book discussing all this appeared in 1979. It is The Politicization of Society, edited by Kenneth Templeton. This collection of essays examines how private institutions and associations are being supplanted and usurped by the ever-expanding state.

Where once individuals saw their problems as private and sought private solutions for them, now they seek political solutions. Where once private initiative dominated, for example, in areas like cultural entertainment, now political initiatives dominate….

And this point is especially crucial here:

Powerlessness, and the sense of frustration that accompanies it, has been intensified, moreover, by renewed visions of the millennium, of that better world which the intellectuals dream up, and which the politicians promise but never deliver. With the failure of promises has come the identification of obstacles to progress, those individuals and institutions which prevent change.

Yes exactly, which is why we refer to these activists as “coercive utopians”. They actually think that all their political activism – in this case, the homosexualisation of everything – will make a better, ‘fairer’ world. But all it does is politicise everything, which is always the hallmark of tyrannical and repressive regimes.

So what we have here are the cultural Marxists at work, seeking to bring in by internal evolution what the older Marxists sought to bring in by external revolution. But the results are exactly the same: the all-powerful state which crushes everything, and subsumes everything.

It is the slow but certain crushing of human freedom, cultural values, and voluntary society, replaced by the all-knowing and all-powerful Big Brother. After all, Big Brother really does know what is best for you. We are called simply to submit – or else.

So if you are scratching your head at the absolute madness that took place this weekend at Etihad Stadium, there is a reason why all this is happening. It is not coming about by accident. Militants, activists and social engineers are working with the state and with so much of big business to implement their radical agendas, and everyone must simply become subservient to all this.

If you dare to differ, you WILL be punished. We should have learned these lessons from the failed experiment of godless communism. But sadly we have not, so we are seeing history repeat itself, with all its dehumanising ugliness and corruption.

39 Replies to “The Sexual Politicisation of Everything”