When lunacy abounds – as it so much does in the West today – we need a restoration of reason and common sense. When so much of our collective leadership is afflicted with moral and mental illness, then we need a tonic to get us back to where we belong.

Some of the earlier writers can be counted on to help us out in this regard. And one of the best in all this is G. K. Chesterton. He seemed to have an answer for any old or new foolishness. He not only rebuts old superstitions and irrationalities, but he anticipates new ones as well. 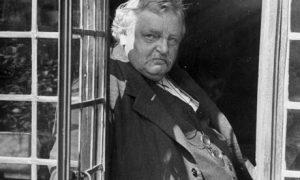 So no matter how novel the new craziness may seem, it is likely that Chesterton has already addressed it somewhere. He knows there is nothing new under the sun when it comes to all the wild and reckless thoughts we concoct as we pretend God does not exist and as we imagine that we can just make things up as we go along.

The recent madness emanating from the trans cult would have been a perfect foil for Chesterton. He would easily have destroyed the lunacy that lies behind it. Indeed, without it having raised its ugly head a century ago, Chesterton still could write about it.

To help you see his prophetic thinking on such matters, let me refer you to just a sentence or two from just one chapter, from just one of his books. But before getting to that sentence, let me first sing some praises for the book. I refer to what I have long maintained as being my all-time favourite book: Orthodoxy.

I have previously written about it and quoted from it often. See here for example: billmuehlenberg.com/2011/01/24/notable-christians-g-k-chesterton/

Before getting to that particular quote, let me cite another writer whose book I just recently picked up. Ralph Wood’s The Nightmare Goodness of Chesterton (Baylor University Press, 2011) devotes various chapters to some of his books. In his chapter on Orthodoxy he says this:

Though Chesterton died when the twentieth century was barely a third finished, we still dwell in his epoch. Our age belongs to him because he was its true physician, both probing our illnesses and prescribing our cure. Orthodoxy remains his most prophetic book because it foresees both the insane rationalism and the lunatic irrationalism that engulf late modern life, with nightmarish results.

He also reminds us of how others thought of this work:

Graham Greene described Orthodoxy as “among the great books of the age,” calling Chesterton “a man of colossal genius.” Dorothy L. Sayers was inspired to reclaim her natal Christianity mainly by reading Orthodoxy…. Even H. L. Mencken, perhaps the most antithetical figure imaginable, praised Orthodoxy as “Indeed, the best argument for Christianity I have ever read – and I have gone through, I suppose, fully a hundred.”

Anyway, back to the words of Chesterton that I had in mind which can apply so readily to the modern transgender insanity. He simply makes the same point that others, going back at least to Aristotle, have made. His two sentences are these:

“You can free things from alien or accidental laws, but not from the laws of their own nature. You may, if you like, free a tiger from his bars; but do not free him from his stripes.” Yep. Or in today’s case, you can free a girl from wearing a dress; but you cannot free her from her own DNA.

No amount of wishful thinking and hoping to identify as something or someone you are not can change things. Reality cannot be twisted so easily. But let me offer the entire lengthy paragraph in which these brief sentences are found. They come from chapter 3 of Orthodoxy, “The Suicide of Thought”:

All the will-worshippers, from Nietzsche to Mr. Davidson, are really quite empty of volition. They cannot will, they can hardly wish. And if any one wants a proof of this, it can be found quite easily. It can be found in this fact: that they always talk of will as something that expands and breaks out. But it is quite the opposite. Every act of will is an act of self-limitation. To desire action is to desire limitation. In that sense every act is an act of self-sacrifice. When you choose anything, you reject everything else. That objection, which men of this school used to make to the act of marriage, is really an objection to every act. Every act is an irrevocable selection exclusion. Just as when you marry one woman you give up all the others, so when you take one course of action you give up all the other courses. If you become King of England, you give up the post of Beadle in Brompton. If you go to Rome, you sacrifice a rich suggestive life in Wimbledon. It is the existence of this negative or limiting side of will that makes most of the talk of the anarchic will-worshippers little better than nonsense. For instance, Mr. John Davidson tells us to have nothing to do with “Thou shalt not”; but it is surely obvious that “Thou shalt not” is only one of the necessary corollaries of “I will.” “I will go to the Lord Mayor’s Show, and thou shalt not stop me.” Anarchism adjures us to be bold creative artists, and care for no laws or limits. But it is impossible to be an artist and not care for laws and limits. Art is limitation; the essence of every picture is the frame. If you draw a giraffe, you must draw him with a long neck. If, in your bold creative way, you hold yourself free to draw a giraffe with a short neck, you will really find that you are not free to draw a giraffe. The moment you step into the world of facts, you step into a world of limits. You can free things from alien or accidental laws, but not from the laws of their own nature. You may, if you like, free a tiger from his bars; but do not free him from his stripes. Do not free a camel of the burden of his hump: you may be freeing him from being a camel. Do not go about as a demagogue, encouraging triangles to break out of the prison of their three sides. If a triangle breaks out of its three sides, its life comes to a lamentable end. Somebody wrote a work called “The Loves of the Triangles”; I never read it, but I am sure that if triangles ever were loved, they were loved for being triangular. This is certainly the case with all artistic creation, which is in some ways the most decisive example of pure will. The artist loves his limitations: they constitute the thing he is doing. The painter is glad that the canvas is flat. The sculptor is glad that the clay is colourless.

The modern gender benders do want to free the tiger from his stripes, no matter how foolish that might be to even try. They want the triangle without its three legs or three inner angles. They want to pretend reality does not exist, and that their mere whims and wants can create reality.

The delusional world of the trans activists is just part of the larger world of delusion we find all over the West. Madness reigns. Of course who said that so much of modern thought is rational, or logical, or even based on reality? Chesterton goes on to show the futility of modern thinking – or aspects of it. One more largish quote is in order here:

But the new rebel is a Sceptic, and will not entirely trust anything. He has no loyalty; therefore he can never be really a revolutionist. And the fact that he doubts everything really gets in his way when he wants to denounce anything. For all denunciation implies a moral doctrine of some kind; and the modern revolutionist doubts not only the institution he denounces, but the doctrine by which he denounces it. Thus he writes one book complaining that imperial oppression insults the purity of women, and then he writes another book (about the sex problem) in which he insults it himself. He curses the Sultan because Christian girls lose their virginity, and then curses Mrs. Grundy because they keep it. As a politician, he will cry out that war is a waste of life, and then, as a philosopher, that all life is waste of time. A Russian pessimist will denounce a policeman for killing a peasant, and then prove by the highest philosophical principles that the peasant ought to have killed himself. A man denounces marriage as a lie, and then denounces aristocratic profligates for treating it as a lie. He calls a flag a bauble, and then blames the oppressors of Poland or Ireland because they take away that bauble. The man of this school goes first to a political meeting, where he complains that savages are treated as if they were beasts; then he takes his hat and umbrella and goes on to a scientific meeting, where he proves that they practically are beasts. In short, the modern revolutionist, being an infinite sceptic, is always engaged in undermining his own mines. In his book on politics he attacks men for trampling on morality; in his book on ethics he attacks morality for trampling on men. Therefore the modern man in revolt has become practically useless for all purposes of revolt. By rebelling against everything he has lost his right to rebel against anything.

OK, I may not have said all that much here on the transgender issue, but hey, any excuse will do to run with Chesterton one more time. And anything I can do to introduce others to the man and his writings is worth running with as well. Happy reading, and happy thinking!

13 Replies to “Chesterton, Reality and the Gender Benders”