The Christian religion is one in which books really matter. Reading and writing matter greatly to biblical Christianity. It is a bookish religion. Note, I did not say Christians are bookish. Sadly that is not true of most Christians today. But they should be, because Christianity at its core is bookish.

From its earliest days Christianity was all about writing, about books, about the public reading of books and letters, and so on. Sadly today far too many Christians are not readers or interested in books, including the 66 books found in the Bible. 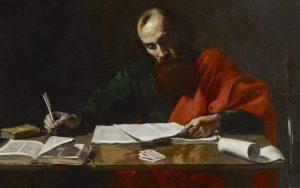 Thus most modern believers in the West are way out of sync with early Christianity. They prefer entertainment, emotion and imagery over solid content, especially as found in books. Let me make my point for the importance of books and reading in earliest Christianity by referring to two recent books which have made a solid case for this.

Both volumes are very significant books which overlap in many respects, and I actually alerted my readers to them in a piece I did a few weeks ago: billmuehlenberg.com/2018/06/08/so-what-are-you-reading-now/

Larry Hurtado’s book, Destroyer of the Gods, came out in 2016 (Baker), while Michael Kruger’s volume, Christianity at the Crossroads, appeared the following year (SPCK). Both books look carefully at the first few centuries of Christianity, with Kruger especially focusing on the second century of the church.

Hurtado examines the various distinctives of early Christianity and why it thrived. Chapter 4 is entitled “A ‘Bookish’ Religion”. He notes that unlike many other religions, sacred books are absolutely essential to Christianity. Certainly in light of Roman religions at the time, Christianity was a very “bookish” religion.

By that he means that “reading, writing, copying, and dissemination of texts had a major place—indeed, a prominence—in early Christianity that, except for ancient Jewish circles, was unusual for religious groups of the Roman era.”

Of course the early apostles said just that. As Paul put it in 1 Timothy 4:13, “Until I come, devote yourself to the public reading of Scripture, to preaching and to teaching.” Books, writing and reading were at the heart of the early faith as it spread.

And reading texts in corporate worship was a big part of this: “Indeed, the ancient practice of reading and discussing scripture texts became so much a part of early Christian corporate worship that it led in due course to the creation of manuscripts specifically prepared for liturgical usage, comprising an apparently new literary genre called the ‘lectionary’.”

Paul’s letters for example were read aloud to more than one congregation, and need for copies eventually developed. “Even within his lifetime, Paul’s letters were intended and functioned as written surrogates for his personal presence.” To see that these were seen as authoritative texts, recall that Peter referred to them as “scripture” (2 Peter 3:15-16).

This widespread emphasis on corporate reading and the like may well mean that folks back then were less illiterate than has been thought, argues Hurtado. And the bookishness of the early Christians was not just found in all the reading, “but also in the sheer volume of production of new Christian texts.”

Early Christians were actually quite prolific and they produced a widespread literary output. Considerable time and effort was required to compose and copy these texts. There were no printing presses or post offices back then, so “Christians had to invest their own personal and financial resources in disseminating their texts.”

He looks at other issues involved, and concludes: “These phenomena all combine to make the young Christian movement distinctively text orientated in the context of the varied religious environment of that time. In short, ‘textuality’ was central, and from the outset, early Christianity was, indeed, ‘a bookish religion’.”

Early on in Kruger’s 2017 volume he mentions that Hurtado’s book came out just as he was completing his, so he was not able to fully interact with it unfortunately. But he noted how much common ground was found in the two books. In chapter 6 of his book he also deals with this matter.

Called “A Textual Culture: The Literature of Second-Century Christianity,” it begins with these words: “One of the most notable features of early Christianity is that it was a religion concerned with books. Such a feature should come as no surprise, of course, given that Christianity was a movement with a deep Jewish heritage that itself was ‘bookish’ in nature.”

In addition to the Old Testament, soon “Christians began to write their own books. These writings covered a wide range of literary genres: historical narratives, letters, sermons, theological treatises, apologetic discourse and even apocalyptic and prophetic books. . . . These different sorts of writing played a central role in the life of the Church, whether in the context of public worship, private reading, or correspondence between congregations.”

He too looks at questions of literacy back then, and examines the making and copying of manuscripts. He says, “Given the significant role that written texts played within early Christianity, it is not surprising to discover that Christians exhibited a fairly well-developed and (at times) even sophisticated system of book production.”

He finishes his chapter with these words: “Contrary to portrayals of early Christianity as an exclusively oral religion or as having an oral culture, the evidence surveyed above suggests something very different. It suggests that from the beginning Christians had a distinctive textual identity that was rooted in its Jewish heritage and manifested in an impressive and voluminous production of new books.”

Too many believers prefer thrills and spills, and run on emotions and sensations. Using their minds for the glory of God via reading and writing is becoming a lost art for too many. Image over content reigns supreme in too many Christian circles, and too many churches specialise in entertainment and amusements, and a decided neglect of any serious and expositional preaching and teaching of Scripture.

That is a recipe for disaster, and why we see the church being in such a bad way today. Back in 2003 Arthur Hunt penned an important volume called The Vanishing Word (Crossway). In it he bemoaned the postmodern emphasis on image over content found in so much of Christendom.

Let me quote just two paragraphs from that book:

The devaluation of the word and its hostile supplanting by the image is a direct assault upon “the religion of the Book.” In accordance to this thought, we are all in danger of becoming pagans. Not just pagans, but mindless and defenseless pagans who would prefer to have someone tell us how to think and behave. The possibility of tyranny still exists for us today because we have lost the biblical and mental defenses to arm ourselves against demagoguery. Our children are not being equipped to spot counterfeit leaders who would lead us astray with an overabundance of pathos. Kenneth Burke told us that one reason we should study Hitler is to “discover what kind of medicine this mad-man has concocted, that we may know, with greater accuracy, exactly what to guard against, if we are to forestall the concocting of similar medicine in America.” I want to show in the following pages how Tomorrowland has the potential to become a total triumph for idolatry.

Paganism never really died in modern western culture; it was only restrained. American Protestantism effectively suppressed many pagan forms up until the twentieth century; but the advent of image-based media has brought forth a revitalization of the pagan gods in popular culture. Sex, violence, and celebrity, which are so pervasive in the media, conform to a pagan ideal. Ignoring history’s warnings of technology’s tendency to change us, we have blindly boarded a glitzy train with a one-way ticket to Digit City. Like Pinocchio, we are being hoodwinked into making a journey to Pleasure Island, and we could, quite possibly, share the same fate as those laughing donkeys.

Christianity is a bookish religion. It always has been. But contemporary believers in the West are in real danger of throwing their legacy away. That will spell not just the end of the Western church, but the West itself.

6 Replies to “Christianity Really Is Bookish”