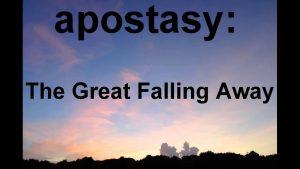 Plenty of believers are so fearful of offending anyone or getting involved in controversy that they are willing to abandon both orthodoxy and orthopraxis. That is, they are willing to jettison right belief and right behaviour in the interests of just getting along and not rocking the boat.

They hate – above all else – controversy. So they never open their mouths when the faith is under assault. But just earlier today I wrote all about this, so see more on this here: billmuehlenberg.com/2018/08/07/lets-hear-it-for-controversy/

With that sort of mindset so predominant in so many churches, no wonder apostasy is taking over. If folks do not even believe such a thing as apostasy exists, then this simply becomes fertile ground that allows all sorts of apostasy to spring up.

And we see this happening everywhere in the West. It is getting so bad that often we can no longer tell reality from fantasy. When I was younger I and many others used to enjoy reading a Christian humour and satire magazine called The Wittenburg Door.

It ran for almost four decades and made fun of a lot of stuff that deserved being made fun of. It took to heart the old saying of Chesterton: “That which is ridiculous deserves to be ridiculed.” Well, that magazine no longer exists, but it has been capably replaced by an online Christian satire site called The Babylon Bee.

Often it is hard to tell if a piece featured there is for real or not. With all this in mind, consider a very recent article that is making the rounds online. It would just have to be your classic send up from the BB. But the really mind-blowing thing is this: it is not – it is actually a true story!

The headline alone would qualify as a classic BB piece: “Pro-‘Gay’ ‘Church’ Sells Building, Plans to Open Brewery in New Facility, Donate Profits to Planned Parenthood”. Yes you read that right, and no, it is not a spoof, a satire piece, nor a send-up. It is reality biting us in the face.

The article begins this way:

The pro-homosexual Greater Purpose Community Church in California says that it has sold its former building and plans to open a public brewery in the now-closed Logos Bookstore in Santa Cruz. The brewery, which will also be used as meeting space for Sunday services, will donate part of the proceeds to Planned Parenthood, among other organizations.

“We decided to sell the building, because for us a church is a community and a movement,” leader Chris VanHall told NBC Bay Area. “It’s not brick and mortar.” The former building had a large homosexual rainbow flag unfurled outside, and members marched in the recent Pride Parade, according to the publication Good Times. VanHall also had a “Happy Pride Month” rainbow frame on his Facebook profile photo for the month of June.

While looking for a new place to gather, VanHall’s rental agent mentioned the former Logos Bookstore and signed a lease agreement with former Logos Owner John Livingston to use the space as both a meeting place for Greater Purpose and a brewery and eatery. “It’s more about community than anything,” Livingston told reporters. “I really like their approach.”

In the meantime, Greater Purpose is meeting in The Food Lounge, a restaurant and bar in the city. VanHall asked the owner of the lounge to keep the bar open, so members could have a beer while listening to his sermons. “We have a glass of beer, glass of wine, and it’s a comfortable atmosphere where people can not only listen to a progressive take on theology, but they can also engage in conversation,” he said.

“They can have one or two. As a matter of fact, if they have two, my sermon’s always better,” VanHall jested. He said that the former Logos Bookstore will be named the Greater Purpose Brewing Company. VanHall plans to revamp the location into space for manufacturing beer, mead and hard cider. The brewery will be open to the public, but on Sunday mornings, VanHall will use the facility for Sunday services before the brewery opens.

“We don’t want to dupe anyone. We don’t want to have this bar and, ‘Come on in and have a beer,’ and boom, you get a church service,” he explained. VanHall said that he also plans to split profits from the brewery and donate part of the proceeds to local non-profit organizations, such as Planned Parenthood, which has an office upstairs.
christiannews.net/2018/08/06/pro-gay-church-sells-building-plans-to-open-brewery-in-new-facility-donate-profits-to-planned-parenthood/

And yes, I have looked over the page carefully. Nowhere is there a little disclaimer saying this is just satire. Nowhere does it say ‘April Fool’s Day’. It seems that much of the article was taken from another piece: goodtimes.sc/santa-cruz-news/greater-purpose-brewing-company

Sure enough, I carefully checked out that article as well, and once again, there are no disclaimers about it being satire. So there you have it folks: apostasy in action. You do not get a much better example than this. This is about as far down the gurgler as you can get.

Of course we must take note that this “church” is fully into “progressive Christianity”. As I have documented before, whenever you see that phrase, you had better head for the hills, because hardcore apostasy will be the only outcome: billmuehlenberg.com/2011/01/23/progressive-christianity/

There is nothing progressive about denying the basics of the Christian faith. That is simply regression. That is simply apostasy. And here you have it all in one happy package: a beer-guzzling congregation promoting homosexuality and baby killing, all the while deceiving themselves into thinking they are somehow Christians and somehow pleasing the Lord.

Talk about deception deluxe. Talk about apostasy abounding. It is the bitter, deadly fruit of an apostate church. And it is all part of a culture – and so much of the church – that no longer believes in truth. Lord have mercy.

11 Replies to “The Deadly Fruit of Apostasy”