I don’t know about you, but I often find in my Christian walk that a number of related things will come together all in a very short period of time, serving to confirm a spiritual truth or underline some biblical reality. This has just happened to me again over the past few days.

Now if I were simply Joe Pagan, I might just put all this down to mere coincidence. But because I am a Christian I believe it is in fact a God thing. The particular point that kept cropping up of late had to do with the twin spiritual truths of being faithful in the little things, and not worrying about whether we are impacting the masses.

The classic verse on the first one is of course Luke 16:10 in which Jesus said, “He who is faithful in a very little is faithful also in much”. The main thing is to be faithful, even if it seems to be just a very small and inconsequential matter. 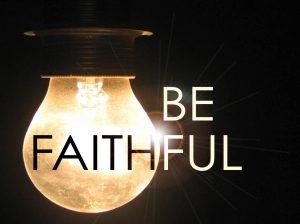 Let me tie these two things together with a bit of my own personal story. I can often question whether I really am doing all that much good for Christ and the Kingdom. I sometimes wonder if there is much good fruit coming out of the work of CultureWatch and all the rest that I do.

I often think that my influence is not very great and I am not reaching many people. So I will go to the Lord and offer back to him the ministry I am involved in. I tell him that if he wants me to stop what I am doing and/or do something else, I am willing to do so.

And the sense I get of what the Lord seems to say to me in reply is this: ‘Don’t worry about the numbers, but just be faithful in what I called you to do. Even if only a few people are touched, blessed and encouraged because of your work, that is sufficient.’

With this as a backdrop, let me mention the various things that seem to have dovetailed over the past few days, all to emphasise these truths. Yesterday a Christian leader and book publisher who I had not met before wanted to catch up with me, so I suggested Koorong (hmm,.. a bookstore – how convenient. And I came away from there with only seven new books!).

He was eager to catch up and share some thoughts as he found me to be on the same page as he was. So we had a good time together. When he asked about the extent of the outreach of my ministry, I said there are things that can monitor one’s web traffic and so on, and that the numbers were good and holding steady – but not really rising.

He was impressed with the numbers. I said for a small-fry outfit like mine they are probably not bad, but they are nowhere near the big boys. But he mentioned how helpful some of my earlier books had been, along with my website. He mentioned others who were also blessed by my ministry. So all that was very encouraging indeed and gave me some hope!

As to numbers, I had just been sharing on the social media and elsewhere a terrific quote I had found from Spurgeon. He had said this: “Long ago I ceased to count heads. Truth is usually in the minority in this evil world. I have faith in the Lord Jesus for myself – a faith burned into me as with a hot iron. I thank God, what I believe I shall believe, even if I believe it alone”.

Yes quite so. If some New Age fraud like Oprah Winfrey came to town, she would easily fill an auditorium of 25,000 people five nights a week. Numbers in themselves mean nothing. People who like to have their ears tickled will always flock to the false prophets and teachers, while ignoring the true ones.

Two other experiences from yesterday also confirmed these two truths I have been talking about. Last night I read a chapter about the ‘discipline of perseverance’ in R. Kent Hughes’ excellent book, Disciplines of a Godly Man in preparation for my men’s group today.

Once again, the emphasis was on being faithful and persevering, regardless of what others may do. Also, last night I was looking up something in vol. 1 of Lloyd-Jones’ magisterial 14-volume expository commentary on Romans. After I found what I was looking for, I flicked through some other pages in the book.

I came upon a terrific story that he shared. While commenting on Romans 1:14-15 where Paul says he is a debtor to all men to preach the gospel, the Doctor spoke about a holiday he took in the country with his wife. The pastor there was elderly, it was a hot day, and he had three sermons to give. So Lloyd-Jones kindly offered to take the afternoon service. As he got into the pulpit he saw his wife and just five other people. He then says this:

Let me admit it quite frankly and honestly, the devil came to me and tempted me, and he did so in this way. ‘Well, of course, with only five people – just give them a little talk!’ Quite apart from the fact that I am not good at that kind of thing, I recovered myself, and this is what I said to myself: If you cannot preach to these five people in exactly the same way as you preached last Sunday in Westminster Chapel, the sooner you get out of the pulpit the better! By the grace of God I was enabled to do so, and I have never enjoyed a service more in the whole of my life! The preacher who is dependent upon his congregation is unfit to enter the pulpit. (p. 253)

Wow, great stuff. And this again made me think of my own ministry and the few that seem to benefit from it. The truth is, if only five people get saved and discipled because of what I am involved in, it is sufficient. I may never reach the masses. I may never have zillions of followers. I may never have a terrific impact in cyberspace and elsewhere.

But if I am doing what God has called me to do, and doing it faithfully, that is enough. And let me mention one more incident which has again tied all this together. Just this morning I had a mother tell me on the social media that her seven-year-old son is asking all sorts of hardcore theological questions.

She said she has been using my site to get some answers for his curly questions. I thought that was pretty neat. If I only exist to help a mum help her young child to learn more about the faith, that is enough. We must be thankful for small blessings. We must resist the false belief that bigger is always better.

We must resist the siren call to have more and more people in our orbit of ministry. While far too many pastors and church leaders are craving to have their flock become the next big thing – the next big megachurch – God is much more concerned with us being faithful in the little things.

If our congregation never numbers more than 50, but those 50 are being fed, are growing, are maturing in Christ, are full of love for God and others, it is enough. Forget the deceptive dreams about having a massive outreach and a massive auditorium to house your kazillions of church folks.

30 Replies to “Forget About the Numbers: Being Faithful in Little Things”