Erroneous what? Well, since you asked…. To extrapolate means to “extend the application of (a method or conclusion) to an unknown situation by assuming that existing trends will continue or similar methods will be applicable” as one online definition of the verb puts it.

Let me make that a tad simpler for you. A common error that is made too often by too many is to take one’s personal experience and universalise it, to extrapolate it, to assume it is true for everyone, everywhere. I get this all the time as I discuss and debate various issues with others.

Examples are many. For example, a person may have had a bad experience while a youngster in a church, so he or she will assume that all churches are bad and everyone has had the same bad experiences. This is often a common excuse made by angry atheists for example. They take their bad experience and erroneously universalise it. 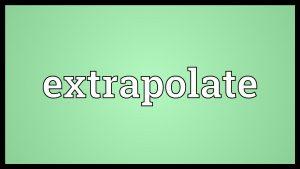 Or take another example. I might have written on some very real dangers of creeping sharia and stealth jihad. Yet someone will write in and object. They will say they know a few Muslims and they are wonderful, friendly people who would never harm a fly. Um, yeah, but….

There are more than a few Muslims on the planet. Just because you know a few nice ones does NOT mean there are no not-so-nice ones. Sadly plenty of devout Muslims are more than happy to kill for their faith, and to help rid the world of “infidels”. So extrapolating from your own personal experience is really not all that helpful here.

Plenty of similar cases of this occur all the time. You might have warned about the dangers of the radical homosexual agenda and the like. But then someone comes back to you and says they have a few homosexual friends and they are such nice people who are not trying to destroy society.

Again, sure, there are folks like that. But that is not the point. There are in fact militant groups of sexual radicals who really dislike traditional marriage and family, and do have their sights set on overhauling society and recreating it in their own image. The fact that not every homosexual is involved in this or supportive of it is beside the point.

Take one more example of this. I or others may have sought to make the case against legalised euthanasia, and for palliative care. But invariably someone will come up with some horror story about how their uncle suffered a lot while dying, and therefore we must have the right to euthanasia.

While we can all feel sympathy for anyone with any degree of suffering, it is simply amiss to take a particular hard case where palliative care was perhaps only moderately successful and extrapolate from that, claiming everyone suffers horribly, palliative care just does not work, and we must have euthanasia legalised.

Related to this, I often find that some folks will get all bent out of shape, emotionally reacting to something I have written. Never mind that I have offered a heap of facts and figures, and laid out the various lines of evidence – they will simply emote and reject it all, because their own personal experience does not seem to line up with it.

They will say, ‘Yeah, but….,” and go on and on about how their particular life situation somehow refutes all the evidence I presented and nullifies all the data I discussed. Usually they are just offering a kneejerk reaction instead of actually interacting with the data I have provided.

A classic example of this happened just recently. A few days ago a mother sent in a comment to a piece I had written four years ago on “Daughters and Their Dads: The Vital Relationship”. In it I summarised a mountain of research and social science studies that demonstrate the very important role fathers play in the wellbeing of their daughters’ lives.
billmuehlenberg.com/2014/08/27/daughters-and-their-dads-the-vital-relationship/

The data is quite clear as to the need for dads in the lives of daughters. Yet this mother was all upset, and sought to defend herself, saying her daughter is just fine, even though raised in a single-parent home. Here is the comment she sent in:

When a father is or becomes a deadbeat and doesn’t want to be married much less a dad, some women, myself included, have stepped up to fulfill a daughter’s needs. I raised my daughter – met her needs, instilled confidence, and she knows love. I have never had the many negative aspects written in this article and believe it is unfair profile. My daughter is a college graduate, has a good job, and recently married at 23 to a great young man. No drug, alcohol or sexual abuse. I raised a fun and happy child and we surrounded ourselves with family and other positive people.
Being fatherless is not the kiss of death you relate it to be. Her deadbeat father missed out on a wonderful child. She knows her worth and does not let his poor choices define her. Nor will this presumptive, negative summary. A concise article would present all outcomes, not just the negative one.

This is how I replied to her:

Thanks ____. It is good to hear that your daughter is doing well. But sadly you have really missed the point here. In fact, you have committed a number of errors. One, you simply extrapolate from your personal experience as if that is the last word on all this. But that is not how we establish the truth of something.

That is no more helpful than having a 90-year-old man who has smoked three packs of cigarettes a day for the past 75 years telling us that there is obviously nothing wrong with tobacco, and we can just ignore all the studies to the contrary.

Yes there will be the odd exception, but we must look at the overall picture. The same here: the research is quite clear as I said in the article: for the most part and for most people, children do best when raised in married two-parent households. Of course there are exceptions, but exceptions do NOT make the rule.

Also, when you compare apples with oranges it is never very fair of course. We all know of bad dads – and bad moms. If you had a deadbeat, no-good husband, then sure, chances are good that raising a child alone may have to be the preferred way to go.

Lastly, you of course simply chose to ignore all the research and evidence offered here. You provide not one fact, study or bit of research to refute any of these numerous studies. All you do is take your own experience, assuming that it, and it alone, trumps all this research. That is not a good way to determine the truth about something!

It is one thing if a husband dies, or walks, and we seek to do all we can to help the widow and her children. It is quite a different matter to deliberately bring a child into the world outside of an intact two-parent household. That was a main point of my article of course.

And most honest single parents I am aware of have said that yes, the ideal is to have both parents around. That is always the desired way to go, but sometimes life does not always work out that way. So well done at being a good mother. But ask any child raised in a single-parent home and overwhelmingly they will say they really wished they could have had both a mom and a dad around, when and where possible.

As mentioned, this is quite common to find this happening, especially in the culture wars. You present a well-reasoned and fact-filled case for something, but various people will get all upset, believing that their particular story somehow negates everything you have said, or rebuts all the evidence you have presented.

So beware of the erroneous extrapolater!

6 Replies to “On Erroneous Extrapolating”