Yesterday I warned about the dangers of people extrapolating from their own personal experiences, making them binding, and allowing them to trump everything else, including all the facts and evidence. Some people will ignore the data and research, and simply assume that their particular experience is normative for everyone everywhere.

They universalise their experiences and make them the test of truth. As I sought to demonstrate, that can be a very unhelpful way to proceed: billmuehlenberg.com/2018/08/21/on-erroneous-extrapolating/

In that piece I mainly used examples from the culture wars, and looked at how many non-Christians are guilty of this. But on the social media someone asked if Christians can also be guilty of this. I replied, ‘Yes of course’. So here is a look at how believers can also fall into this unhelpful practice. 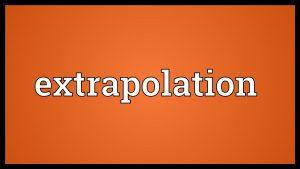 Let me discuss this by once again mentioning the need for biblical balance. Going to extremes can lead to some real problems for the Christian in this area. One danger is to push for a cookie-cutter type of Christianity, where everyone is expected to conform to your life, your experiences, and your emphases.

The other danger is to so emphasise our differences and diversity that there is no commonality at all. Let me explain both of these in turn. First, many Christians wrongly extrapolate from their own personal experiences, expecting every other Christian to be the same or do the same.

Examples of this would be legion, and we have all encountered this. For example, a believer may have had a particular experience of God – or what he thinks is an encounter with God – and then he expects all other Christians to also have that same experience. And if they don’t, they are seen as sub-standard Christians.

Or a believer may have a strong call to go to Bible college or seminary to get some hardcore training in theology or apologetics. That is fine. But if they then think every other Christian should do the same, they are wrongly extrapolating from what God has called them to do.

Sure, I often urge believers to read more, to study more, to take theology much more seriously, and so on. But I do not expect everyone to do the same thing I am doing. Yes by all means do take time to read and study, but my calling will quite likely not be the same as yours.

One more example. God may prompt you to do something, or maybe to give up something. He may lead you to fast for a week or abstain from the social media for a while. Again, great, and make sure you do what you sense God is calling you to do. But don’t insist that this is what every other believer must do, as God may not be leading them in those directions at that time.

The truth is, we are all different, and God deals with all of us in different ways – at least to an extent. In one sense, yes, we are all on a journey. We are all at different places with God. And the Lord graciously deals with us where we are at.

We need to give room for others and their particular growth and development. We must avoid putting all believers in a box, and we must especially avoid thinking that every other believer should be just like ourselves. God graciously deals with each one of his children as unique individuals, and we should do the same.

But that leads to my second potential error. We can so stress our uniqueness as individual Christians and so emphasise our differences, that we can end up with no common ground at all, and/or we can end up with no way to reprove or exhort another believer, since they will simply reply, ‘this is the journey I am on – it is between me and God’.

That is the other extreme to avoid. And the examples of this would be apparent. A Christian might be hovering on the edges of sexual impropriety, or clearly engaged in wrong – sinful – sexual behaviour. If you seek to point this out to him, warn him about it, and lovingly tell him to stop, he may foolishly say things like, ‘God has not convicted me of that.’ Or, ‘This is where I am at with God – you can’t judge me.’

Um, yes we can judge that person. Sure, we are all on somewhat different routes with our walk with God, but there are always clear boundaries for all of us nonetheless. We cannot use our uniqueness as a Christian to become a cheap excuse for sin.

So in that sense if a new Christian is flirting with fornication, I don’t have to wait till he has been a believer for decades before I can warn him about that, and if need be, rebuke him. Some things are clearly wrong for all believers for all times, and pushing the ‘different journeys’ bit just does not cut it here.

So, are there absolutes for the believer? Of course. The Bible is full of them. There are plenty of commands and exhortations and rights and wrongs that apply to every single one of us. But there is also room to move, certainly in areas which are not sinful in themselves.

Thus some believers may feel very strongly about not drinking alcohol, and good for them. However, what can become a real problem is when those believers insist that everyone else do exactly the same, and they start judging and looking down on their brothers and sisters if they do not follow suit with their teetotalism.

There are many secondary issues like this in which we really must show Christian grace, and allow for Christian freedom. Some folks feel real comfortable in raising their arms in worship while others do not. Neither one should judge the other in this. Each one is accountable to God in these areas.

Of course here we are talking about matters where there is genuine room to move, and Paul himself wrote about this often. Consider just one passage, Romans 14:1-10:

One person esteems one day as better than another, while another esteems all days alike. Each one should be fully convinced in his own mind. The one who observes the day, observes it in honor of the Lord. The one who eats, eats in honor of the Lord, since he gives thanks to God, while the one who abstains, abstains in honor of the Lord and gives thanks to God. For none of us lives to himself, and none of us dies to himself. For if we live, we live to the Lord, and if we die, we die to the Lord. So then, whether we live or whether we die, we are the Lord’s. For to this end Christ died and lived again, that he might be Lord both of the dead and of the living. Why do you pass judgment on your brother? Or you, why do you despise your brother?

3 Replies to “On Erroneous Christian Extrapolation”