Australia has a new Prime Minister – its 30th. He is 50-year-old Scott Morrison from Sydney. After no small amount of political intrigue over the past few days, he is now our new leader, and Turnbull is out. How long Morrison will last however remains to be seen.

There was a leadership spill with three Liberals putting up their hands for the top job: Peter Dutton, Scott Morrison and Julie Bishop. The initial spill motion was carried 45 to 40. Bishop lost in the first round of votes. The second round of voting went narrowly to Morrison. He received 45 votes while Dutton received 40.

How might a Christian assess this change of leadership? Well, I just returned from a radio station where I did a 45-minute interview with the Christian Vision Radio network. We talked about these very matters. Of course that was before the results of this spill were known. 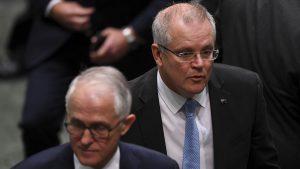 But what I said there is pretty much what I can now say here, knowing the outcome. I made several broad points. One, politics cannot save. Yes politics is important, and yes getting someone other than Turnbull to lead the conservative party and the nation is welcome. But at the end of the day politics will never be the ultimate panacea.

There is only one person who can make Australia or any other nation great again, and he is not running for office. Yes, God has established government, and yes righteousness exalts a nation. So getting good people into office is an important matter indeed.

But in a fallen world in which the sin problem is far bigger than any political solution, a new leader can only go so far and do so much. Dutton was the most conservative of the four. Turnbull had never been a conservative; Julie Bishop was in the same mould; and Scott Morrison, while an evangelical Christian, has been fairly moderate over the past few years. He did speak against homosexual marriage – but abstained when it came time for a vote.

Dutton’s most conservative credentials of late had been centred on his strong stance on immigration and border protection. He was also opposed to homosexual marriage. However, while immigration minister in 2015 Dutton cancelled the visa of the US anti-abortion activist Troy Newman who was due to give some talks here. So he had been a bit of a mixed conservative bag.

But a more moderate Morrison has got the top job. However, Turnbull has said he will quit, thus meaning a Wentworth byelection could end the Liberal party’s narrow one-seat majority. So Morrison may not long last if a general election is held, and Labor wins. So again, things are up in the air.

A second point I made in my interview is the need to see the big picture and the long term. Australia as a nation – just like all of the West – is in a real bad way. A leadership change will not greatly impact on the major problems this nation is experiencing.

And the main problems are not political – they are spiritual. As long as sin and unrighteousness reign, and our spiritual health continues to spiral downwards, no political leader is going to be able to do much to turn the decline round. At best, there will be a temporary fix, but certainly not a long-term solution.

A Morrison government will thus be simply a reprieve – a much needed reprieve of course, but nothing more. Even if he has a lot of good solid conservative ideals and vision that he wants to promote, the Liberal Party as a whole has so much small-l liberalism infecting it, that it is doubtful that he will be able to achieve very much.

Sure, had someone like Morrison or Abbott or Dutton been around last year as leader instead of Turnbull, perhaps the madcap push for homosexual marriage would have been slowed if not thwarted. So there is certainly a place for more-or-less conservative leadership. But as is so often said, politics flows downstream from culture.

As long as we have a toxic, ungodly, secular-left culture, our political scene will for the most part reflect that. As I said, the bigger fix, including the culture, and more importantly, the spiritual fix, are not on the agenda for most folks, so they will put all their faith in politics – a leaky vessel indeed.

Another point worth making is the fact that while a lot of turmoil and upheaval of late may suggest massive political instability, compared to many other countries, Australia is not doing so bad. I mentioned in my interview that since WWII, Italy has gone through over 60 changes in government.

That is almost one a year. So in comparison we are not doing quite so bad. But when we rightly condemned Labor for its rotating leadership, its knifing of leaders, and its lack of stability, we are now seeing much the same with the Liberals.

All this infighting and instability does not help the nation very much. Again, I am more than pleased to see Turnbull gone, and I am glad another leader has taken over. It remains to be seen of course how he performs. If he simply wants to keep everyone happy and not rock the boat he will not be all that much better than Turnbull.

Obviously the left of politics, and our leftist media, will be opposed to him anyway. They will do all they can to resist him, and the fake-news will simply continue to spin out of control. Things are going to get very rocky indeed, so hold on to your hats.

As to more practical concerns, our new Deputy Leader is 47-year-old Josh Frydenberg from Melbourne. We all knew Julie Bishop would not want to be second in command any longer. So this is our new leadership pair. A few other items remain, including, as mentioned, a possible byelection.

If a byelection is soon to be held in Wentworth, there is already talk about having Tony Abbott’s sister and lesbian activist Christine Forster run for the position. While that electorate may not be the most conservative of places, a lesbian leftist is NOT what the Libs need – now or ever.

As always, we are told to pray for those who rule over us. We must indeed pray for Morrison and Frydenberg. They will need a whole lot of divine protection and direction, especially given all the political hostility they will be facing.