One thing CultureWatch is all about is letting people know that change is possible. The main change of course being promoted here is that of leaving behind a selfish and sinful life, and becoming a follower of Jesus Christ. Then those who once hated and cursed God can become those who share his love, life and truth to all who will listen.

That change happened to me many years ago, and now my main aim in life is to tell others about this terrific good news. And that I have now been doing for nearly 50 years. And it all springs from a momentous change that I underwent when just 18 years old.

In that transformation I moved from darkness to light, from death to life, from Satan to Christ. Along with it went some other changes: intellectual, political, ideological, and so on. I moved from being a fairly hard-core leftist and radical to being much more conservative.

All those changes are recounted in the story of my conversion that occurred back in 1971. You can see all the details here: billmuehlenberg.com/2012/06/27/coming-home-my-testimony-part-1/ 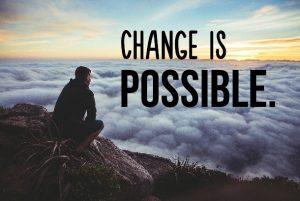 These changes are a good part of the reason why CultureWatch exists and has been running for twelve years. I now want others to experience similar sorts of changes that I have. Thus this article, and the other 4504 pieces found on my website.

This site is supplemented by an active ministry utilising the social media, speaking and teaching engagements, and so on. Taken together, this is about seeking to see others changed. And that has happened. Some people have become Christians through this ministry, some have been discipled, and some have had a change of view, at least in political and social areas.

Needless to say, the changes I most hope others will come to know overwhelmingly entail finding forgiveness, cleansing, deliverance and new life in Christ. But I also seek change in other areas, as the subject headings on my site make clear.

Persistence is crucial here, since plenty of resistance, opposition and hostility will come your way when you seek to do things like this. And I guess you can say that I have had my fair share of abuse over the years. All sorts of hate mail, abuse, and angry comments, etc, are normal fare here, along with the occasional death threats.

Quite irate and vitriolic attacks, insults and name-calling are all part of what I get on a regular basis. It is not fun, I must say. I am a human being after all, and the constant stream of really nasty and hateful abuse and mudslinging is not all that enjoyable.

In fact, over the years there have even been various websites set up devoted to the sole purpose of attacking, mocking, vilifying and lying about me. There have even been Wikipedia pages set up to attack me over the years. Dare to stand up for Christian truth and take on the militant secular left and that will be par for the course – it is to be expected. It is simply part of the job description.

The very constant, emotionally-charged and shrill opposition and attacks are among the main reasons why so many people will never speak out, even though they should. They fear all the hate, hostility and angry responses, so they prefer keeping their mouths shut.

We will win no battles that way. Indeed, we will keep losing more and more battles as we cower in fear and as we prefer a peaceful and quiet life to taking a stand for what really matters. I wrote yesterday about how adult activists are grooming our children in our schools, and how this makes my blood boil.

It should make all of us incensed at this sort of child abuse. But why are so few speaking out about this? Why is hardly anyone showing any concern? Why do we not have mass marches on the streets, demanding an end to all this? Where are all the Christians and conservatives when you really need them?

As I say, nonstop hatred and abuse deters many, and it sure ain’t pleasant. But it is what we must be willing to put up with if we care enough about our children, our values, our faith, and our freedom. And we must also keep in mind that some folks can and do change.

As mentioned, some folks have become believers through the efforts of this ministry, and many have hopefully grown in their faith. And some of those on the hard left have had a change of heart as well. Let me share one example of this recently happening.

There was one fellow in the UK who really seemed to seriously hate me and detest everything I stood for. He not only sent in countless comments to my website full of the most foul, vile and ugly material imaginable, but he became so incensed with me that he set up a website to attack me full time.

Not being a masochist, I have tended to avoid all these sites. I do not need to expose myself to so much diabolical hatred and enmity. So I am not sure if I ever actually went into his site to see all the juicy offerings on display. And I am not sure how many angry and abusive comments he sent to my site.

I have to moderate every single comment that comes to CultureWatch. There are 65,000 comments that have been posted so far, and who knows how many that were sent straight to the bin. Maybe 15,000 all up? It is hard to know for sure. So this fellow’s comments, like those of other trolls, went right into my trash can – at least at first.

But some years ago – for some reason – I decided to save as a Word document the regular comments from the trolls. It is now a rather large document, with small font size, featuring plenty of nasty and foul comments that never made it onto my website. And I have dozens from this fellow from the UK.

Not too long ago I got another comment from this guy. When I saw his name I thought, “Oh no, here we go again!”. But I was pleasantly surprised when I read his words. He actually said he has had a change of heart, will send no more comments in, and has taken down his website!

Wow. As mentioned, I am not a glutton for punishment, so I do not know exactly what was found there. If you google my name you still see his site, with the introductory words, “Bill Muehlenberg: Bullying and lying for Jesus. Bigot, Christian fundamentalist and liar. This blog is to expose his vile campaign of hatred and …”

But if you now click on the site all you get are these words: “Blog has been removed – Sorry, the blog at bigotedbillmuehlenberg.blogspot.com has been removed.” So I guess it really has been taken down. And this is what he said in his comment:

Hi Bill,
I have deleted my blog about you. After a lot of soul-searching I have come to realise that the left is incredibly destructive, that most gay men are driven entirely by narcissism and appetite, that Islam is intolerant and a huge societal problem, and that socialism leads to hell on Earth.
I don’t agree with a lot of what you say but I’m past caring. I’ve found a way out of the sheer demonic self-righteous rage of the left, and am happier and healthier for it.
What do you know – you were right about a lot of stuff all along. Funny old life.
I won’t comment again. Wishing you good health and happiness.
****** *****.
Yahoo.UK

Wow again. That is a very revealing comment indeed. Notice the adjectives he uses to describe what he and others are/were into: destructive, demonic, narcissistic. That is usually how I describe such folks of the militant secular left. Now this guy is using the same terms and describing where he was at.

So he has had a pretty major change of heart and mind it seems. It does not appear that he has gone the whole way, and become a Christian. He likely would have told me that if he had. But it is a good start indeed. At least it means I will have one less site and one less batch of comments to have to deal with.

If this fellow is reading this post, he needs to know that now, like before, I am praying for him. When he sent in his vile and acerbic comments in the past, I prayed for him. And now I continue to pray for him. It is terrific that he has seen some light. Now I pray he sees all the light, and comes to find forgiveness and redemption in Christ.

This fellow is a good example that change is indeed possible. How much of his current change was due to the prayers of myself and others may not be known in this lifetime. But change can happen, and Sauls can become Pauls. And angry misotheists can leave such ‘destructive, demonic, narcissism’ behind.

And best yet, for those who open themselves to it, they can change from being enemies of God and objects of his just wrath to children of God and part of the beloved. Please join with me in praying for my former persecutor. It would be terrific to see him make a complete and lasting change through Christ.

As the Apostle Paul – himself once a major persecutor of Christians – put it, “Therefore, if anyone is in Christ, he is a new creation. The old has passed away; behold, the new has come” (2 Corinthians 5:17). And I am not the only one to encounter such encouraging change.

When I shared this story on the social media, one gal sent in this comment:

I’ve had three atheists that over a decade ago angrily blocked and deleted me after calling me many names, falsely accusing me and railing on me, come back recently, apologizing and wanting me back in their lives! Two retain their atheist status, the third said that not only had I inspired him (we argued till we were blue in the face, in the past!), but that there were also some things that happened in his life that have caused him to reconsider atheism. He is no longer an atheist. However, he doesn’t profess Jesus Christ, yet! His atheist/agnostic girlfriend recently contacted me to ask me to PRAY for him–he’s going through some tough times! You just never know where the Holy Spirit is working!

15 Replies to “Yes, Change Is Possible”