Some folks consider this to be a difficult passage, mainly because they think it paints Jesus in such a bad light. Critics, non-Christians, and atheists especially will say that Jesus is being quite unloving, harsh, lacking in compassion and brusque here – and unnecessarily so.

Jesus is supposed to only be loving and accepting – or so they claim – so the Jesus we find here is just another easily-irritated human, not the Son of God. In addition, the critics – or those who have not thought things through here very carefully – also claim Jesus seems to be driving away would-be disciples.

Many folks think Jesus welcomes – or should welcome – everyone equally, and he would never cast anyone away. Well, this passage makes it clear that Jesus does indeed make it hard on those who would follow him, but this is not being harsh or hard-hearted. It is simply part and parcel of the way Jesus shared the gospel: he made it difficult for people, because he insisted on stressing the radical call of discipleship.

Now, we could really call it quits here, since what I just said seems sufficient to explain this passage. But it is worth looking at it in a bit more detail, including drawing into the discussion various experts along the way. So just what is the passage that we are dealing with here? It is this: 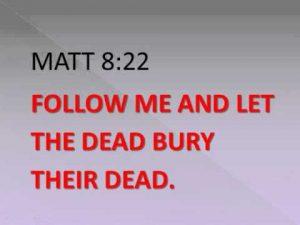 So here we have two would-be disciples whom Jesus seems to just brush off, or at least not treat all that politely. But was he really just being thuggish, a bully, uncaring? It seems his replies make it clear that he is simply emphasising something he often said: becoming his disciple will be no picnic.

It will cost a person everything. And it will mean they will become hated by the world, just as the world hated him. Indeed, just two chapters later we find clear and forceful warnings about persecution to come (see Matt. 10:16-25). Given the very real dangers facing his disciples, including death (10:21), we can actually thank Jesus for making things difficult for potential disciples.

All this is not a game. Following Christ can well cost you your life, so we dare not be glib about this. The demands of Jesus are always hardcore and uncompromising. So Jesus was being kind to these folks by giving them such a strong word and laying out clearly what was required of them.

But let me draw in a few commentators here, to further explain what is going on in this passage. As to the scribe, he may have been like many folks: excited about the miracles and attractions of this new prophet, but not at all taking out the time to consider just what is involved in discipleship. Donald Hagner comments:

Because Jesus expands the scribe’s concept of following by referring to discipleship in terms of a kind of urgent wandering, and homeless ministry, his answer may well have surprised the scribe. Jesus means that life for him and the disciples who do follow him will be a matter of rigorous and self-denying living. . . . Discipleship for Jesus, like the related call to righteousness (cf. the Sermon on the Mount), is an all or nothing matter.

Concerning the second potential recruit, there might appear to be more reason here to be concerned about the supposed harshness of Jesus. After all, in the Jewish culture of the day family loyalty was important, and things like burial were seen as being quite significant. But Jesus will again insist on the radical requirements of discipleship.

The kingdom of heaven apparently involves a degree of fanaticism which is willing to disrupt the normal rhythms of social life. Jesus can hardly have been surprised that true discipleship remained a minority movement, and that popular enthusiasm for His teaching and healing generally stopped short of full discipleship. Many are invited but few are chosen (Matt. 20:16; 22:14; cf. 7:14).

And commentators point out that the situation here may not have been that the father has already died, but that he may be near death. Either way, Jesus makes the claims of the kingdom paramount, and urges the man to get his priorities right.

In both cases these men were not in a proper place to seek to follow Jesus. If the first was overeager, the second was undereager. Or as Grant Osborne puts it, “The first promises too much (what he cannot deliver) while the second promises too little (what he does not want to sacrifice).”

Both were not the ‘right stuff’ to be a disciple of Jesus. Both did not grasp what Jesus demanded of those who would follow him. Daniel Doriani rightly says: “Jesus’ goal is clear enough. He wants to state his standards for discipleship. By so doing, he separates the pretenders from the contenders. He probes them and us, searching to see if we are ready to be his disciples, ready to heed his call and meet his standards.”

And again, there is great wisdom in laying down such strict conditions of discipleship. The church needs to learn this lesson as well. We tend to want to accept anyone, anywhere, anytime, no questions asked. We must be just a prudent and discerning as Jesus was, and be just as hard on those who claim to want to follow Jesus.

As D. A. Carson rightly reminds us: “Little has done more to harm the witness of the Christian church than the practice of filling its ranks with every volunteer who is willing to make a little profession, talk fluently of experience, but display little of perseverance.”

Yes, quite so. The sad truth is, many of our churches today are filled with people who are not real disciples of Jesus at all. They are pretenders, going through the motions, but have never had a life-changing encounter with the living Christ.

That in large measure explains why so much of the church in the West today is ineffective, lifeless, salt-less, and irrelevant. Worldlings line the pews, thinking they are born-again believers, when they are not. And much of this is due to our pastors and church leaders who do not know how to evangelise and make disciples.

They are interested only in numbers, not real disciples. That is always a recipe for disaster, and we see that being played out all around us. It is time to get back to the methods and words of Jesus – no matter how harsh and jarring they may seem.

The wellbeing of the church and the eternal destiny of millions is at risk. We dare not get this wrong.