There is no more important question that any of us can ask than this: Do I have a real knowledge of God? This means not just head knowledge, but personal, heart-felt knowledge based on a relationship with the living God. Another way of asking this, and perhaps a more important way, is to ask if God really knows us.

I just read again in my morning reading some of the most shocking words in all of Scripture. In Luke 13:22-30 we read about the “narrow way”. A person had just asked Jesus, “Lord, are there few who are saved?” and he replied with a parable. In verses 24-28 we get his ominous words:

Strive to enter through the narrow gate, for many, I say to you, will seek to enter and will not be able. When once the Master of the house has risen up and shut the door, and you begin to stand outside and knock at the door, saying, ‘Lord, Lord, open for us,’ and He will answer and say to you, ‘I do not know you, where you are from,’ then you will begin to say, ‘We ate and drank in Your presence, and You taught in our streets.’ But He will say, ‘I tell you I do not know you, where you are from. Depart from Me, all you workers of iniquity.’ There will be weeping and gnashing of teeth, when you see Abraham and Isaac and Jacob and all the prophets in the kingdom of God, and yourselves thrust out. 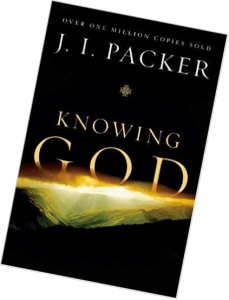 We also find these words in Matthew 7:21-23. Wow: ‘I never knew you.’ No one should ever want to hear those words. Yet if the gate is indeed narrow, and many seek to enter but are not able to, then we have to say with tears that most folks WILL one day hear those stark words.

Thus we should be doing all we can right now to make sure this will not be true of us. We must seek above all else to know him, and to be known by him. I also read this morning what Jesus said about the cost of discipleship, and being willing to leave everything to follow him (Luke 14:25-33).

I emphasise all this because I saw a friend on the social media today mention she has discovered a terrific book. And it certainly is. In 1973 Knowing God by J. I. Packer was published. It has become a best seller. Most people were pleasantly surprised that a book on theology became such a widely-received and oft-reprinted volume.

While written in a popular style for a broad, non-academic audience, the book is filled with deep theology and rich biblical truth. It looks at who God is and discusses the divine attributes. He has meaty chapters on who God really is, including decidedly unpopular topics today such as the wrath of God, the jealous God, and the God who judges.

The first three chapters are introductory. In ch.1 he quotes a very young Spurgeon:

The highest science, the loftiest speculation, the mightiest philosophy, which can ever engage the attention of a child of God, is the name, the nature, the person, the work, the doings, and the existence of the great God whom he calls his Father. There is something exceedingly improving to the mind in a contemplation of the Divinity. It is a subject so vast, that all our thoughts are lost in its immensity; so deep, that our pride is drowned in its infinity.

Spurgeon said this in a sermon when he was just 20 years old! And in Ch. 2 Packer reminds us that “one can know a great deal about God without much knowledge of Him.” Yes quite so. In the same chapter, “The People who Know their God,” he examines evidence of knowing God. He offers four points, based on the book of Daniel. Let me offer highlights from these four propositions:

1) Those who know God have great energy for God.
In one of the prophetic chapters of Daniel we read: ‘the people that know their God shall be strong, and do exploits’ (11:32)…. This shows us that the action taken by those who know God is their reaction to the anti-God trends which they see operating around them. While their God is being defied or disregarded, they cannot rest; they feel they must do something; the dishonour done to God’s name goads them into action.

This is exactly what we see happening in the narrative chapters of Daniel, where we are told of the ‘exploits’ of Daniel and his three friends. They were men who knew God, and who in consequence felt compelled from time to time actively to stand out against the conventions and dictates of irreligion and false religion.

2) Those who know God have great thoughts of God.
There is not space enough here to gather up all that the book of Daniel tells us about the wisdom, might, and truth of the great God who rules history and shows His sovereignty in acts of judgment and mercy towards individuals and nations according to His own good pleasure. Suffice it to say that there is, perhaps, no more vivid or sustained presentation of the many-sided reality of God’s sovereignty in the whole Bible.

In face of the might and splendour of the Babylonian empire which had swallowed up Palestine, and the prospect of further great world-empires to follow, dwarfing Israel by every standard of human calculation, the book as a whole forms a dramatic reminder that the God of Israel is King of Kings and Lord of Lords, that ‘the heavens do rule’ (4:26), that God’s hand is on history at every point, that history, indeed, is no more than ‘His story,’ the unfolding of His eternal plan, and that the kingdom which will triumph in the end is God’s.

3) Those who know God show great boldness for God.
Daniel and his friends were men who stuck their necks out. This was not foolhardiness. They knew what they were doing. They had counted the cost. They had measured the risk. They were well aware what the outcome of their actions would be unless God miraculously intervened, as in fact He did. But these things did not move them. Once they were convinced that their stand was right, and that loyalty to their God required them to take it, then, in Oswald Chambers’s phrase, they ‘smilingly washed their hands of the consequences’.

4) Those who know God have great contentment in God.
There is no peace like the peace of those whose minds are possessed with full assurance that they have known God, and God has known them, and that this relationship guarantees God’s favour to them in life, through death, and on for ever. This is the peace of which Paul speaks in Romans 5:1 – ‘being justified by faith, we have peace with God through our Lord Jesus Christ’ – and whose substance he analyses in full in Romans 8.

Of course the whole chapter – and the entire book – is so well worth reading. And he makes it clear in his foreword as to why the knowledge of God is so vital:

The conviction behind the book is that ignorance of God – ignorance both of his ways and of the practice of communion with him – lies at the root of much of the church’s weakness today. Two unhappy trends seem to have produced this state of affairs.

Trend one is that Christian minds have been conformed to the modern spirit: the spirit, that is, that spawns great thoughts of man and leaves room for only small thoughts of God. The modern way with God is to set him at a distance, if not to deny him altogether; and the irony is that modern Christians, preoccupied with maintaining religious practices in an irreligious world, have themselves allowed God to become remote….

Trend two is that Christian minds have been confused by the modern skepticism…. The uncertainty and confusion about God which mark our day are worse than anything since Gnostic theosophy tried to swallow Christianity in the second century.

Yes our need to know God and to know him as he really certainly is the main priority of our day. And this book goes a long way in helping us do just that. This top-notch volume has been out for 45 years now, and is still going strong. If you have not yet picked up a copy and read it, I encourage you to do so. It is a life-changer.

(Available in Australia at Koorong: www.koorong.com/search/product/knowing-god-with-study-guide-j-i-packer/0340863544.jhtml )