If you want to know everything there is to know as to what is wrong with Western universities, simply consider two recent incidents that make clear the sad, mad state higher education is in. Both come out of the UK and both show us that the West is toast if we are allowing these snowflake students to run our nations in the near future.

The UK Telegraph ran each story over a two-day period. Sadly, they simply are representative of so much of the disease we know as Western college education today. They show us the decrepit state of left-wing, politically correct activism passing for intelligence today.

Let me run with the October 25 story found in the paper. The headline is frightening enough: “Student union president causes outrage after vowing to take down war memorial mural because it contains only white men”. Here is how the report opens: 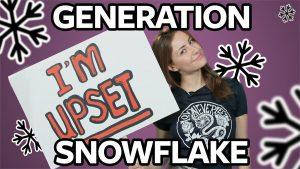 A Student Union President has caused outrage after she vowed to remove a mural commemorating students who died in World War One because it contains only white men. Emily Dawes, who leads the University of Southampton Student Union was widely condemned after tweeting: “Mark my words – we’re taking down the mural of white men in the uni Senate room, even if I have to paint over it myself.”

The Rothenstein memorial, to which she refers, depicts an unnamed student receiving a degree from the Chancellor of the University of Cambridge, representing all the young men who lost their lives in the war and were unable to complete or collect their degrees. It was painted in 1916 by Sir William Rothenstein, former Principal of the Royal College of Art, and presented to the University of Southampton in 1959, by the artist’s son, Sir John Rothenstein.

It features many key academics from the era of the Great War, including vice-chancellors and chancellors, and the then poet laureate Robert Bridges, and other panels of the mural feature young war poets who lost their lives in battle. It is unclear whether she was aware of the significance of the memorial, although she had tweeted linking it to Armistice Day.

Thankfully many were rightly incensed by this madness. The article mentions a few of them:

Southampton Itchen MP Royston Smith, who served in the RAF for 10 years, said her comments were “disappointing.” He told the Daily Mail: “With freedom comes responsibility, and considering the President of the SU holds a position of authority she has clearly overstepped the mark. I hope she will reflect on what she has said and realise it has been conducted in poor taste. Those who know the history of our island are fully aware and appreciate the involvement of black and Asian soldiers against tyranny.”

Conor Burns, MP for Bournemouth West, added: “Pathetic. She would be better going to the Hartley Library and reading some history. She could read of the sacrifice that allows such fatuous virtue signalling today.” The Southampton University Conservative Association labelled her comments “unacceptable,” tweeting: “Our union president promising to vandalise a memorial to those who served in the Great War, near the centenary of the end of the Great War. This is unacceptable.”
www.telegraph.co.uk/news/2018/10/25/student-union-president-causes-outrage-vowing-take-war-memorial/?fbclid=IwAR1tKlGrBRspqEC-hp5CME77YII1XY-0YvIn0l8KnDmxlXciqrBp7eat5dk

Yes. it sure is unacceptable. There are way too many lefty snowflakes taking offence at everything. But wait, it gets even worse. Consider a Telegraph article from October 24. If this does not tell you how bad our snowflake students have become, nothing will: “Oxford students vote to ban Christian group from college as it would threaten their ‘physical and mental safety’.”

Overwhelmingly the students voted in favour of banning the Christian prolife and profamily group Christian Concern. They had wanted to hold a camp next summer on one of the premises, but the students – led by homosexual activists – felt threatened by this move. I kid you not.
www.telegraph.co.uk/news/2018/10/24/oxford-students-vote-ban-christian-group-college-would-threaten/?fbclid=IwAR3MwYSNUdrUGNhG8iSBoB9PVBWLUCBq6cF9bmq4UxX14WrVjVPcnAR5z9Y

Good grief. I happen to know the head of Christian Concern and she is not threatening or dangerous. Andrea Minichiello Williams cares greatly about the UK and where it is heading. In their “About Us” page Christian Concern says this:

We have a passion to see the United Kingdom return to the Christian faith. Our nation has been shaped and defined by this faith for hundreds of years. Yet in the last few decades, the nation has largely turned her back on Jesus and embraced alternative ideas such as secular liberal humanism, moral relativism and sexual licence. The fruit of this can be seen in widespread family breakdown, immorality and social disintegration. Yet we believe that this nation has a hope, and that hope can be found in Jesus Christ. On this basis we seek to awaken the Church. We need to be passionate about our faith and become a light and a witness to the nation.

Whilst engaging with the Church, we want to work to infuse a biblical worldview into every aspect of society. We want to be a strong Christian voice in the public sphere, arguing passionately for the truth of the gospel and defending the historic freedoms that we have enjoyed in this nation for so long. We believe that by doing so, society as a whole will benefit. We seek to highlight injustice, change public opinion on issues of key importance and affect policy at the highest levels.

In a statement to The Christian Post, Christian Concern said this about the decision of the college:

We are perplexed as to how the historic Christian view of marriage, gender and sanctity of life would constitute a threat to students’ ‘physical and mental safety.’ We have held nine other Academies in Oxbridge colleges. Students there have been able to cope and neither we, nor those universities have heard of any harm caused by our events. On the contrary, we have often been told that we were exemplary guests.

We have written to ask the college what the expected costs would be for the additional security that they believe is necessary to prevent their own community members causing disruption to our event. It is disappointing that the college and its students would appear to feel so threatened by an event promoting the same Christian values as Oxford University has so clearly been shaped by.
www.christianpost.com/news/oxford-students-vote-ban-christian-group-lgbt-claims-threat-to-physical-mental-safety-228171/?fbclid=IwAR3x116TprySgSqVR-YTI5yWnbA8Y9DhPjoXZWpcUKr_cDKe5DJG3Om78h4

Political correctness, rampant leftism, and a snowflake culture that takes offence at everything are now overwhelming universities in the West. Not only do Christians and conservatives suffer as a result, but so too does truth itself. Heaven help the West if this madness is allowed to continue.

6 Replies to “Our Pathetic University Snowflakes”