What a difference a generation makes. When it comes to buying new commentaries, some might ask: Why bother? Are not the older ones sufficient? Well, yes and no. Older commentaries are still vital in any careful study of the biblical text, but there are newer developments that need to be addressed.

These can include new manuscript discoveries, and new findings in historical, cultural and archaeological areas. And new theological directions also need to be taken into account. So in a sense there is always a place for new commentaries. 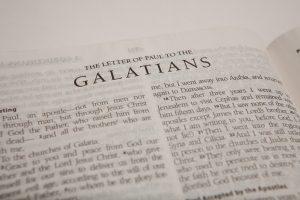 This was replaced in 1988 by Ronald Fung. It was and still is a very good volume indeed, running to 340 pages. The newest volume, coming thirty years later, is 540 pages, and contains matters that Fung and Ridderbos did not even address.

One of the most obvious differences that has occurred over the past six decades is how the so-called New Perspective on Paul now flavours everything – certainly in terms of how we are to understand one of Paul’s most important epistles. To learn more about what the NPP is all about, see my introductory bibliographic essay here: billmuehlenberg.com/2018/01/08/wright-new-perspective/

While the earliest proponents on the NPP, including Stendahl and Sanders, get some fleeting mentions in Fung, the chief populariser and proponent of the NPP, N. T. Wright is nowhere to be found in his 1988 work. And fair enough, since the first major work of Wright on this topic, The Climax of the Covenant: Christ and the Law in Pauline Theology, did not appear until 1991.

So needless to say, the new commentary by deSilva features plenty of references to and interaction with Wright and the NPP. I say all this by way of introduction. Any time NICNT comes out with a new volume it is well worth getting. Sure, they grow ever larger, longer and more expensive, but they are still very much worth it.

Previous heavyweight academic and scholarly commentaries on Galatians from the past few decades from a conservative and evangelical perspective have included: F. F. Bruce (NIGTC, 1982); Richard Longenecker (WBC, 1990); Thomas Schreiner (ZECNT, 2010); and Douglas Moo (BECNT, 2013). This new volume is a welcome addition.

The first hundred pages of his work involve introductory matters. Let me speak to just one of the matters dealt with there. Concerning the rather drawn-out debate as to whether Paul was writing to the churches of North Galatia or South Galatia, deSilva opts for the southern thesis, but says that the “evidence is inconclusive on either side”. And he argues that this is likely his earliest epistle.

As to the text itself, a careful verse by verse exegesis and exposition is engaged in. While interacting – as one must – with other authors and commentators, he keeps most of that discussion limited to the footnotes, so that interaction with the biblical text itself is foremost on each page. Let me highlight just a few key areas of Paul’s thought as discussed in this commentary.

A crucial part of Paul’s letter is Gal. 2:15-21. DeSilva spends 50 pages on these seven verses, and he includes four excurses therein: what Paul means by justification, works of the law, faith, and grace. As he says about 2:16, this verse “is perhaps the most dense and most debated in all of Pauline literature.” There is no question about that.

Interpretative, grammatical and theological challenges abound. On the famous debate about understanding “the faith of Christ/Jesus” as either an objective genitive or a subjective genitive, deSilva opts for the “traditional understanding” of “trust in Christ” after looking in depth at the pros and cons. But he argues that the discussion is “fraught with theological significance” as his own theological position (Methodist) makes clear.

The question of justification, which is “central to Christian theology, and Paul’s letters (esp. Galatians and Romans)” is of course a major point of discussion and debate with the NPP. DeSilva therefore frequently cites or interacts with Dunn, Wright and others, presenting himself as more or less sympathetic to the position.

He both agrees and differs with them on various matters, and also takes a similar stance regarding traditional Reformed thinking on these issues. Both his Methodism and his openness to aspects of the NPP accounts for his stance of course.

Thus he argues that a major battle in Galatians is not that of faith versus works, but the faith of Christ over against the works of the law. After explaining this in some detail, he then says this: “The principal problem with the Torah was that its term had expired and that what was its strength prior to Christ was now its greatest flaw – the maintenance of the boundary between Jew and gentile on the pretense that the former retained ‘favored nation’ status before God.”

Justification is, according to Paul (at least as deSilva reads him) not just some “particular transactional moment” as he sees those of the Reformed tradition guilty of affirming, but something “dynamic and relational”. Says deSilva:

We are not reading Galatians with Paul when we are thinking that he is most concerned with establishing “faith” or “grace” as “the valid ‘external’ soteriological basis of justification.” He is most concerned with moving Christ-followers forward in the process of transformation that Jesus has opened up for us by God’s fresh supply of God’s Holy Spirit, and not allowing us to be turned back from the direction in which Jesus has invited us….

He takes this stance throughout. In his comments on Gal. 5:1-6, for example, he says that this passage “raises questions about the adequacy of the prominent Reformation-era expression ‘justification by faith alone’.… In Paul’s economy, faith is important because this faith has led to the Galatian’s reception of the Spirit (3:2-5, 13-14)…. The slogan ‘justification by faith alone’ draws a sharp line between ‘faith’ and the very thing that faith was awakened to obtain, namely, the Spirit.”

He is impatient with arguments over monergism (the work of God alone) and synergism (the joint work of God and man) when it comes to issues of justification, righteousness, and the like: “Paul’s robust sense of the Holy Spirit at work within the Christ-follower makes it impossible truly to distinguish a precise division of labor, such that neither foreign, theological categories of synergism nor monergism suffice to capture Paul’s understanding.”

Those of the Reformed and Puritan persuasion would argue that this is to conflate and confuse justification with sanctification. While these are two distinct things, they also can never be separated. The once-off initial work of Christ in our lives (monergistic justification) is always to be followed up by our life-long transformational growth in holiness in cooperation with the Holy Spirit (synergistic sanctification).

But deSilva does go on to say that while there can be no salvation without a changed life (God’s goal is not just to get Christians off the hook come judgment day, but to make them new creatures), it is indeed God who is at work in the life of the believer via the Holy Spirit, and “thus in and behind all the Christian’s ‘working’.”

Theology is not only covered in this commentary: practical matters of course are also necessarily covered. Paul always follows up his doctrinal concerns with behaviour concerns, and so should all good commentators. And that deSilva does. For example, after looking at Paul’s first ten introductory verses, deSilva reminds us of contemporary relevance of all this.

Paul’s insistence on one gospel does not mean, as deSilva reminds us, that Christians cannot disagree on various matters, but there are nonetheless certain theological boundaries which we dare not transgress:

Paul is especially attuned to the danger of compromising the terms of God’s invitation and the fulness of God’s vision for the sake of making the same more appealing or palatable to those with whom we have to do. In Paul’s mind, the problem arises not from pleasing human beings but from making this an aim that competes with pleasing God. There is no virtue in being overtly displeasing to people, and Paul is elsewhere quite finely attuned to the importance of not putting any unnecessary obstacles in the way of people (2 Cor. 6:3). He is aware, however, that there are necessary obstacles (e.g., see Gal. 5:11b).

Or as he remarks on Gal. 6:7: “Christian freedom carries with it substantial responsibility to use that freedom as God intended and as God, through the Spirit, directs and empowers. The absence of law does not mean the absence of consequences or accountability before the One who searches our inmost intentions and thoughts.”

Obviously much more can be said about this work. Those who dislike the NPP or non-Reformed treatments may find themselves demurring too often here. But if you are able to live with some theological differences, while enjoying reading the work of a world-class New Testament scholar, this volume should not disappoint.

If you insist on commentaries from a much more Reformed perspective, then stick with volumes by Moo, Schreiner and others. But this helpful work will stand the test of time, even if it invites robust discussion and debate at various places.

(Available in Australia at Koorong: www.koorong.com/search/product/the-letter-to-the-galatians-new-international-commentary/9780802830555.jhtml )

12 Replies to “A Review of The Letter to the Galatians. By David deSilva.”