Every time a decidedly evil, ungodly and immoral politician or political party wins office, I ask myself questions such as the one found in my title. It is an oft-heard phrase found in the Old Testament. And these are the sorts of questions all true Christians should be asking at times like this.

I not only ask such questions, but I feel sick in my stomach. When I see wicked men strutting their stuff, proud and arrogant, smirking as they think they are getting away with evil, I am reminded of Isaiah 3:9: “The look on their faces testifies against them; they parade their sin like Sodom; they do not hide it. Woe to them!” 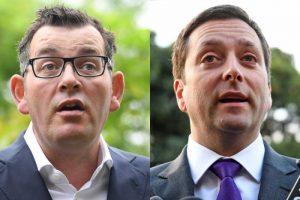 And I wonder why evil is allowed to go unchecked, why people are so blind as to elect such reprehensible individuals and parties, and why God allows all this to happen. And I grieve deeply for how much worse things will get – spiritually, morally, culturally and politically – when such ungodly rulers get voted in.

With Dan Andrews and Labor getting back in for another four-year reign of terror in Victoria, I just groan within and get on my knees and cry out to God about all this. I do it because I understand that politics is important, and I understand the teachings of Scripture, including the biblical truths that “righteousness exalts a nation, but sin is a reproach to any people” (Proverbs 14:34).

I do it because I care greatly for the sort of world my children and their children will have to grow up in. I do it because I know that things will simply get much worse, and all that we care deeply about will be further attacked, undermined and destroyed.

The culture of death will simply get worse. The assault on family and children will get even more pronounced. The early sexualisation and politicisation of our children will go from bad to worse. The attack of freedom of all sorts will escalate. Christianity itself will become even more a target of the militants.

I care about all this and it grieves me deeply. And I wonder why so many Christians do not seem to care. It seems they could not care less as evil triumphs and wickedness escalates. Worse yet, how many Christians actually voted for the ungodly and immoral policies of the Greens and Labor?

Obviously I am writing hot on the heels of today’s state election. Dan Andrews and Labor have been returned to do even more evil. While the final numbers are not fully clear, we know that the Liberals have not succeeded in replacing this diabolical government.

The situation is this. Prior to the election this was the state of play. The two Houses of Parliament have 128 Members in total:

Now we seem to have something like this for the 59th Victorian Parliament, as seen in the Legislative Assembly results:

Politically, the short story is this: there were big swings to Labor and away from the Liberals and Nationals. It is a bad night if you are a conservative or a Christian. As I have written before, the Libs were certainly no panacea, but they would have been far better than the current mob.

They had plenty of shortcomings, but at least they would have put a check on some of the evil Labor policies, and rolled back a few, such as the devilish “Safe Schools” program. But that is not to be, and the radical left agenda of Andrews will now further spin out of control.

One can also argue that most folks – including most Christians it seems – really do not care about the things that matter. As Francis Schaeffer put it decades ago, all that matters for most people is personal peace and affluence. That’s about it sadly.

I mentioned above that often God’s people asked God why evil seems to triumph. Many such verses can be mentioned here. A few of them would be the following:

-Job 21:7 Why do the wicked live on, growing old and increasing in power?
-Psalm 73:2-5 But as for me, my feet had almost slipped; I had nearly lost my foothold. For I envied the arrogant when I saw the prosperity of the wicked. They have no struggles; their bodies are healthy and strong. They are free from the burdens common to man; they are not plagued by human ills.
-Psalm 94:3 How long will the wicked, O LORD, how long will the wicked be jubilant?
-Jeremiah 12:1-2 You are always righteous, O LORD, when I bring a case before you. Yet I would speak with you about your justice: Why does the way of the wicked prosper? Why do all the faithless live at ease? You have planted them, and they have taken root; they grow and bear fruit. You are always on their lips but far from their hearts.
-Habakkuk 1:13 Your eyes are too pure to look on evil; you cannot tolerate wrong. Why then do you tolerate the treacherous? Why are you silent while the wicked swallow up those more righteous than themselves?

As it became clear that we would have more disastrous Labor rule, my mind turned to the ancient Israelites. They too experienced this. Prophets like Jeremiah warned them that their sins – unrepented of – would of necessity lead them to divine judgment.

The dreaded Assyrians and Babylonians – at the time perhaps the most wicked and blood-thirsty nations around – would be used by God to judge Israel. While most folks deserved their fate, there would have been some devout and godly Jews who bewailed all this. They would have been asking God the hard questions.

They would have cried out to Yahweh, asking why HIS people would be so severely judged, and why such godless, pagan nations would seem to so thoroughly triumph. Well, we know the story: we know that these times of judgment and exile were temporary.

We know that eventually the Jews were able to return to their land and rebuild. Yes, much was lost, and much had to be done – they had to start over in so many ways. And that too may be our fate. Thus the godly amongst us will cry out to God. Our hearts and spirits are utterly devastated.

‘Why God do you allow such evil and wicked rulers to get away with murder?’ And that is literally what this government is doing with its diabolical abortion and euthanasia laws. They ARE getting away with murder, and blood is on their hands. And God will not hold them guiltless.

But if the Lord should tarry, eventually this government will come to an end. Perhaps more godly and principled politicians and parties will arise to take their place. As I keep saying, politics alone cannot save us, but a return to less evil rulers will be a step in the right direction.

And in terms of the bigger picture, one day ALL the rule of evil will come to an end. One day all these politicians will be judged. One day the wicked and the arrogant will no longer flourish. Yes it hurts terribly in the meantime if you are a child of God, and you ache with what breaks God’s heart.

In the same way Christians and others suffered horrifically under godless Soviet communism for some 70 years. How many were killed, tortured, imprisoned and exiled by this monstrous regime? Millions upon millions. People cried out: “Where are you God?” But eventually the wall came down and the evil empire came to a crashing end.

One day the Andrews’ empire of evil will end – as will all wicked human rulers and nations. Yet, in the meantime the godly amongst us will travail in pain, crying out to God for mercy. We will be asking, “How long O Lord?” We will grieve and hurt, and feel overwhelmed at times when evil comes in like a flood.

According to their deeds, accordingly He will repay,
Fury to His adversaries,
Recompense to His enemies;
The coastlands He will fully repay.
So shall they fear
The name of the Lord from the west,
And His glory from the rising of the sun;
When the enemy comes in like a flood,
The Spirit of the Lord will lift up a standard against him.
The Redeemer will come….

62 Replies to “Four More Years of Hard Left Rule: Why Do the Wicked Prosper?”