Let me offer a few introductory thoughts first: Perhaps the two main considerations folks might have as to whether or not they buy this commentary are these: Do I have enough money, and do I have enough shelf space? This is an expensive and rather large commentary (over 1150 pages). Normally those two considerations would not deter me in the least. However this is a revision of Moo’s earlier NICNT commentary, so some deliberation may be in order. 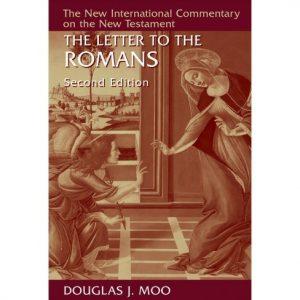 The fact that I am now reviewing his new edition shows that I did not deliberate on this all that long! Some of you may have noticed that often a revised or updated volume is not really worth dishing out more money on. Bibliographies may be updated or some minor tinkering around the edges may have occurred. But that often does not really justify dishing out hard-earned cash to buy the new version when the older one will usually suffice.

So what about Moo’s revised work? The first NICNT volume on Romans was the 700-page work by John Murray, originally released as two volumes back in 1959. Moo’s replacement volume appeared in 1996 and was 1000 pages in length.

That was entitled The Epistle to the Romans. So as not to confuse things, his revised version is called The Letter to the Romans. It was released late this year, and comes to almost 1200 pages. One also must be aware of another work Moo did on Romans, the 2000 NIVAC volume of some 500 pages.

Those who have Murray, the two earlier Moo commentaries, and other books on Romans, may ask if his newest offering is worth getting. Obviously I thought it was, as I now have it and am reviewing it. So what is new and what has been added?

As to the 150+ pages added, much of this comes in the form of a 125-page bibliography. This compares to just eight pages in his first volume. But much new material was nonetheless added, but as Moo states, he also deleted some material found in the first edition, partly to keep the size from blowing out too much.

Concerning Pauline studies and how we understand the letter to the Romans, there is much that has changed or been added in the past 22 years. One of the most significant changes and developments has been the rise and rise of the so-called New Perspective on Paul. It was certainly there in 1996 (first arising in the 70s), but still somewhat in its infancy.

But since then it has really exploded on the theological scene, especially with the voluminous work of N. T. Wright. In his 2000 NIVAC commentary on Romans Moo discussed this a bit, and here he takes full account of this massive theological discussion, and interacts with Wright and others on this to a fair extent.

Indeed, in his large bibliography we find nearly 20 of Wright’s works featured, while none were found in his original bibliography. And there are various discussions of the issue, including a 15-page excurses on the topic, with Moo looking at the pros and cons of the view, especially focusing on Sanders, Dunn, and Wright.

He writes (quoting from words he had penned elsewhere in 2004): “my quarrel with new perspective advocates is often not so much over what they say but about what they do not say – or, perhaps better, the overall balance that they give to certain issues.” He concludes:

In general, then, I am convinced that the teaching of Paul – and of Jesus and Matthew and Luke and Mark and Peter – cannot satisfactorily be explained without the assumption that some Jews, at least, had drifted from a biblical conception of the primacy and sufficiency of God’s grace into a belief that regarded their own works done in obedience to the law as basic to their justification/salvation.

Or as he says at the start of his comments on Rom 1:18ff: “If, then, justification by faith is not the center of Romans or of Paul’s thought in the logical sense, in another sense it expresses a central, driving force in Paul’s thought…. In this respect, the Reformers were not far wrong in giving to justification by faith the attention they did.” This is found in both editions.

Those unaware of the NPP and what it entails are invited to see my earlier piece on this: billmuehlenberg.com/2018/01/08/wright-new-perspective/

Other areas deserve some mention. In his discussion of Rom. 8:12-13 the matter of the believer falling away arises. Basically repeating what he wrote two decades ago, he says:

I believe that the strength of the assurances Paul has given to justified believers throughout these chapters (see especially 5:9–10, 21; 8:1–4, 10–11), along with the finality of justification itself, favors the Calvinistic interpretation. But such an interpretation in no way mitigates the seriousness of the warning that Paul gives here. In a way that we cannot finally neatly synthesize, Paul insists that what God has done for us in Christ is the sole and final grounds for our eternal life at the same time as he insists on the indispensability of holy living as the precondition for attaining that life. Neither the “indicative”—what God has done for us in Christ—nor the “imperative”—what we are commanded to do—can be eliminated. Nor can they be severed from one another; they are inextricably connected.

Consider another area. Given how radically the whole homosexual debate has been over the past few decades, including in the churches, I looked to see if Moo had perhaps added an excurses on this topic, but none was to be found. However he maintains his biblical stance from his original volume: homosexuality is a sin.

He concludes his examination of Rom. 1:24-26 with these words: “It is clear that Paul depicts homosexual activity as a violation of God’s created order, another indication of the departure from true knowledge and worship of God” – exactly the words he used 22 years earlier.

On the vexatious issue of how we should understand Romans 7 and the struggle with sin, Moo looks at the four main ways on understanding the identification of the one being discussed in vv. 7-25: the autobiographical, the Adamic, the Israel, and the existential direction. He argues that a combination of the first and third views may best explain the text. And he argues that vv. 14-25 refer to the situation of an unregenerate person, not a regenerate one.

Two clear hot potato issues involve the future of ethnic Israel and the concept of predestination, both discussed in much detail in Rom. 9-11. As to the former, Moo of course sees it as a fully biblical doctrine, but concerning the notion of double predestination, he offers caution.

When discussing the hardening of Pharaoh’s heart for example in Rom. 9:14-23, he says that Calvin’s teachings on this can be gleaned from Paul, not just here, but in 11:7 as well. Such texts “provide exegetical support” for such an interpretation. “Nevertheless, we must be cautious in drawing such a conclusion,” as he goes on to explain.

And concerning the issue of trying to reconcile divine sovereignty with human free will, Moo perhaps rightly comments on 9:13 that God is indeed just in all that he does, but “no resolution of this perennial paradox seems possible this side of heaven.”

As to the issue of Israel and its future, part of that very complex and detailed debate has to be examined by understanding that Paul speaks to both corporate and individual election in these three chapters – something he had already discussed in his first edition.

In the new edition he adds an excursus on this, “Recent assessments of Paul and Judaism”. The issue of supersessionism (that the church has superseded or replaced Israel) has long been maintained by many throughout church history.

Most sides in the debate agree that there is some continuity and some discontinuity between the Testaments. Says Moo, one might see some sense of supersessionism as we move to the NT, since “God’s people are now defined Christologically”. But language of ‘replacement’ falls short of Paul’s thought:

Of course there is still to be a future ingathering of Israel: “The Jewish people, Paul affirms, like Gentiles, can find salvation only through Christ; and, likewise, the salvation of many Jews in the last days (11:26), while its mechanics are not spelled out for us in any detail, also comes through Christ.”

Much more can be said. For example, another issue that can generate some debate is how we understand the sword of Rom. 13:4. Does it include capital punishment? Maybe, says Moo – in both editions. That discussion is mainly relegated to footnotes.

As to a very minor point, I looked up one book that he mentioned, but it turns out he gave it the wrong title – and in both editions. The 1970 volume by John Coolidge should be Pauline Renaissance in England: Puritanism and the Bible, not Puritan Renaissance in England: Puritanism and the Bible (which is why I first had a hard time looking it up).

In sum, and all things considered, this remains a terrific commentary. The theological positions of Moo have changed very little over the years, and there is plenty of overlap between the two editions. But still, a fair amount of new and worthwhile material has been added.

So for some of you at least, this might be well worth picking up, even if you have his two earlier commentaries on Romans.

2 Replies to “A Review of The Letter to the Romans. By Douglas Moo.”