Plenty of ink has already been spilled on the government response to the recently-released Ruddock report on religious freedom, but let me present a few more words on it. First, I will offer a number of brief considerations, and then I will provide some longer thoughts on all this.

-Details of the report’s 22 recommendations were released previously, so we have not too much new material here, but more background information, and insights on how the Morrison government wishes to proceed. 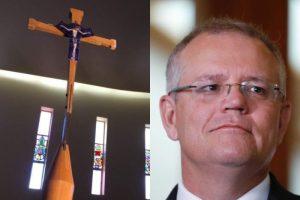 -Being a precarious minority government, and with a federal election due next May, it remains to be seen how much can and will be done on this in the next few months.

-Prime Minister Morrison has said that religious freedom will be a key issue he will run with into the election. How this washes with an increasingly secular Australia remains to be seen however.

-Federal Labor will of course be resistant to much of what Morrison may want to do here.

-What ultimately really matters is any draft legislation that will appear on this, informing us in concrete and specific terms just what and how the government will run with all this.

Now let me turn to other considerations which will need a bit more time to explain. First, Philip Ruddock claims there is not much evidence for discrimination against religious faith. Um, he is living in dreamland. I and others have repeatedly documented genuine cases of religious persecution and anti-Christian bigotry in Australia. The problem is real.

Second, we must bear in mind that the whole reason this is being discussed is because of special rights – including fake marriage – being granted to homosexuals. All throughout the marriage debate the other side lied constantly, claiming no one would be impacted if homosexual marriage goes through.

We know how blatantly false this is. There was no real problem with religious freedom up until recently. But when special rights are granted on the basis of not just sexuality, but for “sexual orientation” and “gender identity” and the like, then everyone is impacted.

Third, when religious freedoms come into conflict with supposed discrimination based on sexuality, guess who always loses? No matter what the Morrison government finally comes up with, it will be an uphill battle to preserve genuine religious freedom in every sphere, from homes, to schools, to churches, and to faith-based organisations.

As Everett Piper just wrote concerning this issue in America:

It is legally and politically untenable to pretend you can grant minority status to any group of people and then maintain for yourself an “exemption” to deny these people the minority protections you just granted them. If “sexual orientation” and “gender identity” (a moving target and transient definition if there ever was one) are granted minority class status under federal law, what in the world makes the religious institution think that its “religious freedoms” should or will ever trump the civil rights of the protected group it just recognized?

Even Chai Feldblum of the Equal Employment Opportunity Commission agrees with this fact when she boasts of the “zero-sum game,” where the rights of LGBT Americans will be secured only by curtailing the rights of religious Americans. LGBT community rights “cannot be adequately advanced,” says Ms. Feldblum, “if pockets of resistance are permitted to flourish.”
m.washingtontimes.com/news/2018/dec/16/how-evangelical-capitulation-equals-the-loss-of-re/?fbclid=IwAR3E78fv1QWMqHsC8qbKoNaiQJzc0-R-2t1MhIuQSTjaaH8Vm7HcNJ-XGDM

Fourth, conservatives and Christians have normally been averse to top-down “solutions” to these sorts of problems. Thus many of us opposed things like a Federal Bill of Rights, and for good reason. Such things simply give the state too much power, and when the state decides what rights can and should be granted, they can easily decide which rights can be taken away. But see more on this here: billmuehlenberg.com/2005/08/07/what-is-wrong-with-a-bill-of-rights/

Fifth, such government mechanisms will of necessity result in competing human rights groups, watchdogs and bureaucracies. Yes, a democracy is all about balancing competing rights and the like, but making this the stuff of state determinations is always risky.

As mentioned, the activists tend to win in such standoffs, and compromise is the usual result – not for the sexual militants, but for faith-based groups. They always tend to come off second-best here. And having the state adjudicate here is fraught with danger.

If a Muslim gets the top job – or one of them – will he rule fairly for Christians? Will an atheist be allowed to run the department or call the shots? Religion is a very large term covering a lot of ground. Which religions will benefit, and which will suffer?

And even if a Morrison government sets up something like this, and appoints a really good person or persons to fill such roles, they can easily be replaced by a Labor government. We could have some good folks doing some good things re religious freedom for a few months, but lose it all in May.

Related to this is my seventh point. Religious freedom is of course a good thing, but like all freedoms, not an absolute in a fallen world where competing interests and values must be balanced. Christians of course will want to have the religious freedom to, say, preach the gospel unhindered on a downtown street corner, or have only Christian teachers in a Christian school.

But a Muslim may well want the religious freedom to, say, spread sharia law far and wide in Australia. Of course that is already happening here. In the interests of religious freedom, will things like female genital mutilation and polygamy be granted further legal protections to freely operate in Australia?

Eighth, we have the issue of Christian capitulation in all this. It is bad enough when activist groups, aided and abetted by the heavy hand of the law, wear down our religious freedoms, but too often gullible and clueless Christians further aid this process.

For example, in the US right now some evangelical groups have been capitulating big time to activist demands to have sexual orientation and gender identity (SOGI) laws fully ensconced in government legislation. This is another case of the activists getting what they want while the Christian church continues to lose it all.

In the mistaken interests of “love” and “acceptance” far too many Christians already have handed the activists all they want on a silver platter. Far too many of them have no worries at all about the erosion of religious freedom. So our own side keeps doing us in, sadly.

Finally, the stakes are very high here indeed. As Jennifer Oriel put it in The Australian:

Religious freedom is the subject of private conscience and a public good that provides for civil society by limiting state authority over family, friendships and faith. It is essential to liberal democracy and the flourishing of liberty. In the Western context, religious freedom empowers citizens to live according to their innermost beliefs while respecting the basic rules that govern open society. Without it, we would be unfree.

Plenty more can be said here. And readers will complain that this is all rather gloomy, and that I offer no solutions to get us out of this morass. It certainly is gloomy, but whether we can now at this late stage find a way out is a moot point. The homosexual horse has bolted – long ago.

Many decades ago I and others warned all we could how religious freedom would be under huge attack if we keep granting special rights to these activist groups. Now they have almost all they want, and just seek to get the church to fully acquiesce, or be hounded out of business.

Once laws are passed, such as faux marriage laws, it is very hard to undo them. And the activists have made it clear that they are certainly not done yet. They want complete acceptance and promotion of their lifestyle, and they want it everywhere – in schools, in churches, and even in homes (as in targeting home-schooling).

It really will be the end of religious freedom then. So right now we are fighting a rear-guard action. These fights should have occurred at least thirty years ago, if not earlier. But sadly many of us were voices crying out in the wilderness all along. We warned and pleaded with folks – especially Christian folks – to wake up and protect their freedoms.

But hardly anyone listened – or cared. Now so many of our freedoms are gone, and things will likely only get worse. It does not do much good at this point to say “we told you so”. But we did! Yes, we can all pray and work with the current government to see some sort of legislation put up that will do some good.

But I for one am not holding my breath. Too much has already been lost. Far too many concessions have already been made. Far too much progress by the activists has occurred. Trying to put the genie back in the bottle at this late stage will be all but impossible – barring a miracle.

And a miracle is exactly what we now need. And the church is the only one that can be of help here. All true believers have really only one option left: to get on their knees and repent of their carelessness, apathy, indifference, carnality and compromise.

And pray for a miracle. The only real miracle to save us now will be a revived church. It has been an overwhelmingly dead or sleeping church that has allowed all this to happen, and only a revived and alive church can hope to see things turned around.

23 Replies to “The Battle for Religious Freedom in Australia”