We live in dark times. There is just no getting around that fact. Truth no longer means anything, feelings trump everything, and confusion abounds as to even the basics in life. Now we can’t even tell if someone is a boy or a girl, and we are said to be hateful and bigoted if we even try.

Sadly, as anyone who seeks to present truth in the public arena and the social media knows, this has massively impacted our churches as well. Today most young people who call themselves Christians know little or nothing about their own faith, run on emotions, and tend to just drift along with the dominant secular culture. The church in the West is in a real bad way as a result, and things will likely only get worse.

And as one of the most recent examples of this, consider the recent uproar taking place over Mike Pence, his wife, and Lady Gaga. The hot-potato story erupted last week when the mainstream media learned about a horrible reality: a Christian is teaching at a Christian school, and both believe in Christian values. 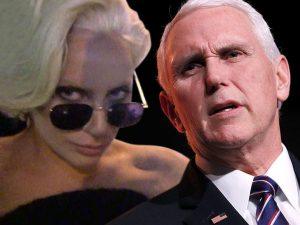 This was just fully out of bounds for the secular left MSM. The New York Times quickly jumped all over the story. Its opening words were factual enough:

Karen Pence, the second lady of the United States, returned to teaching art this week, accepting a part-time position at a private Christian school that does not allow gay students and requires employees to affirm that marriage should only be between a man and a woman.

The website of the school, Immanuel Christian School, which enrolls kindergartners through eighth graders at its campus in Springfield, Va., details its religious beliefs and expectations of both students and their parents, as well as those who wish to work there. The school’s employment application requires candidates to describe their faith in Jesus Christ, affirm that they are a born-again Christian and vow to adhere to specific standards in their personal and professional lives.

The eighth item on the application’s “Articles of Employment,” which requires applicants to sign their initials next to a list of beliefs, outlines Immanuel Christian’s definition of marriage and stances on sexual identity.
www.nytimes.com/2019/01/16/us/politics/karen-pence-school-lgbt-ban.html

But it was all downhill from there. The NYT piece even mentioned – gasp, horror – that the students from the school would be going on a field trip to the Creation Museum in Kentucky next month! What a terrible and barbaric school this must be: it not only upholds biblical teachings on marriage and family, but also believes that the world was created by God. How dare they!

The mainstream media beat this story to death, putting it right up there with every great evil known to man. Imagine the VPOTUS and his wife actually claiming to be Christians and acting like it? This is just too much for the fake news media to handle.

Never mind that several recently elected Islamic congresswomen are thinking and acting just like Muslims. Not a peep out of the MSM about that. It is just fine if Rashida Tlaib and Ilhan Omar swear in on a Koran, denounce Israel, promote sharia, and castigate Pence’s faith. No probs there.

But how dare these uppity Christians actually live according to their own faith tradition in the public arena? Let’s just lynch them already! As Tony Perkins of the Family Research Council put it:

This attack on Mrs. Pence is more evidence of the growing intolerance, if not outright hostility toward biblical truth and those who live by that truth, especially those who hold positions in the public square. The message being sent is quite clear: (1) Biblical faith and adherence must be checked at the door of public service (which is a reverse religious test), and (2) Those who hold to these “antiquated” views should be relegated to the margins of society.
www.frc.org/get.cfm?i=AL19A03

Again, we don’t find the MSM routinely attacking Muslim schools for pushing Muslim beliefs and practices. But if a Christian school dares to do this, they are obviously evil incarnate and must be opposed. The MSM just does not get its own hypocrisy here. As Matt Walsh said:

Here’s the dirty little secret about (legitimate) Christian schools: they are in the business of teaching Christianity. They teach other things, too, but always through a Christian lens. If you are not willing to impart or receive those teachings, then there are many other lovely educational options available.
www.dailywire.com/news/42258/walsh-left-outraged-because-mike-pences-wife-got-matt-walsh

If this were the end of the story it would be bad enough. But things have just ratcheted up a few notches with outraged celebs now getting into the act. And one of the most bizarre rants heard so far comes from one pillar of morality, rationality, and Christianity, Lady Gaga.

Yes you heard me right. She has weighed in on this kerfuffle, making some extraordinary claims, implying that the Pences are the worst Christians around while she is evidently the best Christian there is – really! She said this:

To Mike Pence, who thinks that it’s acceptable that his wife works at a school that bans LGBTQ, you’re wrong. You’re the worst representation of what it means to be a Christian. I am a Christian woman, and what I do know about Christianity is that we bear no prejudice, and everybody is welcome. So you can take all that disgrace, Mr. Pence, and look yourself in the mirror and you’ll find it right there.
www.usatoday.com/story/life/people/2019/01/21/lady-gaga-slams-vice-president-mike-pence-christianity/2636241002/?fbclid=IwAR3T5yf8kllSg8rQ7qPFvj_R8tGP3sANeq8HZc8S1dmOfvOXeohsGz9MqZU

Wow. So a routinely sleazy, debauched, and raunchy singer is now trying to pass herself off as a terrific Christian and a paragon of virtue, while telling us that the Pences are evil personified, and must be in bed with the Antichrist. Yep, OK, makes perfect sense to me. Sure, why not.

Why does that ancient word from the prophet Isaiah keep coming to mind at times like this? Why does it seem perennially relevant, especially in these dark days. Under divine inspiration he made this sober warning: “Woe to those who call evil good and good evil, who put darkness for light and light for darkness, who put bitter for sweet and sweet for bitter” (Isaiah 5:20).

I return to where I first began: our culture is now just a septic tank. And worse yet, how many Christians will actually side with Gaga against Pence on this? How many will simply emote their way through this whole affair, and think Gaga is somehow the epitome of Christianity while Pence and his wife are evil old dinosaurs who must be renounced as unloving, bigoted and narrow-minded?

We already know that this is how most of the world looks at these matters, but the shocking thing is how many people claiming to be Christians will likely feel the very same way. When you get heaps of Christians – at least the younger ones – defending folks like Gaga while condemning folks like the Pences, then you know Christianity in the West is all but finished.

Please pray for Mike and Karen. They sure need it right now. And pray for Gaga. While at the end of the day only God fully knows the human heart, we have plenty of Scriptures telling us we can assess a person’s faith or lack thereof by both their beliefs and their behaviours.

29 Replies to “Gaga, Pence, and Christianity”