Should Western societies ban the burqa? A number already have (such as Denmark, Austria, Belgium, the Netherlands, and France), and a number of others continue to debate this issue. There are legitimate concerns about the burqa, so such debates are well worth having. See more on this in my two earlier pieces on this topic: 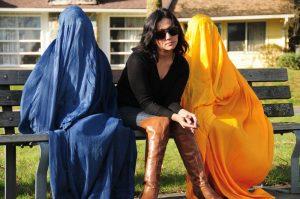 I address this issue again because a good friend recently posted on this, arguing against any such bans. While it has been up for a while now, I only just recently came upon it, so I thought I would add my two cents worth here. As mentioned, the fellow in question is someone I know (at least in cyberspace) and greatly respect.

He is a fellow Christian and conservative, and this may be the first time I have differed with him on something. So I enter this discussion not as an antagonist but as a friend, and one who appreciates all that this fellow has to say. Let me offer here his short social media post, “I reject banning the burqa in Australia for the following reasons”. He writes:

1. It allows the state to intrude into people’s religious lives not with the justification of preventing direct harm to others, but simply because it’s deemed by the state to be ‘oppressive’. Think about it, if we can ban the burqa simply because the state deems it to be oppressive, what else can be banned along similar lines?

2. If the claim is that women, despite what they say, are forced by their husbands/communities to wear it, then we have a case of the state entering into the sanctity of the home and family to set something straight in accordance with an abstract ideal – freedom. In this case the state ignores what the actual women who wear it are saying and just intervenes anyway. Again, dangerous stuff from the perspective of liberty.

3. What actual harm or danger is the burqa in Australia? How many Muslim women actually wear them? Personally I don’t find them very aesthetically appealing, and I do find them unaustralian (if that term even has much meaning anymore, especially in the cities) – but that doesn’t strike me as a sufficient reason for the state to get involved.

4. Hands up all Christians who’ll stop wearing their Crucifixes just because the state says so. Didn’t think so.

In summary, in this age where there are more people than ever who seek to take the reigns of the state to oppress (conservative) religionists, the worst thing we can do is to license the state with more powers to interfere in people’s religious lives in accordance with abstract principles.

Banning the burqa strikes me as a fairly pointless exercise that will cause more harm than good. Better to seriously consider justifications for culture-sensitive immigration policies so that over time the number of burqas we see won’t increase. I admit that my idea is also fraught with potential risks, but I’m not sure that there’s an approach to the problem of cultural integration that isn’t.

In response, I see where he is coming from, and I am somewhat sympathetic to his position. However, it seems a major issue here is, where does one identify oneself along the political spectrum? If you are more of a keen libertarian, his piece may well appear sensible indeed. If you are more of a conservative, there may well be problems with it.

And there are some real differences between the two positions. For the record, I am not a libertarian, and I have written often as to why that is the case. See here for example: www.billmuehlenberg.com/2011/12/27/conservatism-libertarianism-and-christianity/

It seems his main concerns are about government intrusion – something libertarians always seem to detest, and something conservatives normally detest, but within limits. But let me look at each point and offer a few replies.

1. Of course the state already is intruding into our lives – religious or otherwise. Simply for a state to exist will mean some intrusions will occur. The real question is, which of these intrusions are warranted and justifiable. And why speak only about the state deeming it necessary to get involved here because it is oppressive? Many folks have major concerns about burqas. Surely their concerns count for something as well here.

2. The argument here is again more or less libertarian in nature. There are plenty of instances where it is a good thing indeed when we have “the state entering into the sanctity of the home”. When murder occurs there, or rape, or incest, I sure hope the state intervenes. And of course one could argue that it is the libertarians who are the ones who have an inordinate fixation on “an abstract ideal – freedom”. Our concerns about the burqa are not really abstract at all, but rather concrete.

3. The issue is not how many women wear them. Even if the numbers were quite low, we still need to look at the reasons why people have concerns about them. So yes, we do need to ask if there are harms to wearing burqas. Two main harms seem to arise here: One, the harm to the women themselves, who are treated in such a manner. It really is a type of second-class citizenship.

If one chooses to do this, that is one thing. But it seems most are being forced to wear it. Second, there are legitimate security concerns that also can arise here with head to feet covering: criminal and terrorist activities can and have occurred with folks hidden under such garb.

4. Generally speaking, a law should apply to all groups of people equally. But not always. We usually never allow convicted paedophiles to get work as school teachers involving young children. But most other folks are NOT banned from such jobs – although background checks may be run on all folks seeking to get such jobs today.

In sum, I fully agree that we have far too much government intrusion in our lives. But some of it can be necessary. And when we have a decidedly undemocratic and dangerous political ideology such as Islam, then we have even more reason to walk carefully here, and not just allow open slather for every religious practice that comes along.

We already do ban some dodgy religious practices, eg, suttee, honour killings, etc. Those restrictions do not mean the end of freedom as we know it, but are some prudent steps taken for the common good. So the issue is not whether we allow some state intervention in some areas – we already do, and for good reasons.

The issue is how far we go in all this. I admit that the issues can get rather complex and nuanced. As I said in the second article I link to above, written back in 2007:

As no nation can long survive without a set of commonly-agreed to values and ideals, and without some social cohesion, the problem of opening one’s doors to foreigners while maintaining some kind of national soul or identity is a difficult one.

When France several years ago decided to ban religious symbols and clothing in its schools, there was a mixed reaction. Fred Nile in Australia, for example, thought it was a good thing, forcing Muslims to declare their real allegiances, and so on.

While I concurred with this line of thinking to an extent, I also had my concerns. The truth is, an attack on one religion by a secular state is also an attack on all religions. Thus it is not just Muslim headgear for example that is outlawed in French schools, but Christian crosses as well. Thus the problem is complex and multifaceted.

But certain points can be made. Some groups have managed to maintain their unique identity while living peacefully in a host culture. But quite often, Muslims living in the West have had some difficulties settling in….

So it can be seen that I have shared some of my friend’s concerns for quite some time now. But I am also not willing to let an unbridled libertarianism on my part cloud my vision as to what a very real threat political Islam is to the West. If the survival of Western freedoms and democracy are further enhanced by restricting the wearing of the burqa, that might be something worth considering.

As I concluded the first article I link to above, penned in 2014:

A democracy must always balance the rights of the majority with those of the minority. Generally speaking, individuals should be able to dress as they please, within reason. But societies have every right to expect that those coming from foreign lands offer a degree of agreement with its core beliefs and values, including the full political and social equality of women.

All things considered, I cannot offer a blanket ‘no’ to a burqa ban at this point. But how we proceed here certainly requires further careful thought and attention.