There is not much new under the sun as the writer of Ecclesiastes reminds us, and a basic knowledge of the past 2000 years of church history can help us quite a lot, especially to help us avoid past mistakes. And cultic and heretical groups all around us are one such thing we all should seek to be aware of and eschew.

To help us avoid being sucked into a cultic group or a heretical teaching, all Christians should be aware of history in general and church history in particular. With this in mind, I want to draw your attention to five blatant cases of crazy cultism. 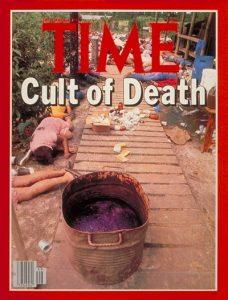 The first two have to do with sex and are rather recent; the next two have to do with killing, and are a bit older; and the last case has to do with both and happened 500 years ago. So let me work my way back from today to long ago. The most recent case involves some nutjob cultist from Texas. As one write-up says:

Self-styled Texas prophet and internet preacher Joshua Holmes, who went viral in recent months for his ministry theatrics that led many of his female followers to start calling him “Jesus in the flesh,” has been captured in leaked video recordings indulging in explicit sexual activity with two women who are not his wife. Media personality Larry Reid, first reported on his show last Wednesday that he was sent the explicit recordings. The recordings have also been shared on Twitter and YouTube and with The Christian Post.

“This is a sex tape. This is a sexual escapade captured on the phone,” Reid told his audience about the recordings. Holmes, a flamboyant young minister, whom many critics have dismissed as a dangerous departure from orthodox Christianity, has been defended by his followers as “Jesus in the flesh” as he professes healings and “money miracles.”
https://www.christianpost.com/news/texas-prophet-followers-call-jesus-in-the-flesh-shown-in-sex-tape-with-multiple-women.html?fbclid=IwAR11Auk1QIB8RIqlJhf60haKeUfXfpJQJ19shREd1cK6JXRbYHQH86UbbKI

Oh dear. My second fairly recent example comes from Korea. It also involves a “Christian” leader unable to keep his pants on:

The leader of a controversial South Korean church who promoted chastity to his 130,000 followers has been sentenced to 15 years in prison after being found guilty of multiple counts of sexual assault and harassment. Lee Jae-rock, the leader of the Manmin Central Church, who court documents show “deified himself” in sermons, was indicted for 42 counts of sexual harassment and sexual assault against eight victims.

Lee, 75, had “maliciously taken advantage of the victims who had absolute faith in his religious authority, and sexually harassed or assaulted the victims who were in their 20s repeatedly for an extended period and even sexually assaulting multiple victims at the same time,” according to a press release from the Seoul Central District Court.
https://edition.cnn.com/2018/11/22/asia/lee-jae-rock-pastor-indicted-intl/index.html

Oh dear some more. But my next two examples are quite well known, and involve not just the leaders having sex with cult followers, but pushing death as well. And both have been featured in documentaries of late. The American docos have recently been aired here on Australian television, so I watched a bit of each.

In 1993 the Branch Davidian cult led by David Koresh in Waco, Texas was involved in a 2-month siege by the US government. Fearing that the cult leaders had stockpiled a lot of weapons, and was involved in gross sexual impropriety – even with children – among other things, the Federal Government took action.

As with so many cults, they had delusions of grandeur coupled with apocalyptic views of the end of times. The rest is history: tear gas was launched, a major gun battle erupted, and soon the entire compound burned to the ground. Debate still rages as to who actually caused those fires, but the horrible result was this: 76 people died, including Koresh and many women and children.

The Waco cult tragedy was featured in an 8-part doco series. I saw parts of it. Having been in a cult myself, it was interesting viewing. If anything, they featured Koresh as a bit too normal, calm and regular. Cult leaders are usually anything but. And some have criticised the series for being biased towards the cult.

The second older event which was recently featured in a new documentary was the Jonestown tragedy. As many of you might recall, this cult was also involved in some pretty bizarre activities with a pretty bizarre leader: Jim Jones. On November 18, 1978, 909 members of the Peoples Temple living in the Jonestown settlement in Guyana either voluntarily or compulsorily consumed a drink laced with cyanide. A third of the victim of this massacre were children. Shocking stuff indeed.

But as I say, nothing new. History records other such cases over the centuries. Consider just one shocking example of this. It involves a city of 15,000 people in north-west Germany near the Dutch border: Munster. The European Reformation resulted in various splinter groups which both Catholics and mainstream Protestants were greatly alarmed about.

Some of these groups were very extreme indeed. The situation in Munster was one of the most blatant cases of this. Any good book on church history will cover this sad event, but let me mention one source. In his classic 1957 volume, The Pursuit of the Millennium, British historian Norman Cohn details this tragic story.

Very briefly, an Anabaptist group led by Jan van Leiden (John of Leiden), took control of Munster in 1532 and formed a socialistic-type state, proclaiming it the New Jerusalem. But a bit of background. The Dutch Anabaptist revolutionary leader Jan Matthys had a big influence on van Leiden.

After Munster was taken over, Matthys also entered the city. The results of these two radicals being there was bad news. They confiscated all property and burned all books except the Bible. Loyal citizens ran through the streets having visions and were in ecstasy, preparing for the Second Coming of Christ and the start of the Millennium.

Leiden himself ran through the streets naked and fell into a trance for three days. He even proclaimed himself the “king of righteousness” and identified himself as the new king David. Hysteria abounded, and some women claimed apocalyptic visions, throwing themselves on the ground and foaming at the mouth.

The leaders said that the rest of the world was lost, and only at Munster – under their leadership – could people be saved. All “unbelievers” – including Lutherans and Catholics – were exiled or executed. All the remaining “believers” were told that as an indication of their true faith they had to give all their money to the leaders. Polygamy and harems were established, along with forced marriages.

However – thankfully – all this did not last long, and the town was recaptured in May and June of 1535. The Anabaptists were killed and their corpses were exhibited in metal baskets hanging from the tower of a Church. This short-lived experiment in cultic and communistic craziness horrified most Europeans, and the Anabaptists became objects of derision – and persecution.

My point here is not to pick on the Anabaptists. The ones mentioned here were clearly extremists and nutters, while many others for the most part fall into the camp of Christian orthodoxy in terms of beliefs and practices. But when we compare what these extremists did and said with some of the more recent cults and cult leaders, the similarities are obvious.

Among other things, these cults allowed personal experiences and special “revelations” to trump the Word of God. They put inordinate power and authority into the hands of one or a few charismatic leaders. They despised all Christian learning from past and present, and were willing to do the most bizarre and deceptive acts to please their leaders.

And almost of all of these cults got into nutty end-times madness – big time. They were convinced Christ would return at any moment, and they fully believed that they were the only true elect or chosen remnant to be found – everyone else was lost. We see this happening in church history and we keep seeing this happen today.

But the Bible is so very clear on all this. Jesus often warned that we should not listen to anyone who claims to know when Christ will return, or worse yet, who claims to be Christ! And Paul in Acts 20 warned of wolves who would come in to ravage the flock.

As he told the Ephesian elders in verses 30-31: “Even from your own number men will arise and distort the truth in order to draw away disciples after them. So be on your guard!” So many other warnings like this are found in Scripture.

Yet so many cults continue to thrive and so many people – including clueless Christians get sucked into them. As I said, I too was once in a pretty hardcore cult. You can read about my experience here (especially in Parts 2-3): https://billmuehlenberg.com/2012/06/27/coming-home-my-testimony-part-1/

So be forewarned. There is very little of anything new happening today: it has all been done before. And that includes dangerous cults, deceived and megalomaniac leaders, communistic compulsion, millennial madness, and harmful heresies.

9 Replies to “Sex Cults and Killer Cults: Now and Then”