One does not glibly nor lightly quarrel in public with a world-renown theologian. Indeed, when it comes to theological matters, I am more than happy just to walk humbly and cautiously before an esteemed New Testament scholar such as N. T. Wright.

But when Wright wanders into public policy pronouncements, I often find myself screaming, “Wright, how can you be so wrong?” Sadly he can go off the cliff with leftist group-think on various issues instead of offering us critical – and biblical – thinking.

As but one earlier example, he came out saying some really quite bizarre and unhelpful things concerning the death of Osama bin Laden by US forces in 2011. He penned some silliness which reflected the left’s moralism more than the Scriptures’ ethical principles. I wrote an entire piece on that one: billmuehlenberg.com/2011/05/10/not-always-the-wright-stuff/ 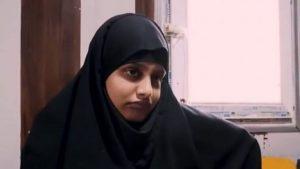 As to his theological views, they are of course not without its critics. I tried to outline some of the main areas of contention in this piece: billmuehlenberg.com/2018/01/08/wright-new-perspective/

But as I say, it is more often his commentary on contentious social and ethical issues that I often find myself at odds with. Consider his recent remarks about an English gal who joined IS to help slay the infidels, but now wants to come back home.

Let me preface my remarks by saying I have spent a fair amount of time looking online for his actual letter, and I am not sure I have seen it in its entirety. I may have, but the London Times website does not allow me to see it. So if there is more to his letter than what I have been able to dig up, I of course cannot respond to that.

Here is background to the story: Shamima Begum fled her east London home to join IS in 2015 when she was 15 years old. A week after she arrived there she married a Dutchman who had also fled the West and joined IS. She had three children, two of whom have died, and now she wants to return to the UK.

Obviously, a big public debate has erupted over this, with many saying (rightly in my view) that a traitor like this who joins a murderous death cult should not be allowed to return. The media has been full of pros and cons on all this.

It seems that one London Times reader, Clive Chafer, sent in a letter saying government ministers should get “a bit of backbone” and bar her from returning. He said that trying to rehabilitate Begum back into UK society would be too costly and risky.

It was to this that Wright sent a letter in response: “As a taxpayer, I can’t fault Clive Chafer’s letter warning against letting Shamima Begum come back home. As a Christian, I cannot help reflecting that if Jesus had thought like that he would never have told the parable of the Prodigal Son, which neatly marks out his teaching both from Islam and from the cold logic of secularism.”

Hmm. So he uses the story of the Prodigal Son to presumably urge the government to embrace her and take her back in. As I say, I am not sure how much more there was to his letter. It seems that at least one more line was involved, since one article refers to it indirectly: “‘We must remember that those who left Britain to join Daesh were full of hate for our country’, he said, according to Sky News.”
naughty-quills.com/2019/02/20/british-govt-to-strip-teen-who-joined-is-of-citizenship/

But based on what I have, this to me is another example of where Wright gets it wrong as he strays into controversial social and political matters. Surely a world-class theologian like this is aware of certain biblical basics. And one such basic is that Scripture of course refers to both a personal Christian ethic, and also a social Christian ethic.

That is, the individual Christian is not the only player here that can act ethically. God of course created other institutions by which he helps to run things in a fallen world. He of course created the state, and he created the church. All three have differing relationships with each other and to ethical matters:

-The individual Christian is a member both of the state and the church.
-How an individual Christian responds to things may well be different from how the state is to respond.
-The roles of the state and church are different, although there is some overlap here.
-The state deals with crime and punishment, while the church deals with sin and forgiveness.
-Not all sins are crimes, and not all crimes are sins.
-Both the Christian and the state have certain obligations that they must carry out.

Confusing the roles and works of all three can often lead to trouble – and an unbiblical view of things. But I have written about all this often now. See for example these articles:

I encourage you to have a careful read of those pieces. But let me try to illustrate in practical fashion how all this might work out. Let’s say I am an English Christian who has a brother who is a peace-keeper in Syria or Iraq. Let’s say that Begum was directly or indirectly involved in having my brother killed while she was with IS.

How should I respond? Well, as a citizen, I would have every right and expectation to see justice carried out and wrongdoing punished. Romans 13 lays out those basic roles of the state. And it is possible that my church might want to take her in – Prodigal Son-style – if it so chose to do so.

But what about me? I of course can choose to personally forgive her for the great evil she was involved in and inflicted on my family (and how many other innocent men, women and children were tortured and butchered by her and/or her Islamist buddies?). But I can also allow the state to do what it should do in terms of justice.

So I could rightly agree with the state that this person not be allowed back in the country, or if it does allow her in, that she be punished to the full extent of the law. After all, she has shown no remorse thus far for any of this. Or I could join the Wrights of the world and speak about the Prodigal Son, etc.

It seems both responses could be acceptable. But again, my point remains: how I respond to her is quite different from how the God-ordained state responds to her. And it seems that Wright and others are quite fuzzy on all this. For example, Christianity Today asked other theologians about their views on this.

Some were equally appalling in my eyes. New Testament prof Gary Burge for example said this:

His father risks everything to do the unexpected and “repatriates” him to his family and village. The principle here is the same. The incoming prodigal needs to meet a community that is courageous, unexpected, and gracious. These would be Christian values at work in public policy and it would be as controversial and unconventional as Jesus was in Luke 15.

Oh dear. No I do not see these two cases as being morally equivalent – not even close. Thankfully some others who were asked about this got things a bit better. Martin Accad pointed out some obvious differences:

I am not sure I agree to compare Begum to the prodigal son. It is clear in the parable that the prodigal son was “repentant” and came to his father for forgiveness, believing he did not even deserve it. In Begum’s case, according to reports in The Guardian, she is not repentant and only wants to return to give birth to her child and receive government support. This is quite an abusive position, very different from the parable of Jesus….

And Elizabeth Oldfield said in part:

Do not seek vengeance, it is mine to avenge, says the Lord, after all. Should Begum or Muthana [an American in similar circumstances] be a friend or family member of ours, the commandment would be clear. The state however, is another matter. Mercy and forgiveness are key themes, but so is justice. And when Scripture talks about the responsibility of a good state, justice is central. Scholars of all political persuasions agree that if you can extract one directly applicable political lesson from the Bible, it’s the need for access to justice.

The myriad victims of ISIS’ brutality, to which these two contributed, will likely never see most of their tormentors face justice. With these two women they can. Not as vengeance, cast out into the stateless darkness, but repatriated and tried. Though we can forgive, the victims if they wish can forgive, the state can and should not. That’s not its job.
www.christianitytoday.com/ct/2019/february-web-only/isis-bride-shamima-begum-hoda-muthana-prodigal-son-wright.html?utm_source=ctweekly-html&utm_medium=Newsletter&utm_term=17195879&utm_content=637992418&utm_campaign=email

As mentioned, if Wright had more to say about this case than what I have quoted, I look forward to seeing it. But too often we simply get rather emotive social justice-type responses to these matters when a bit more biblical and moral clarity is in order.

Islamic terrorism is real, and we need to hear the voices of their victims, not just a London gal who now wants to just go back to her old life and pretend nothing has happened. Indeed, with no remorse, how do we know that she will not go on to take part in acts of terrorism in her home country?

Sorry, but offering rather glib references to the Prodigal Son parable just does not seem to really cut it here.