That the West has a schizophrenic view of children and their wellbeing is an understatement. We go on and on about not separating children from their parents, as in debates over refugees and asylum seekers, but we extol as a human right the slaughter of unborn children. Um, it makes no sense to be pro-child in terms of immigration while at the same time celebrating things like abortion.

There are so many other areas in which we put children at the end of the line, even though we claim to have their best interests at heart. The entire push for all parents to be in the paid workplace, and simply leave our kids to be raised by strangers, is a massive part of this.

We think our kids are resilient and can somehow thrive while spending 8-12 hours a day, 5-6 days a week, in some day care centre. And we have managed to convince ourselves that we can do this basically from day one of the child’s life. 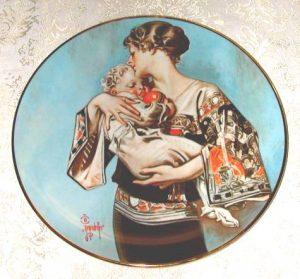 Let me offer one clear illustration of this which just occurred hours ago. I was once again standing in line at a local Post Office. I am convinced that the main service a Post Office offers is not to sell you stamps or mail your parcels, but to get you to stand in long lines for as long as possible – but I digress.

As I awaited my turn, two parties in front of me started up a conversation. A youngish woman was standing behind a younger couple with a baby in a pram. The woman asked how old the baby was. ‘Sixteen weeks’ replied the couple. The woman said she had a 14-week old child.

But then she said she went back to work six or eight weeks ago (I forget which). The couple was a bit taken back, with the father saying, ‘that’s a bit young’. However, the mother quickly and cheerily replied: ‘Well, I just bought a new house and a new car. I have to pay them off.’

From what I could gather she may have been a single mum as well, and day care was her remedy for getting back into the paid work place. So there you go: a baby that is barely a month old is pushed off into day care to be raised by complete strangers so that mum can make more money.

Now I am not picking on this particular mother – there would be millions more just like her in the West today. And the need to earn an income is not being disparaged here. Even if she is not a single mum, but has a husband – or a partner – one must ask why government policies tend to penalise single-income families.

Why is it becoming more and more difficult for a family to survive without having both parents in the paid workplace? But I have long ago addressed these sorts of issues. See this article for example: billmuehlenberg.com/2008/05/29/home-truths-about-working-families/

But what this mother was doing is an all-too familiar practice now, urged on by feminists for well over a half century. The line being sold to all Western women is this: the only good woman is a career woman. A stay at home mother is a second-class citizen who is wasting her life. Only those in the paid workplace are real, liberated women – all the rest are slaves and dupes.

This propaganda has become the accepted wisdom, and stay at home mums really are treated as social pariahs nowadays. And as mentioned, this shows the schizy mindset we have: we say we want what is best for our kids, but we usually do what is worst for them.

Indeed, the debate over paid day-care has raged for many decades now. So many experts have done careful studies on the overwhelming importance of mother-child bonding, and how absolutely essential this is for the child’s optimal development – certainly for the first year, if not for the first three years.

But all that is being denied most children today. How very few mothers there are who know the value of being with their children at these important stages of their lives. Most women – and men – have sadly bought the feminist indoctrination which declares that the most important thing is for them to get straight back into the workplace – and baby will be just peachy.

But the research on this tells us otherwise. This too I have documented for many years now. Let me quote from one of my earlier pieces – a book review:

What about the effects of day care on children? Is it really harmless? Hunter examines a number of studies which show that children who are abandoned physically and emotionally in their formative years are subject to a host of problems. Studies by such international experts as John Bowlby, Michael Lamb, Jay Belsky and M.D.S. Ainsworth have shown that children who spend a good deal of time away from their mothers in the first several years of life develop a number of emotional/ psychological problems which plague them throughout life.

A child’s self-esteem, security and sense of worth are all negatively affected as a result of separation from its mother, especially in infancy. Moreover, one’s view of motherhood and family is strongly shaped by the treatment one receives as a young child.
billmuehlenberg.com/1991/03/10/a-review-of-home-by-choice-facing-the-effects-of-mothers-absence-by-brenda-hunter/

And in another piece I quoted from child expert Penelope Leach:

“However carefully she is fed, washed and protected, and however many mobiles are hung for her, a baby’s overall care is not good enough to ensure her optimal development unless she is constantly with people who know her as an individual and who always have the time (and usually the inclination) to listen to and answer her; to cuddle and play, show and share. These are the people she will attach herself to and that attachment matters.”

One mother expressed this well when she said recently:

While I – and most of my friends – were saying our minds were ‘too good’ to stay at home and raise our children, none of us ever asked the question, ‘Then what sort of minds should be raising our children – minds that were not very good?’ My carefully worded advertisements for childcare literally came back to haunt me. . . . I wanted someone who would encourage my children’s creativity, take them on interesting outings, answer all their little questions, and rock them to sleep. I wanted someone who would be a ‘part of the family.’ Slowly, painfully, after really thinking about what I wanted for my children and rewriting advertisement after advertisement, I came to the stunning realization that the person I was looking for was right under my nose. I had been desperately trying to hire me.

Or as anthropologist Margaret Mead once noted concerning the radical shifts that must take place to break the mother-child bond:

The mother’s nurturing tie to her child is apparently so deeply rooted in the actual biological conditions of conception and gestation, birth and suckling, that only fairly complicated social arrangements can break it down entirely. . . . Women may be said to be mothers unless they are taught to deny their child-bearing qualities. Society must distort their sense of themselves, pervert their inherent growth-patterns, perpetuate a series of learning-outrages upon them, before they will cease to want to provide, at least for a few years, for the child they have already nourished for nine months within the safe circle of their own bodies.
billmuehlenberg.com/1998/04/30/questions-about-child-care/

Just moments ago I overheard on the evening news yet another story about which political party spends more on day care. No one – not even conservative parties – seem to give a rip about the overwhelming importance of mothers and motherhood. But we snub them and devalue them at our own peril, as I documented here: billmuehlenberg.com/2009/05/05/the-importance-of-motherhood/

One of the most important quotes on this matter comes from social analyst Peter Drucker who said some decades ago, “We are busily unmaking one of the proudest social achievements in the nineteenth century, which was to take married women out of the work force so they could devote themselves to family and children.”

11 Replies to “Children Go to the Back of the Queue”