OK, these are certainly some rather large topics that I am attempting to cover in a very short article. But it follows on from a piece I penned yesterday on the absence or silence of God. In it I mentioned that most believers experience times of when it seems God has abandoned them, or is aloof and silent.

You can see that piece here: billmuehlenberg.com/2019/03/28/divine-hiddenness-on-gods-silence/ 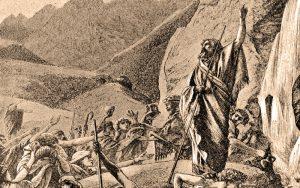 Toward the end of that article I mentioned that other matters deserve further attention, such as the issue of unanswered prayer and the like. That too is something all believers likely have experienced on occasion. Plenty can be said about these sorts of issues, including ensuring that our prayers are in alignment with the will of God.

But here I focus on a related matter: the idea of making demands of God, of imposing on God, and of basically snapping our fingers and expecting God to jump. There is clearly danger in this approach. Faith can often be confused with presumption, in other words, and we may expect that God must always act – and act immediately – even on something he has said in Scripture he desires to perform.

One clear example of this comes from the positive confession movement, or the name-it-and-claim-it theology, or the Word of Faith camp. Many in this movement have basically developed a ‘theology of command and demand’. As just one example, a key player in this, Charlie Capps said in his 1978 book, Releasing the Ability of God: it is “so necessary for us to speak what we desire. We are giving orders”.

Plenty of others could be quoted here saying similar things. While such an approach may seem to indicate a high level of faith and authority, it can easily slip into what Scripture refers to as ‘putting God to the test’. Scripture warns of this often.

One good example of this is the incident at Massah (from the Hebrew word nissah, which means testing) as recorded in Exodus 17:1-7:

The whole Israelite community set out from the Desert of Sin, traveling from place to place as the Lord commanded. They camped at Rephidim, but there was no water for the people to drink. So they quarreled with Moses and said, “Give us water to drink.” Moses replied, “Why do you quarrel with me? Why do you put the Lord to the test?” But the people were thirsty for water there, and they grumbled against Moses. They said, “Why did you bring us up out of Egypt to make us and our children and livestock die of thirst?” Then Moses cried out to the Lord, “What am I to do with these people? They are almost ready to stone me.” The Lord answered Moses, “Go out in front of the people. Take with you some of the elders of Israel and take in your hand the staff with which you struck the Nile, and go. I will stand there before you by the rock at Horeb. Strike the rock, and water will come out of it for the people to drink.” So Moses did this in the sight of the elders of Israel. And he called the place Massah and Meribah because the Israelites quarreled and because they tested the Lord saying, “Is the Lord among us or not?”

By demanding water from Moses, they were reflecting not just a real physical need, but a deeper discontent. John Durham notes that “there can be no doubt that more is involved in the general dissatisfaction of Israel than water and food, as important as these necessities of life are”. Indeed, “their dissatisfaction with Moses is an attack on Yahweh… The point is that with Moses’ authority under question, so also is Yahweh’s.”

Victor Hamilton in his commentary on Exodus quotes two other voices on how serious this matter really was. First, J. Gerald Janzen: “To test God is to pose an ultimatum in which we decide what shall count as evidence of God’s presences, and then decide on God’s presence or absence on the basis of whether God has met the test we have posed.”

Next, Terence Fretheim. Testing God is “seeking a way God can be coerced to act or show himself. It is to set God up, to try to force God’s hand in order thereby to determine concretely whether God is really present or not.” Or as Hamilton writes: “In essence, testing God is demanding that he jump through our hoops and make himself answerable and accountable to us. Sovereignty passes to us.”

Israel’s doubts about, and rebellion against, Moses (and by implication, Yahweh), are not only recorded here in a very stern light, but are elsewhere held up as an example of outright disobedience and rebellion. In Deuteronomy 6:16, for example, Moses recalls the incident, while stressing the importance of remembering (Deut. 6:10-25): “Do not put the Lord your God to the test as you did at Massah.”

As J. A. Thompson puts it in his commentary on Deuteronomy, “To test God is to impose conditions on Him and to make His response to the people’s demand in the hour of crisis the condition of their continuing to follow Him. . . . By doubting God’s sovereignty in the hour of need or crisis, the people sought to gain the initiative and to compel God to prove Himself to them by spectacular deeds which they themselves had proposed (cf. 1:19-46). In His day Jesus refused to offer signs to the scribes and Pharisees.

Jesus indicates the depth of his meditation on this chapter when he quotes this verse in response to Satan (Matt. 4:5-7). The suggestion that he should “prove” God’s protective commitment to him by jumping off the temple in Jerusalem when he still had ringing in his ears the voice of his Father God, with its combination of recognition, approval, and commissioning, was rightly resisted as utterly out of line with the command of Deuteronomy 6:16. Where Israel, God’s first-born son (Exod. 4:22), had so often distrusted and disobeyed, in spite of spectacular demonstrations of God’s benevolence, the Son of God would trust and obey.

Much of the language and theology of the positive confession movement sounds quite close to what Moses has clearly warned Israel against. And the New Testament also warns about putting God to the test. For example, we find this in Hebrews 3:7-9 (quoting from Psalm 95:7-11):

“So, as the Holy Spirit says: ‘Today, if you hear his voice, do not harden your hearts as you did in the rebellion, during the time of testing in the desert, where your fathers tested and tried me and for forty years saw what I did’.” The book of Hebrews is full of warnings, and here he reminds believers not to be like the Israelites of old, who because of unbelief and disobedience did not enter into the promised Land.

Finally, one is reminded of the Third Commandment in this context. The abuse of God’s name (taking it in vain) can imply many things, but surely one aspect of it includes this ‘name-it-and-claim-it’ mentality which seems to say that we can ask (command) God for anything and expect to receive it if we simply invoke his name.

As Duane Christensen reminds us, the “implications of the third commandment ([Deut.] 5:11), concerning misuse of Yahweh’s name, reach far beyond the sphere of magic. Any attempt to manipulate God for personal ends is included. Thus, the name of God may be misused even in prayer when directed toward selfish human ends”.

One could spend more time on how some forms of the name-it-and-claim-it teachings border on the unbiblical, even the pagan. Christians making demands on God often differ little from those who practice pagan magic. Philip Yancey in his volume Reaching For the Invisible God notes that sociologist Bronislav Malinowski drew a distinction between magic and religion: “In magic, people try to get the gods to perform their will, while in religion people try to conform to the will of the gods.”

But let me wrap things up here. The Word of Faith movement is not alone in this potential abuse of God’s name. Many evangelicals can be guilty of this as well. Indeed, as Christensen continues, “it is not just ‘TV evangelists’ in their concern to meet the high financial costs of their chosen medium who succumb to the temptation to violate the third commandment. At virtually all levels of religious organization the seductive demands of power tempt us to use the name of Yahweh for personal advantage.”

So we all must take great care here. It is one thing to seek to exercise strong, vibrant faith. But we must not let such faith become a means by which we seek to manipulate God and force things out of him. He is sovereign, and we are not.

And it is not so much a matter of our great faith in God, but our faith in a great God.