We now live in such dark and diabolical times that we have to seriously ask ourselves if even authors like Orwell and Huxley would be shocked at what is now happening in our culture. As prescient and prophetic as Nineteen Eighty-Four and Brave New World were, it seems we are now moving well beyond the horrors envisaged there.

Consider briefly the issue of Islam. Western leaders are falling over each other in seeing who can appease this political ideology the most, and assure us that it is a religion of peace. At the very same time they are trying to convince us that the really evil and dangerous religion is Christianity. 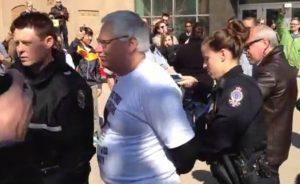 One recent case demonstrates this quite clearly: Britain’s Home Office denied an Iranian Christian an application for asylum, claiming Christianity is violent! Yes, they really did say that.
pjmedia.com/faith/uk-gov-quotes-bible-to-prove-christianity-is-not-peaceful-denies-iranian-christian-asylum/

But it is on the hype-radicalised sexual front that we especially see this being played out on a daily basis. The homosexual and transsexual activists are having a field day, and they have managed to fully co-opt the state to do their bidding, hunting down and punishing anyone who dares to differ with their biology-denying agenda.

Consider this scary March 19 headline: “Police Question UK Journalist for ‘Misgendering’ a Transgender Woman.” So the police are now spending time chasing up folks who prefer to stick to reality and biology? Forget about the rapists and bank robbers – we obviously have something far more sinister here that must be investigated. The story opens:

A Catholic journalist in the United Kingdom faces legal trouble and potential jail time for “misgendering” a 25-year-old transgender woman. Caroline Farrow, the journalist, said Monday that the mother of the transgender woman had reported her for the offense.

“Had a message from Guildford police tonight about my tweets following an appearance on [‘Good Morning Britain’] with Susie Green and Piers Morgan,” Farrow said in a tweet. “Susie Green has reported me for misgendering her daughter.” Guildford is a town in Surrey, England, about 25 miles southwest of London. Morgan is one of the hosts of “Good Morning Britain,” a television show on the ITV network that originates from London.

Farrow, a broadcaster, media commentator, and public speaker who has appeared on BBC and Sky News, said that all she was told by police after she went on “Good Morning Britain” in September is that she “made some tweets misgendering Susie Green’s child and that I need to attend a taped interview.”
www.dailysignal.com/2019/03/19/police-question-uk-journalist-for-misgendering-a-transgender-woman/

Wow. David Robertson notes how Jordan Peterson was just given the flick by the University of Cambridge, and rightly offers this comment:

The question at issue here is not whether you agree with either of these positions, but whether you are permitted to say what you think without attracting police attention! The bottom line is that today in modern Britain we have a journalist being investigated by the police because someone complained that what she wrote was hurtful. The fact that this story comes just days after a street preacher was wrongfully arrested shows how this is becoming a very serious problem in our society.
theweeflea.com/2019/03/23/jordan-peterson-caroline-farrow-jayne-ozanne-and-the-death-of-free-speech/

Exactly. But all this is now becoming the new normal. Every day we find normal citizens being harassed and targeted by the authorities because they actually still believe that biology is real, and that reality is worth running with instead of fantasy.

I have already featured many dozens of such shocking cases on this site, and they keep on coming. I have often mentioned just how out of control the biology-denying trans agenda is getting in Canada, and the most recent case from there should send shivers down the spine of any concerned citizen.

And this case involves someone I do know, at least via the social media. Check out this Orwellian headline: “Court orders Christian to pay $55,000 to trans politician for calling him ‘biological male’.” Did you get that? Dare to call a person by their proper sex, and the Canadian government will go after you like you are a child rapist. The story opens:

A B.C. human rights tribunal has ruled that a Christian activist discriminated against a man who claims to be “female” by distributing flyers that referred to the man, who was running for political office at the time, as a “biological male.” The court ruled for transgender activist “Morgane” Oger, born Ronan Oger, and against Christian activist Bill Whatcott by declaring it’s discriminatory not to accept transgender people as the gender they claim to be.

In a 104-page ruling released Wednesday (read full ruling below), the tribunal further declared there’s no room for any public debate in the matter, according to the Vancouver Star. The tribunal also ordered Whatcott to pay Oger $35,000 in compensation for injury to his “dignity, feelings and self-respect,” and an additional $20,000 to Oger for Whatcott’s alleged improper conduct during and before the hearings, it reported.

Thankfully Whatcott has not buckled to this Big Brother madness:

Whatcott, 52, described the tribunal hearing as a “kangaroo show trial” and said he’s not surprised by the decision.
“Jesus Christ is still Lord and he will come again, I put my hope into that,” he told LifeSiteNews. John Carpay, president of the Justice Center for Constitutional Freedom, which intervened in the case, decried the ruling as harming democracy.

“The Supreme Court of Canada has long held that freedom of expression is the lifeblood of democracy,” Carpay said in a press release. “Society is full of people with diverse views and the Tribunal’s decision undermines the foundational principles of the free society and jeopardizes the health of Canada’s democracy,” he said.
www.lifesitenews.com/news/court-orders-christian-to-pay-55000-to-trans-politician-for-calling-him-biological-male

Wow again. What sort of madness is this? A guy gets his feelings hurt over being called a guy, and now a Christian must pay – big time. I repeat: would Orwell or Huxley ever have imagined that things would get this bad? Yes, they foretold a time when reality would be denied and lies would become truth.

But that was mainly due to coercion, state compulsion, and even torture. Recall this gruesome scene from Nineteen Eighty-Four, the dystopian novel which appeared 70 years ago. The hero Winston is being tortured by O’Brien of the State to get him to deny reality:

O’Brien held up his left hand, its back towards Winston, with the thumb hidden and the four fingers extended.

‘How many fingers am I holding up, Winston?’

‘And if the party says that it is not four but five — then how many?’

The word ended in a gasp of pain. The needle of the dial had shot up to fifty-five. The sweat had sprung out all over Winston’s body. The air tore into his lungs and issued again in deep groans which even by clenching his teeth he could not stop. O’Brien watched him, the four fingers still extended. He drew back the lever. This time the pain was only slightly eased.

The needle went up to sixty.

The needle must have risen again, but he did not look at it. The heavy, stern face and the four fingers filled his vision. The fingers stood up before his eyes like pillars, enormous, blurry, and seeming to vibrate, but unmistakably four.

But today the state torturers are not really even needed. Except for a few brave souls like Caroline Farrow and Bill Whatcott, most folks have already caved in to the new trans fascism. They willingly go along with all the madness, preferring to deny biology and reality rather than stand against the PC brigade and the coercive state.

Big Brother has won. It is only a matter of time before the few remaining recalcitrants are rounded up and dealt with by the State. I for one have been warning about this for years now. Soon enough they will take down this site and that may be the last you will hear from me.

I am dead serious. But until that happens I will keep sounding the alarm and hope and pray that a few more folks wake up before it is too late. And speaking of prayer, please keep Farrow and Whatcott in your prayers. They sure do need it right now.

21 Replies to “Transtopia: You WILL Deny Reality, Or Face the Consequences”