I have met Abby Johnson, the former abortionist and Planned Parenthood clinic director. She certainly is not the evil person many try to make her out to be. But you would think she is a really horrible person, given the reaction to a brand-new movie about her life.

The film Unplanned hit the cinemas in America this weekend, and all hell has broken loose because of it. The truth is, all the dirty little secrets of the abortion industry are being exposed in this important film. Moreover, the incredibly powerful and influential Planned Parenthood organisation is being shown up for what it really is: a ruthless international killing machine. 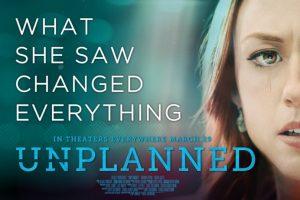 Abby Johnson spent eight years as one of the youngest clinic directors for Planned Parenthood, joining them in 2001 when she was just 21, and working there for eight years. She was proud to be “helping” women and was so good at her work that she actually helped facilitate 22,000 abortions.

But all that changed on September 26, 2009. On that day she had to participate in an abortion and it changed everything. As I wrote back in 2011:

Strange as it may seem, for the eight years of her work there, she had not actually witnessed one. But when she was asked to help out, she got the shock of her life. She held the ultrasound while the doctor joked “Beam me up, Scotty” as he rotated the cannula, a straw-shaped instrument attached to the end of a suction tube. She could “see the tiny body violently twisting with it. For the briefest moment it looked as if the baby were being wrung like a dishcloth, twirled and squeezed. And then the little body crumpled and began disappearing into the cannula before my eyes.”

She realised that she had “just participated in a death. A death. Not a medical procedure. Not a surgical solution to a life problem. Not the valiant step of a woman exercising her right to make medical choices about her own body. The death of a helpless baby, a baby violently ripped away from the safety of the womb, sucked away to be discarded as biohazard waste.” All this burst her bubble, or rather, her steel cage that she had erected around herself. All the secrets, and guilt, and angst that she bottled up for years were now starting to pour forth. The scales fell from her eyes as she realised she had been believing lies and living a lie.

She left Planned Parenthood and soon became a committed activist for life. In 2011 her story appeared in the book, Unplanned. My review of it is found here: billmuehlenberg.com/2011/02/04/a-review-of-unplanned-by-abby-johnson/

And that brings us to the film, Unplanned. Johnson now helps abortion workers with her ministry, And Then There Were None. Because of this work some 500 workers have left the industry. Says Johnson:

“As of now, we have helped 487 workers leave the clinics and … those workers have closed 21 abortion facilities because they’ve worked with state officials. They have worked with health departments to go in and close those facilities because of bad practices, medical negligence, whatever it may be.”
www1.cbn.com/cbnnews/2019/march/ex-planned-parenthood-director-reveals-the-shocking-moment-she-fled-her-clinic-mdash-and-never-looked-back

Her amazing story is now available in the new film, but as can be imagined, there have been plenty of problems along the way. The truth about abortion is always something the pro-death side does not want to get out to the general public.

Those involved in the film were fully expecting a PG-13 rating, so that teens especially could be able to see the film. They were rather shocked when the movie industry slapped an R rating on the film, making it much harder for young people to see it, and scaring away many Christian viewers as well.

As to the actress who plays Abby Johnson, Ashley Bratcher, she has also had a change of heart. Just a year ago she was on the fence about abortion, but now she is solidly prolife. She is now a feisty activist for the cause of life. As just one example, dozens of Hollywood lefties and celebs have threatened to boycott Georgia because of some prolife legislation recently passed there.

Actress Alyssa Milano tweeted, “There are over 20 productions shooting in GA & the state just voted to strip women of their bodily autonomy. Hollywood! We should stop feeding GA economy.” To which Bratcher replied:

I’m incredibly proud of my home state for taking a stand in the fight for life amidst backlash and dubious threats. In Georgia, we care just as much about being pro-life as being pro-film. We don’t believe in putting a price tag on the value of a human life. You want a working environment that is safe, respectful, tolerant and full of love? I know a place just like that and I call it home. Women do not seek abortions because they feel strong or empowered, they seek them because they are scared. They seek abortions because society and the new-age feminist movement perpetuates the lie that women cannot be successful and be mothers. Those of us on the other side of the fence are here with open arms saying, ‘Yes, you can!’
www.westernjournal.com/ct/unplanned-star-hits-back-hollywood-boycott-threat-fantastic-response/?utm_source=facebook&utm_medium=teaparty&utm_campaign=ttp&utm_content=2019-03-30&fbclid=IwAR1KMCqkajPnMx5rt9HZ3hWMxm5OGLSivRh45LnxgCd2gK9KKXeJg2oUxC0

So the film has certainly changed Bratcher’s life, and it is hoped that it will change the lives of millions who go to see it. But that has been problematic all along, since the other side is doing all it can to prevent people from doing so – at least easily. The R rating is just one indication of this.

Another problem is how most of the major American television networks are effectively censoring the film and any news about it. Only the conservative Fox network has advertised it, promoted it, and featured those involved with the film on their shows. And Twitter has just censored the film as well. As Todd Starnes explains:

A new pro-life film that tells the story of former Planned Parenthood director Abby Johnson is facing massive backlash from Hollywood, the Mainstream Media and social media platforms…. The movie’s official Twitter account was briefly suspended on the day the film opened in theaters. No reason was given but after a tremendous uproar among pro-lifers, the account was later reinstated.

“It is a sad time we live in when corporations can remove individuals’ freedom of speech at will. When did we empower these corporations to have such authority? More importantly, why do we empower them to do so?” Cary Solomon, the co-writer and co-director of the film, said in a statement to The Hollywood Reporter.
www.toddstarnes.com/faith/suspended-unplanned-movie-blackballed-by-twitter-networks/?fbclid=IwAR33mtUxec6YLCvhTPJJN7w5dp_3ddjZWgU64XbPdtEazhgO9VS42sZ69fw

The side that promotes death does NOT want you to see this film. They know that too many people will have a radical change of heart and mind if they do. As I said at the end of my book review:

Everyone needs to read this story, and then pass it on to others. It is an inspiring and riveting account of the most pressing moral struggle of our age. It is a story of hope, of grace, of forgiveness, and of new beginnings. That a God of love and grace can forgive, transform and use a woman with so much blood on her hands is simply remarkable. Simply to read the closing words is worth the price of the book. Abby now often stands on the other side of the fence, outside her old clinic, telling scared young women, “Hi, I’m Abby Johnson, and I used to run this clinic. We can help you”.

And now I have to add: Everyone needs to see this movie. Of course getting to it in some places may be difficult. I am not yet aware if the film will be readily available in Australia. If you know any details about this, please let us know. In the meantime, American friends who have seen it have been powerfully moved and impressed. As one friend said:

We saw the movie “Unplanned” today. It’s an amazing insider’s view of Planned Parenthood and the true story of Abby Johnson, a former PP director in Texas. You can track her own life story and how she had a revelation of life in the womb. Abby has now started the organization, “And then there were none” to reach out to abortion clinic workers with prayer, healing, and practical assistance. It was difficult to watch some parts but this movie shows the truth about the process people go through at Planned Parenthood and other places. I’m committed to pray regularly on site at our local PP clinic.

The powerful 2 ½ minute trailer of the movie can be seen here: www.youtube.com/watch?v=gBLWpKbC3ww&feature=youtu.be&fbclid=IwAR0o2e9r9wtM4EMEtttUz22BXMX2iEIUD-F687tbk-M1G7l0zbeKl_iiTy4

A brief interview with both Johnson and Bratcher is found here: www.youtube.com/watch?v=MSTi4JOnDcQ

Those in the US can find the cinemas, dates and times to see the film here: www.unplannedfilm.com/

21 Replies to “The War Against Unplanned”