Most people do not think ahead, do not look at the big picture, and do not consider the long-term. Most at best are only thinking ahead to what they will have for dinner, or what fun they will get up to on the weekend. Sadly many Christians can be included in this myopia and lack of vision. I already wrote about this in terms of the culture wars: billmuehlenberg.com/2016/04/18/big-picture-long-term/

Here I want to discuss this in terms of the mega-spiritual struggle we are all involved in. Most Christians are aware of the “world” and the “world-system” and how this opposes Christian values and beliefs. But when we turn to the book of Revelation we find a number of terms and concepts which also deal with all this. 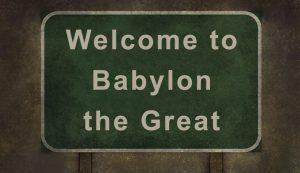 We read about Babylon, or mystery Babylon, about various beasts, about various women, including Jezebel, about the great harlot, etc. Many evil individuals or forces are discussed. And recall that the book itself does NOT mention the Antichrist specifically (that term is only found in 1 John 2:18, 22; 4:3 and 2 John 1:7).

By any standard the book of Revelation is admittedly very difficult to interpret, and it may be better to view these various evil creatures and beings as institutions instead of individuals, as empires as opposed to emperors. They are symbolic representations of evil powers and demonic realities.

Consider Babylon for example. Yes there was an actual Babel and its tower (Genesis 11); the Babylonian empire which God used to judge Israel; and the Roman empire which can be seen symbolically as a type of Babylon, etc. But just as Jerusalem can represent more than an actual city, but a whole way of life, so too Babylon.

As James Montgomery Boice wrote in his 1996 book, Foundations of God’s City:

In both the Old and New Testaments both Babylon and Jerusalem take on more than life-size dimensions and become symbols of two entirely different relationships to God and ways of life. Babylon stands for earthly relationships and an earthly way of life. Jerusalem stands for spiritual realities, and God is its life. This was true of the earthly Jerusalem only at its best and in part. But it becomes so in full measure when the new Jerusalem rises on the ruins of the old.

Or as William Dumbrell puts it:

Thus Babylon and the new Jerusalem represent the two alternatives for humankind. Babylon is the satanic dominated parody of the ideal city/civilization, the earthly counterpart of the new Jerusalem. . . . Babylon simply symbolises human lust for deification. Babylon is an idolatrous city-world, opposed to God, consumed with itself, and a ‘brothel’ for kings and merchants.

He further comments on the makeup of Babylon and its fall:

In a world controlled by divine order, it is inevitable that – given the pernicious nature of her influence through wealth and sensuality (18:3) – Babylon must fall. Babylon’s idolatrous and seductive social, economic, and moral actions will bring about her fall. Babylon’s blatant paganism will bring about her fall. And the leaders and peoples of Babylon’s world will fall with her. Indeed, all the Babylons throughout history must fall (cf. Isaiah 21:9). It is remarkable that divine patience permits the Babylons of history to endure until they collapse under the weight of their own excesses.

In his brand-new book on Revelation, Brian Tabb says this about Babylon and what it represents: “Babylon is not simply a cipher for Rome but is a rich biblical-theological symbol for the world’s idolatrous, seductive political economy – the archetypal godless city, which Rome symbolised in the first century. Babylon’s dramatic demise represents the culmination of God’s judgment on ungodly human society, beginning with Babel (Gen. 11:1-9).”

Thomas Torrance puts it this way:

Babylon always refers to world power closely tied up with the image of the beast. It is a power that is born of spiritual wickedness in high places, a power that flirts with all the rulers and kings and potentates of the earth, and that binds the nations of the world into one empire opposed to the Kingdom of God. Babylon is, in fact, an imitation Kingdom of God, based on the demonic trinity. Ostensibly, Babylon is a world-wide civilization and culture, magnificent in her science and arts and commerce, but it is drugged with pride and intoxicated with its enormous success. At the same time it is a strange mingling of world power and religion, of paganism and Christianity, which becomes the greatest hindrance to the Christian Gospel.

And G. K. Beale looks at the historical pattern here. He comments:

Babylon was the ungodly world power under which Israel had to live in captivity. While Israelite saints did not go along with Babylon’s religious practices, they were nevertheless tempted to compromise. When they remained loyal to their God, they underwent trial by their oppressors (see Daniel 1-6). The ungodly social, political, and economic system dominated by the Roman Empire placed believers in the same position as Israel was in under Babylon. Just as Babylon destroyed the first temple and sent Israel into exile, so Rome came to be called “Babylon” in some sectors of Judaism because it also destroyed the temple in Jerusalem and exiled Israel.

Therefore, here in the Apocalypse Rome and all wicked world systems take on the symbolic name “Babylon the Great.” Indeed, this symbolic interpretation of Babylon is assured beyond reasonable doubt by the prophecies of God’s judgment on historical Babylon, which foretold that Babylon “will be desolate forever” and “not rise again” (Jer. 28:39; 50:39-40; 51:24-26, 62-64; so also Is. 13:19-22).

And he points out the economic and commercial aspects of all this:

Many go along with the religious and idolatrous demands of the ungodly earthly order. This compliance is explained in the identification of Babylon as “she who made all the nations drink from the wine of the passion of her intercourse.”… The nations’ cooperation with Babylon ensures their material security (cf. 2:9, 13; 13:16-17). Without this cooperation security will be removed. Such security is a temptation too great to resist….

Babylon’s promise of prosperous earthly welfare for its willing subjects is an intoxication that the majority of the world’s inhabitants also want to imbibe. Once one imbibes, the intoxicating influence removes all desire to resist Babylon’s destructive influence, blinds one to Babylon’s own ultimate insecurity and to God as the source of real security, and numbs one against any fear of a coming judgment.

So what is my point in all this? Is it just more abstract speculation about end-time events? No, it is very practical and concrete truth about the culture we NOW live in. We ARE living in Babylon. The entire Western system, as good and great as it has been in the past, is quickly becoming everything we find being denounced in Revelation.

When we have most of the media, commerce, politics, culture, and entertainment all warring against Christian values and practices, and against the things that God so very highly values – such as the sanctity of human life, the importance of marriage and family and godly sexuality, etc. – then you know we are living in a Babylon culture.

This is much, much bigger. It is part and parcel of a mega-spiritual war taking place. And all the imagery and symbolism of Revelation perfectly depicts what is really going on here. I quite like what Dennis Johnson writes in his 2001 book, Triumph of the Lamb:

Revelation repeatedly reminds us that people and institutions are not as they appear to our eyes. We must look beyond the surface of the page to discern the realities that explain history’s events and our experience. Revelation calls the church, Jesus’ witness, to exercise wise discernment, lest we be taken in by an impressive image that marks an ugly and empty reality. . . . Revelation reminds us of the ugly underbelly of even the best of merely human institutions, and its visions call Christ’s servants to heed the psalmist’s wise counsel: “Do not trust in princes, in mortal man, in whom there is no salvation” (Ps. 146:3).

They are all symptomatic of Babylon in our midst – the evil and demonic world system that is warring against the church and everything God and his people stand for. It really is a cosmic conflict. It is a life and death battle between good and evil, between God and the devil.

And as Beale pointed out, much of this seduction of Babylon has to do with social and economic security. If we bow down to this satanic counterfeit, we will be looked after. But if we resist, there will be very real penalties. How many times now have I documented cases of people losing their jobs or being fined or jailed for refusing to go along with the radical leftist agenda?

How often have I said that Christian schools and other religious bodies need to stop their dependency on government funding. So often those sucking on the government teat have compromised big time to keep the money coming. This is what Babylon is about, as Beale rightly explained.

And the biblical message is always the same, when it comes to Babylon. As William Hendriksen reminds us:

The admonition to leave Babylon is addressed to God’s people in all ages (cf. Is. 48:20; 52:11; Je.50:8, 41-44; Zech. 2:7). From this fact it appears that Babylon is not only the city of the end-time. It is the world, as the centre of seduction, in any age. To depart from Babylon means not to have fellowship with her sins and not to be ensnared by her allurements and enticements. Those who set their heart on the world shall also receive of her plagues.

Thankfully we know who wins in the end. And Revelation makes it clear that those who overcome with God’s help will enjoy the true city and what it represents, the new Jerusalem. The counterfeit city, imaging Satan and his values, will fall. And there will be rejoicing in heaven because of its fall (Rev. 19).