But when your team seems to walk and talk pretty much like the other team, then some probing questions and some constructive criticism is certainly necessary. I refer to the scene here in Australia, and the fact that we have a federal election in just over two weeks. 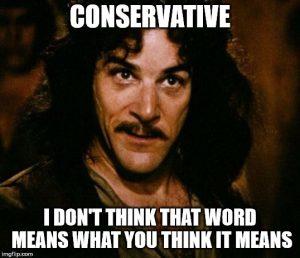 I am fully aware that probably 98 per cent of all politicians will normally – even routinely – put political expediency ahead of primary principles. Most have as their number one goal simply to get elected – or re-elected. Thus they tend to say and do whatever is necessary to get to have that happen.

Sadly our so-called conservative politicians can be as guilty of this as the leftist ones. The Liberal Party is supposed to be – at least to a certain extent – Australia’s conservative party. But far too often it seems to be anything but. Far too often its leaders and most of its team seem to be little more than Labor-lite.

The things that concern many real conservatives and Christians are often ignored, played down, or even spoken against. And this bothers so many of us. As should be clear by now, I happen to be a conservative, but I am a Christian first. So I see the crucial importance of biblical values and principles as I assess political and ideological parties and positions.

But even leaving aside my Christian concerns, I see many worrying signs in the Libs. Some major issues that all conservatives should rightly be concerned about are repeatedly dismissed by the Liberals. And two of the bigger ones – the ongoing war on marriage, family and children, and the slow but steady elevation of sharia law in Australia – seem to be nowhere on the Liberal’s radar.

And we had the perfect example of this over the past few days. Several Liberal candidates were disendorsed by the Libs, or forced to step down. Why? Were they found out to have been child rapists years ago? Were they found to have a long record of armed robberies?

No, something much worse it seems. One actually made some comments years ago about stealth jihad and creeping sharia, while another asked if the radical homosexual agenda was in the best interests of Australian society. Because of these comments being made over the years – including some on my own site – they were promptly given the flick by the Liberal head honchos.

All the media has been abuzz with stories concerning this over the past few days. Here is part of just one of many reports on this:

A Victorian Liberal candidate has resigned after being embroiled in an extremism row, publicly endorsing an attack on his party colleague, Goldstein MP Tim Wilson, as a “notorious homosexual”. Peter Killin complained to fellow right-wing Liberal Christian activists in December that not enough of them had shown up at a preselection vote for the Liberal heartland seat of Goldstein in 2016 to prevent Mr Wilson from being selected to represent the seat. Mr Killin, who was contesting the Labor-held seat of Wills in Melbourne’s inner north, made his remarks in the comments thread of the blog of Christian-right blogger Bill Muehlenberg. The party confirmed Mr Killin’s resignation on Wednesday afternoon.
www.theage.com.au/federal-election-2019/that-notorious-homosexual-liberal-candidate-in-attack-on-tim-wilson-20190501-p51j0z.html

Hmm, that Killin guy must be one really evil dude. And that Muehlenberg character is obviously beyond the pale. String ‘em both up! Several candidates have now been given the boot, not just for making some rather mild comments on my site, but on other sites as well.

For daring to think what many concerned Australians think, the Liberal Party decided that they could not be one of them. They were just too toxic. We already know that Labor and the Greens would not want them – but the Libs as well? Really? Is this Party now so hyper-PC that anyone who dares to say anything about some of the biggest concerns of our time must be excluded?

My advice to some of these ex-candidates is this: if your very legitimate and reasonable concerns are so detested by the Libs, then why in the world even bother running as a candidate for them? If their views differ barely at all from Labor on these sorts of topics, then why not find a genuine conservative party that DOES represent your values and concerns? Why waste time with these guys if they just want to please everyone and upset nobody?

But it is not just supposedly conservative political parties doing all this. Almost all of Australia’s ‘conservative’ commentators think exactly the same way it seems. The weekly evening run of shows on the Sky News television network is meant to be more or less conservative – sort of the Australian equivalent of Fox News in America.

Well, if last night’s viewing was anything to go on, you can forget about pretending that they are real conservatives. Not even close. Every single one of these so-called conservatives sided with the Libs against these dumped candidates. Not one of them sought to defend them or their concerns. They all washed their hands of them and repeated the lame leftist mantra that they were ‘extremists’ and unrepresentative of conservative values, etc.

Whether it was Andrew Bolt or Paul Murray or a dozen others last night, they all sanctimoniously threw these conservative candidates under the bus. Good grief – give me a break. And one of the most appalling cases of this came from Queensland commentator Daisy Cousens.

Not only did she also quickly condemn the two deposed conservatives, but she actually defended the Labor candidate who had earlier made jokes about rape! I kid you not. She happily defended the sleaze-ball Labor guy (‘oh, it was long ago and no big deal’) while turning on her own people.

Hmm, I don’t think conservative means what these people think it means. And that is just the problem we face in Australia. Sadly most high-profiles conservatives here tend to be secular, and/or libertarian, and/or simply fiscal conservatives.

Thus they are good on some issues: they dislike big government; they support the free market; they are worried about the left’s open border policies; they don’t like identity politics; they are sceptical of the climate zealots; and so on. But on so many crucial issues that so many conservatives and Christians care about deeply, such as the radical homosexual agenda, the war on the unborn, and the Islamisation of the West, most of these folks simply don’t give a rip.

By way of contrast, Fox News in America regularly champions Christian concerns, and regularly stands up against baby-killing and the like. Sure, Fox has atheists and homosexuals among its presenters and commentators, but there are quite a few outspoken and devout born-again Christians who are happy to share their faith and Christian values on the shows.

Yes, America is still much more Christian than Australia is, and Australia is very secular for the most part. But still, a slim majority identify as being Christians here, and many would be concerned about the sorts of things the two dropped candidates stood for.

Those values sure get very little hearing with the Liberal Party for the most part. And their concerns get very little air time with the conservative commentators we have. So it is frustrating indeed, especially when each new election comes around.

So many Australians just do not like the major parties any more, and are looking for some real alternatives. Many smaller alternatives are around, with some being better than others. But until the Libs start representing us instead of ignoring us, their fortunes will likely continue to decline.

And it may already be time to find an alternative to the evening Sky News team. They are good in some areas, but appalling in others. It is time for a change.

Some of you know that one of my main means of communicating truth in the public arena has once again been stripped away from me. I am in yet another 30-day prison sentence from the tolerant and diversity-loving folks at Facebook.

They not only managed to find something I had said many weeks earlier to serve as an excuse for sin-binning me once again, but they so very conveniently made sure I would be imprisoned throughout the entire Australian election period. I will not be released until the election is over.

How convenient indeed FB! So I must rely on you, my readers, to share some of these posts for me on FB. That would be greatly appreciated if you can help me out in this manner. Simply use the FB share button found beneath each of my CW articles thanks.

And I did find it rather amusing that as FB seeks to shut me down and limit my public influence, countless newspapers in Australia yesterday were mentioning me and CultureWatch anyway. I did get a chuckle out of that one!