People always have at least two choices to make in the face of tyranny, repression, censorship, and attacks on their fundamental rights and freedoms: they can stand up and resist, or they can simply submit and give in. Yes, there may be other options, but when push comes to shove, these are the main two responses we can make. 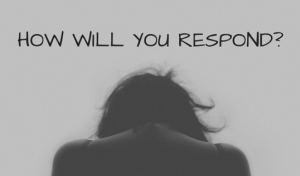 Do we say no to Big Brother tyranny and do what we can to resist the various forms of fascism emerging everywhere in the West, or do we just cowardly give up, refuse to stand for what is right, and just go with the flow? At some point soon we all may need to make such a choice.

I think we should be clear about how we will respond now, and not wait until it is really crunch time. We need to decide ahead of time whether it will be fight or flight. It will do little good when the really hardcore crackdown begins and we finally start to think about this. Make up your minds now!

I discuss all this in light of some recent updates to the ongoing Israel Folau saga. Of course if you have no idea what the Folau saga is all about, you may have been living on the moon for the past month. I only wrote four recent articles on the matter myself! Here are two of them:

The outspoken Christian sportsman has called down upon himself the wrath of nearly everyone – sporting bodies, the media, politicians, commentators, even Christian leaders – all because he thought it was good to share some biblical truth in public. The persecution and opposition have been unrelenting ever since.

But the matter will just not go away quietly. Things are still bubbling along, and just in the past few days we have had other athletes responding to this matter. One took a stand, but then seemed to have quickly backed down and apologised. As one media report says:

Rugby star Samu Kerevi has apologised for ‘offending’ fans after declaring ‘I love Jesus’ in an Instagram post at Easter. The Queensland Reds captain caused controversy among fans when he shared a Bible verse on his Instagram account on Easter Thursday.

The Fijian-born sports star posted a picture of him from a recent match with the caption: ‘For God so loved the world, that he gave his only begotten Son, that whosoever believeth in him should not perish, but have everlasting life.  The 25-year-old added: ‘Thank You Jesus for dying on the cross for me. I love you Jesus.’

While most fans supported Kerevi for promoting his religious beliefs, some questioned whether he would publicly declare his support for gay Australians. ‘I know a lot of gay kids and adults in our sport would love to hear a rugby leader like you say you love and respect them for who they are – are you willing to endorse that message?’ wrote one fan. ‘I hope you don’t support Israel’s comments Samu,’ added a second.

Kerevi later apologised for upsetting some fans with his Easter post, The Australian reported. The rugby ace dedicated his apology to ‘anyone that I have offended in giving praise to our God on a weekend that we take off to celebrate his sacrifice for you and I’. When contacted by the Daily Mail Australia, a spokesman for Queensland Rugby declined to comment ‘as Kerevi had quoted a text from the Bible celebrating Easter’.

Kerevi’s bizarre apology comes as Rugby Australia prepares to hold a hearing about whether star Israel Folau should be stripped of his multi-million dollar contract for saying gays would ‘go to hell’. Rugby Australia will hold a hearing into the Folau matter on Saturday. The 30-year-old, who is a devout Christian, was handed a ‘high level’ breach notice over posts he made on social media on Twitter and Instagram on April 10.
www.dailymail.co.uk/news/article-6974079/Rugby-star-apologises-offended-fans-saying-love-Jesus.html

So he seems to have backtracked big time. But other athletes – notably other Pacific Islanders – are now getting some backbone and supporting Folau in a very public manner. Says one report:

Rugby Australia is facing a potential Polynesian player mutiny after one of the Wallabies’ most exciting prospects claimed all Pacific Islanders “might as well just be sacked” because of their religious beliefs. In an explosive development days out from Israel Folau’s attempt to save his multimillion-dollar career at an RA code of conduct hearing, Queensland Reds and Wallabies hooker Taniela Tupou took to Facebook to express his support for the under-fire superstar.

“Seriously ?????????? Might as well sack me and all the other Pacific Islands rugby players around the world because we have the same Christian beliefs ??????,” Tupou posted late on Tuesday night. I will never apologise for my faith and what i believe in, religion had nothing to do with rugby anyways ???????? #TYJ”

Tupou, aka “Tongan Thor”, attached a link to an earlier post from fellow Wallabies teammate and Reds captain Samu Kerevi, who felt compelled to apologise for taking to Instagram at Easter thanking “Jesus for dying on the cross for me. I love you Jesus#”.”

“I appreciate the kind words from everyone,” Kerevi posted. “But to be clear I’m not apologising for my faith in Jesus Christ my saviour. God will always come first in my life and many other professional rugby players. Today, I felt things were taken out of context in regards to certain articles. I do not feel obliged to apologise to people because of the situation happening right now with a brother of mine.”
au.sports.yahoo.com/sack-us-israel-folau-firestorm-takes-explosive-twist-203942475.html?soc_src=community&fbclid=IwAR36zjBJuQIOXuZf526_kRfVSpwVAPMhPCOCYvML9NEGvx22gWoRyj5cUKQ

According to this second report, Kerevi has not backed down as much as it first appeared. Be that as it may, we do know that overwhelmingly most athletes – whether in rugby or not – have been too cowardly to say anything. Certainly next to none have come out in public support of Folau.

And if they did, they too came under massive attack, with a few also backing down. For example Gary Ablett of the AFL spoke out briefly, then backtracked almost as fast. And an English footballer, Billy Vunipola, has been given real grief by the Rugby Football Union for daring to publicly support Folau as well.

All this underlines the need for all of us Christians to make up our minds ahead of time on where we will stand on these sorts of issues. Will we decide ahead of time to stand strong, proclaim truth, and not worry about the inevitable attacks, including some rather unpleasant consequences, or will we decide that we will not stand and be counted when such a stance is most needed?

The choice is up to you. We either act courageously here or we act cowardly. We either decide that Jesus and the Bible will fearlessly be championed in public – especially as they more and more come under attack – no matter what the negative fallout, or we will decide saving our own skin is more important.

Whose side are you on? You better settle this matter real soon. Things are getting worse by the day in terms of freedom of religion and the ability to live out your faith in the public arena. These six quotes on courage will not go astray here:

“It’s going to demand a lot of courage before too long— to really live and maintain the true Christian life according to the Word of the Living God.” Leonard Ravenhill

“The true follower of Christ will not ask, ‘If I embrace this truth, what will it cost me?’ Rather he will say, ‘This is truth. God help me to walk in it, let come what may!'” A. W. Tozer

When people say ‘You can’t do that, it’s not safe!’ quote Brother Andrew: “God said to go. He didn’t promise you would come back.”

“Rule of thumb: if your principles evaporate the moment courage is required to defend them, you have no principles. You’re a panderer, not a warrior.” Matt Walsh

“Once upon a time, there was a safe, private place to take your controversial stand for Jesus. No more. If you are going to stand, you will be shot at—either figuratively or literally.” John Piper

And three biblical texts come to mind here about making the right choices. They are well worth closing with.

Joshua put it this way (Joshua 24:15): “But if serving the LORD seems undesirable to you, then choose for yourselves this day whom you will serve, whether the gods your forefathers served beyond the River, or the gods of the Amorites, in whose land you are living. But as for me and my household, we will serve the LORD.”

And Elijah issued a similar call for making a choice (1 Kings 18:21): “Elijah went before the people and said, ‘How long will you waver between two opinions? If the LORD is God, follow him; but if Baal is God, follow him’.” Or as Jesus himself put it in Matthew 12:30, “He who is not with me is against me.”

22 Replies to “How Will You Respond to the New Tyranny? We Need to Decide NOW”