“I the Lord do not change.” We find that statement in the Old Testament – in Malachi 3:6. The New Testament affirms the same truth. For example James 1:17 says this: “Every good and perfect gift is from above, coming down from the Father of the heavenly lights, who does not change like shifting shadows.”

Thus what we learn about God and his ways in the Old Testament is what we find in the New. Consider this as an example: The same God who had a covenant relationship with ancient Israel has a living relationship with Israel Folau.

However, the people of God in the Old Testament generally failed to be a light to the nations and share the truth of God with others. In contrast, the Christian rugby player has sought to humbly share truth with those who do not know God. Yahweh had wanted Israel to be a blessing to the world, and he wants his people today to be the same. 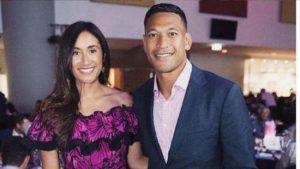 That in a nutshell explains why Israel Folau did what he did and said what he said. He is obeying God, loving others, and seeking to share biblical truth with them. Izzy has simply done what all true Christians have done for the past 2000 years – he has shared the gospel with the lost.

He has been evangelistic – he has shared the evangel, or good news. All genuine Christians do this. There is nothing strange or unusual about it. And it is a love for the lost that spurs believers on in this regard. Because they love God, they share his love for those who do not know him. They take seriously basic biblical truths such as the reality of a lost eternity for those who are not reconciled to God.

Christians like Folau simply adhere to basic beliefs that Jesus taught. Chief among them is what we find in John 3:16: “For God so loved the world that he gave his one and only Son, that whoever believes in him shall not perish but have eternal life.”

They also believe what Jesus said just two verses later: “Whoever believes in him is not condemned, but whoever does not believe stands condemned already because they have not believed in the name of God’s one and only Son.” That is a good summary of the gospel.

Lest you think I or Izzy may still be getting this wrong, let me offer a few more verses. They all speak to the essential need of repentance and receiving the gospel. Consider three individuals who should know all about this: John the Baptist, Jesus and Peter:

Matthew 3:1-2 John the Baptist came, preaching in the wilderness of Judea and saying, “Repent, for the kingdom of heaven has come near.”

Mark 1:14-15 After John was put in prison, Jesus went into Galilee, proclaiming the good news of God. “The time has come,” he said. “The kingdom of God has come near. Repent and believe the good news!”

Acts 3:19 “Repent, then, and turn to God, so that your sins may be wiped out, that times of refreshing may come from the Lord.”

We are all lost sinners, under the just condemnation of a holy God. But Jesus took the punishment we deserved by dying a cruel death on the cross, so that those who turn to him in faith and repentance can escape hell and live with God forever.

That is tremendous news – terrific good news. How could any Christian not want to share that with everyone? It is unloving to not share the gospel. Joe Carter just recently wrote about Gay Pride Month and the Christian response. He echoes my thoughts:

We do not love our neighbor when we tell them they can continue to engage in unrepentant rebellion against God. We cannot continue with the “go along to get along” mentality that is leading those we claim to love to destruction. If we truly love our LGBT neighbors, we must speak the Word of God with boldness (Acts 4:31). We may have to accept the fact that those who have fallen away may not ever return, but we shouldn’t lead them to hell because we are too craven to tell them the gospel requires repentance. We must choose whom we will serve. Will we love our neighbors and stand with the only wise God, or will we hate our LGBT friends by allying with the foolish idol-makers of LGBT Pride Month?
www.thegospelcoalition.org/article/lgbt-pride-month-became-religious-holiday/

Quite right. And that is just what Israel Folau has done. He cares enough about lost sinners – including homosexuals – that he has a passion to share that good news with them. All Christians should have this passion. All Christians are to be evangelistic. Missions and evangelism are a core part of our faith.

Yesterday I wrote on this very matter. I mentioned how half of all millennial Christians think sharing their faith is wrong: billmuehlenberg.com/2019/06/30/there-is-no-proclamation-free-gospel/

And another recent report has found that half of all Protestants have not shared their faith in the past 6 months.
www.christianpost.com/news/over-half-of-protestant-churchgoers-failed-to-share-the-gospel-in-the-last-6-months-lifeway.html

Hmm, maybe this explains why some Christians are hating on Folau: they feel guilty about the fact that they are not evangelising, so they lash out at those who do. This reminds me of the story concerning the great evangelist D. L. Moody:

People like Folau are simply doing their Christian duty. And they are motivated by a love for God and a love for the lost. This is what Christianity is all about. The Apostle Paul even put it this way: “Woe is me if I do not preach the gospel” (1 Corinthians 9:16).

So our God does not change. He has always sought to have a people for himself, and he has always expected his people to be a light in a dark world, sharing with others what they themselves have found. The God of ancient Israel is the God of Israel Folau, and all those who love the Lord and seek to share the gospel.

The great preacher and evangelist Charles Spurgeon spoke much on this matter. Let me offer some of his powerful and inspiring thoughts on this:

“Every Christian is either a missionary or an impostor.”

“Have you no wish for others to be saved? Then you’re not saved yourself, be sure of that!”

“God save us from living in comfort while sinners are sinking into hell!”

“If sinners will be damned, at least let them leap to Hell over our bodies. And if they will perish, let them perish with our arms about their knees, imploring them to stay. If Hell must be filled, at least let it be filled in the teeth of our exertions, and let not one go there unwarned and unprayed for.”

“I will not believe that you have tasted the honey of the gospel if you can eat it all to yourself.”

“If we had to preach to thousands year after year, and never rescued but one soul, that one soul would be a full reward for all our labour, for a soul is of countless price.”

“Lost! Lost! Lost! Better a whole world on fire than a soul lost! Better every star quenched and the skies a wreck than a single soul to be lost!”

“If you really long to save men’s souls, you must tell them a great deal of disagreeable truth.”

And that last quote sums up this whole saga with Israel Folau. Of course the gospel is disagreeable to sinners. It is offensive to them. Paul could speak about the “offence of the gospel”. Telling arrogant and defiant sinners that God is not pleased with them and they are headed to hell unless they repent is not what they want to hear.

But it is what they need to hear. Thus I will always side with the God of Israel over against all the carnal Christians and armchair critics who condemn true believers who share their faith, while they never do anything to reach the lost.