Yesterday I did two things which have become the basis for this article. One, I wrote a review of the new book by David Horowitz. Two, I came across a new article by Douglas Wilson. Both men happened to be friends with the late atheist Christopher Hitchens, but that is another matter.

Here I wish to discuss a topic that both men wrote about: Pelagianism. Pelaga-who? More on this in a moment. But the interesting thing is Horowitz is a Jewish ex-Marxist and agnostic, while Wilson is a biblical Christian. But both could clearly see how the heresy of Pelagianism is coming forth with a vengeance in our culture wars today.

So let me offer a brief explanation of this. Before Calvin and Arminius locked horns over questions of the nature of sin and man’s ability to please God, Augustine and Pelagius were debating this. Pelagius (350-425) was a British monk who eventually went to North Africa where he and Augustine, the Bishop of Hippo in present-day Algeria, had sharp disagreements on core biblical truths. 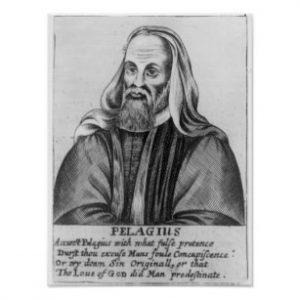 Augustine, following Paul, emphasised our lost sinful condition and our overwhelming need for grace. We are incapable of saving ourselves and are in desperate need of outside (divine) help. Pelagius however taught that man is not really so fallen, and Adam’s sin had no real impact on his descendants.

So original sin is denied, and man is seen as basically good. Paul and Augustine beg to differ. So damaging is the Fall and so pervasive is sin that man by himself cannot please God or even fully seek God. Simply put, without God and his grace, we are all toast. Indeed, we see the reality of man’s fallen condition everywhere.

As Chesterton once put it, the doctrine of original sin is the one clearly verifiable, empirical Christian doctrine. Or, more precisely, as he stated in Orthodoxy: “Certain new theologians dispute original sin, which is the only part of Christian theology which can really be proved.”

So what does all this have to do with the culture wars? It should be rather obvious actually. If man is basically good, then where do we get evil from? The Marxist and leftist response is simple: it is society or oppressive social and economic structures that are the problem.

So if we change society we can bring in a brave new world where everyone gets along just swimmingly. It is not the human heart that needs changing, it is ‘evil’ things like capitalism, or patriarchy, or militarism, or America, or chauvinism, or nationalism, etc.

But as you might have noticed, we tried to implement this version of events last century. We tried creating a new and just and fair society – but all it did was result in millions of people being killed. When you get the diagnosis wrong, you will always get the remedy wrong.

No amount of tampering with society will change anything as long as the human heart remains corrupt and evil. Internal surgery is required – heart surgery to be exact – and not external Band-Aid quick fixes. It is just as Jeremiah put it: “They have healed the wound of my people lightly” (Jer. 6:14).

Or as Jesus put it, “Those who are well have no need of a physician, but those who are sick” (Luke 5:31). Our problems are deep-seated indeed, and only deep-seated cures will be of any use. Real sickness requires a real physician.

But let me draw upon these two thinkers and share what they had to say about all this. Horowitz the agnostic just penned an excellent book of the left’s war on America and on Christianity. He was a hard-core Marxist for much of his early life, but eventually he saw the light and rejected his leftism. See my review of this excellent book here: billmuehlenberg.com/2019/07/15/a-review-of-dark-agenda-by-david-horowitz/

In one chapter he speaks about the leftist vision: “As progressives and world-changers, we were not interested in the fate of individual souls. Our cause was the salvation of mankind. . . . Like the religionists whom they looked down on, my parents and their leftist friends believed in a redemption, but they thought of themselves as the redeemers, not God.”

And now the leftists do not speak about “Communism,” but about “social justice”. He then explains what Pelagius taught, and goes on to show how this connects with leftism: “Pelagius shared the view of today’s progressives – the view that people are naturally good, but society leads them down paths that are bad. . . . The Pelagian heresy is no different from the progressive notion that if human beings can be made to pursue lives that are politically correct, they can bring about a world of social justice.”

Horowitz then talks about how he eventually came to reject his own leftism: the murder of his friend at the hands of the radical Black Panthers. Betty Van Patter was a “dedicated, kindhearted leftist and a mother of three children” who sought to help out the Panthers.

When she got wind of some shady dealings by the Panthers, and wanted to help them, they turned on her, viewing her as a white woman who could not be trusted. So they killed her: “She had been raped and tortured and beaten to death.” But incredibly the “left defended the killers because they were voices of the oppressed and champions of the progressive cause.”

This is what finally pushed Horowitz out of his leftist delusions: “That murder – and that silence – shattered my faith in everything I had believed in until then.” Yes, he was mugged by reality. Or, reverting back to theological terms, he came to see that Paul and Augustine were dead right, and Pelagius dead wrong.

Now let me run with the new article by Wilson on this. He also speaks about the Pelagian error, and ties it in to the culture wars – particularly, homosexuality and how we should think about it. He reminds us about the importance of the debate, and how it impacts so much else.

He writes: “In theology, there are two foundational approaches to human nature out there, and they are the Augustinian and the Pelagian. Calvinism is simply a later nickname given to the Augustinian approach.” He goes on to say this:

Our dilemma is that we want to be saved, but we want to be saved without admitting the full reality of what we are being saved from. In our rationalizations, when we articulate what we think salvation must be trying to get at (our felt needs, our sense of brokenness, and the fact that we are widdle wambs who have gone astway), we routinely minimize what is actually at stake. “But when Jesus heard that, he said unto them, They that be whole need not a physician, but they that are sick” (Matt. 9:12).

So God saves us from what we are, and not simply from the consequences of disembodied deeds out of the past. And because Augustinians believe we must be saved from what we are, this accounts for the disparity in the two different kinds of responses to sin. The Pelagians offer the sinner some lavender water. The Augustinians offer oak-aged Laphroaig, which, as the ad copy puts it, tastes like burning hospital. The Pelagians offer the sinner a teeny little pill, child’s aspirin in a micro-dose. The Augustinians see you are the color of leprous putty and so they go to a vet they know in the neighborhood in order to get some horse doses of antibiotic Calvinism, the kind that could knock out a couple of Clydesdales.

The need of the hour is not for somebody to urge you into your best life now. We need everybody in Judea to head down to the Jordan, and in order to get that to happen we need to ask God to send us some kind of Tishbite Calvinist preacher who will pin our ears back, and not feel sorry about it afterwards.

He then applies this to the debate over same-sex attraction. He concludes with these words:

So we are in a pretty bad way. We have gotten to the point where the moral compass of evangelicalism is now being calibrated by the sex wishes of twelve-year-old boys. What could go wrong? If you want to see our people delivered, then pray for God to raise up that Tishbite. Pray for a swarm of such preachers, who love the Word of God more than they love our secret lusts.
dougwils.com/books-and-culture/s7-engaging-the-culture/emoting-like-pelagians.html

Theology matters, and it has hugely important implications even for things like today’s sex wars. How we view humanity and sin will determine how we seek to address various social issues. Today’s culture wars are a reflection of these two fundamentally different ways of looking at these matters.

Horowitz had to learn this the hard way. I am glad he finally did see the light. But so much of the Western world has not learned this lesson. That in large measure explains what ails us, and why the culture wars continue to explode with no resolution in sight.

10 Replies to “Pelagianism and the Culture Wars”