An odd title, but some might find theology to be a little odd. But theological investigations can be of real use in helping us better understand Scripture. And sometimes knowing a bit of Latin can be rather useful as well. So today I wish to look at the issue of sin and offer a brief Latin lesson along the way. Here are just a few key Latin terms and phrases having to do with sin: 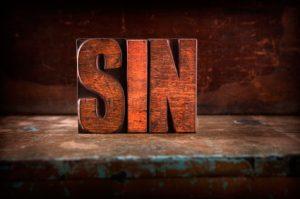 More on those in a moment. Various words that we use in English come from the Latin root. For example, we speak of a peccadillo, which has to do with a minor fault or sin. We speak of overlooking a person’s peccadillos. Or we say something is impeccable, which means faultless or of the highest standard. We say someone has impeccable taste in wine for example.

Please note – I am not an expert in Latin, so I am relying on others here to a large extent. But in this article I want to look at three individuals and how sin impacts them, or how they stand in relation to sin: Adam (before and after the Fall); Christ; and the believer. All my discussions involve Latin words and phrases.

How are we to think about Adam in terms of sin before the Fall? And after it? The great Western theologian Augustine provided some useful thoughts here to help us understand and summarise the biblical data. He offered us this fourfold scheme of things:

That is not a bad overview of the matter of sin, and how it impacts both Adam and the rest of the human family. It obviously entails other larger theological discussions, including the issue of original sin and the nature and destiny of man.

Numerous other Christians and theologians have picked up on this version of events, including the 1647 Westminster Confession of Faith (see Chapter 9 on Free Will), and the 1720 work of 500 pages by the Scottish Puritan Thomas Boston, Human Nature In Its Fourfold State.

Needless to say, not everyone accepts this position, and plenty of theological discussion and debate can arise here. But I am simply introducing this line of thought at this point. Future articles will have to look in much more detail at the various pros and cons involved.

A related, but somewhat different matter, and one that can be hotly debated, has to do with Jesus and whether he was able to sin while on earth. That he was tempted is clear enough from Scripture, but was he able to succumb to those temptations? Might he have fallen? Or was he not able to sin?

The way the question is usually formulated is this: “Was Jesus able not to sin, or was he not able to sin?” Moving a few small words around of course makes all the difference. And this is not mere vain speculation, but involves some core Christian beliefs.

This is in fact a very large discussion indeed, and it goes to the heart of our understanding of Christology. And it especially depends on how we understand the two natures of Christ in one person. Orthodox biblical teaching has always held that Christ is one person, yet with two natures: a divine nature and a human nature.

It is here that the discussion really takes place as we seek to decide whether Jesus could have sinned or not. Once again we have two important Latin phrases that come to our aid here:

A key passage here is Hebrews 4:15: “For we do not have a high priest who is unable to sympathize with our weaknesses, but we have one who has been tempted in every way, just as we are – yet was without sin.” But we would need to look at many more bits of the biblical data on this to make any solid headway.

I cannot here fully enter into this massive debate and I will need to write another article or two to do it justice. Some of the greatest minds in Christendom have of course carefully looked at this issue over the centuries, and the debate continues, often depending on what theological positions one adheres to.

Great Christian thinkers have indeed differed on this matter. Suffice it to say that I also have a position on this, but I realise that there can be some room to move here. I tend to fall on the side that argues that Christ was NOT able to sin, such was the union of the divine and human natures.

But as mentioned, this is another theological hot potato, with believers falling on both sides of the debate, and good arguments can be offered for both. Here I am simply introducing the topic to you. Those who once again want to go on the warpath and launch an all-out assault on any perceived heresies I might be offering here are advised to ether tone it down greatly, or take it elsewhere!

Sin and the Christian

There is one more Latin concept that I very briefly want to look at here. What I said about Adam and Eve after the Fall of course applies to all people today. But there is another issue that arises, so I wish to bring up a final Latin phrase, this one offered to us by Martin Luther.

He said this: “simul justus et peccator.” One can guess at the terms in question – one who is simultaneously just and a sinner. More specifically, Luther argued that the regenerate person is “at once justified and a sinner.” Believers are at the same time in one sense, just, and in another sense, sinners.

The Christian is both perfectly justified (because of the finished work of Christ), and yet is still able to sin, because he still retains a sinful nature. That is a core theological truth emphasised at the time of the Reformation. It involves a double imputation: our sin is imputed to Christ, and his righteousness is imputed to us. A glorious exchange.

That realisation may be of some help to Christians, and I happen to find it useful. But I know of course that major debates can and do erupt over this. Not everyone accepts what is being taught here, and some – including those pushing versions of Christian perfectionism – may well want to disagree here.

In sum, I am quite aware of the differing positions that believers can hold to regarding all three of these subheadings. My main task here was to simply introduce some of these concepts and phrases for those who might be interested. If you are not interested – or easily triggered – please look away now!

A necessary afterword, once again

Sadly, more and more often I find that I have to conclude a piece on theology with a word like this. It is both a word of warning and a plea. The truth is, there are many theological hotheads out there, ever ready to go on the attack. They will spring into action as soon as they detect someone pushing a slightly different point of view.

Some are really no better than trolls, which – as my commenting rules clearly state – are NOT allowed here. Some might just be grumpy old men with nothing better to do. Some just like to argue till the cows come home. And some just like to see their name in print!

My advice to many of these folks is pretty simple: it might be best if you simply open up your own website. That way you can opine to your heart’s content. You can pontificate all day long. You can run nonstop with your pet theological peeves. You can hold court 24/7.

I obviously do not mind proper discussion: some 70,000 published comments on this site makes that quite clear. But I do tire of those who just come here to argue, to prove they are right, to show their theological “superiority,” to have the last word, and so on.

And as I mentioned, this is just the briefest of pieces – just a sketchy introduction to what are some very complex and serious discussions. I have not said all that there is to say on these matters. Entire libraries have been filled with books on these topics. Having read, studied, written and taught theology for nearly half a century now, I am fully aware of the pros and cons of these debates.

If I were to write a much longer and more substantive piece on any of the above matters, then a helpful discussion might better take place. But remember that I am not writing a thesis here. I am not appealing solely to PhDs. Hopefully they may benefit a bit.

But my main audience – as always – is the general public. In this case it is simply everyday Christians, many of whom may well need a bit more prodding in basic theological understanding. So I basically seek to popularise things here. If I wanted to write much more scholarly articles with plenty of footnotes, I could. But that is not what this website is all about.

If you want to share your thoughts – bearing in mind my commenting rules – please feel free to do so. I do not want to deter those who genuinely want to discuss things in a courteous, polite and humble fashion. But know-it-alls and theological snobs are advised to go elsewhere thanks.

I have had far too many theological pugilists coming here over the years seeking a fight. I much prefer those coming here with honest questions looking for honest answers than those who get their kicks out of engaging in yet more theological turf wars. OK?